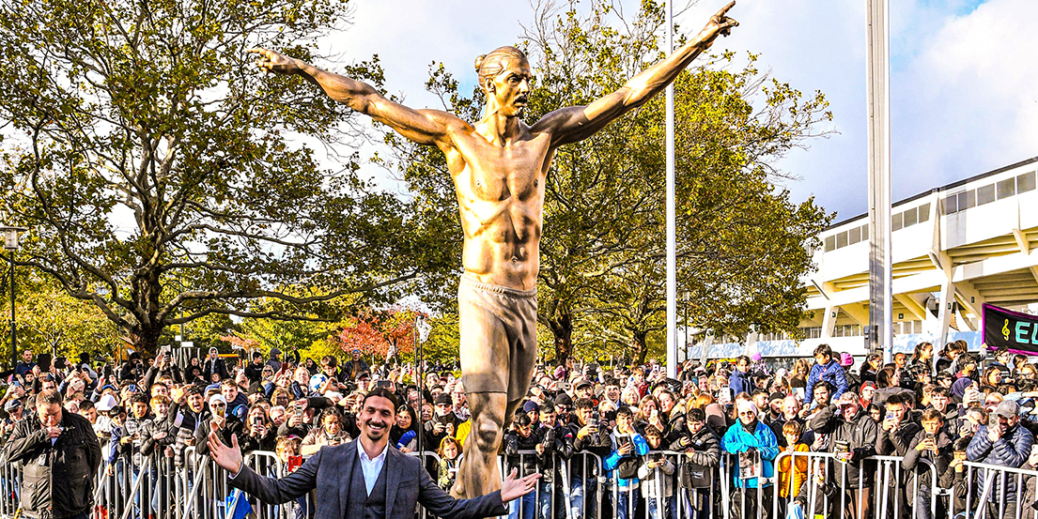 Zlatan Ibrahimović is good at soccer. In fact, he’s so good that in 2016, during a Sweden national soccer award ceremony, it was announced that he would be honored with a statue to pay homage to what is considered to be the best soccer career by any Swede ever.

In a 2016 Instagram post, the Swedish striker reflected, “After 20 years of hard work I got a statue in the capital city of Sweden. Who else. Super proud, happy, emotional, wow and thank you Sweden.”

On October 8, in Malmö, Sweden, Ibrahimović was joined by a crowd of more than 200 people and officials from the Swedish Football Association, who commissioned the statue, at an unveiling ceremony.

According to the Danish Broadcasting Corporation, the statue is situated, “In Zlatan’s hometown near Malmö FF’s football stadium.” Perhaps fittingly, it sits outside the stadium where he started his career more than 20 years ago.

The statue, which was brought to life by Swedish sculptor Peter Linde, was crafted out of bronze, stands an impressive 9 feet tall and weighs in at more than 1,000 pounds.

“It feels unreal. Many are thinking ‘why him?’ and so on, but after all the hard work over 15 years in the national team and 20 years in my club career, it feels like it’s being appreciated,” Ibrahimović said at the unveiling. “You usually get this after you die, but I still feel alive. When I die, this will live on forever.”

And while the statue stands to honor what has been an incredible career, Zlatan still is getting it done professionally, playing in the MLS for the LA Galaxy. He next will take the pitch in an Oct. 20 MLS Cup Playoffs road game against the Minnesota United. If they advance, Zlatan and the Galaxy will take on crosstown rivals LAFC in the conference semifinals on Oct. 24.