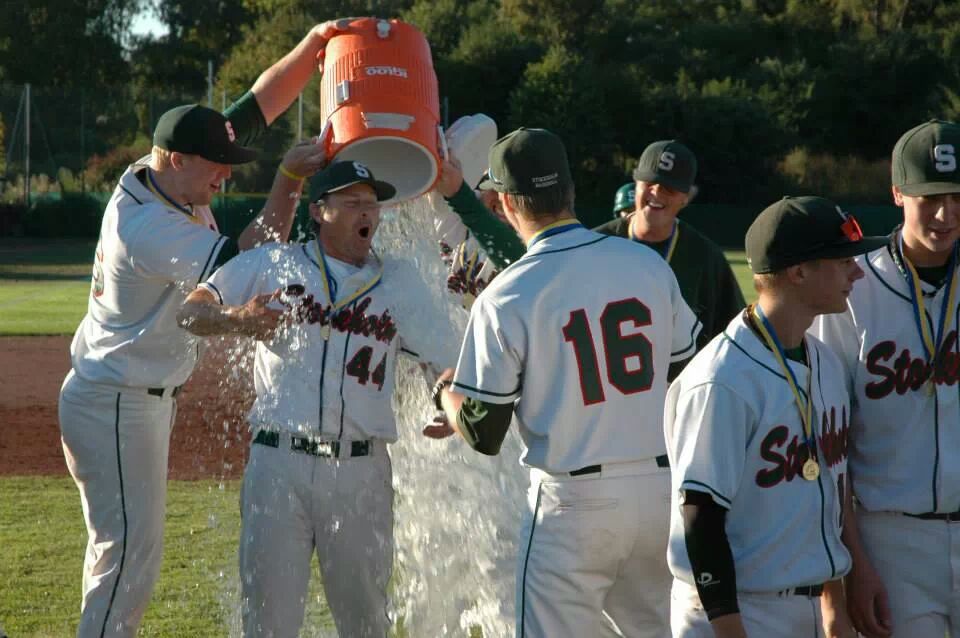 All eyes are on Chicago and Cleveland as the historically cursed franchises clash in the World Series.

Even in Sweden, where an American named Trevor Rooper woke up around 4 a.m. to catch the last few innings of Game 1 before he had to go to work.

Rooper, who grew up in Oregon, knows a thing or two about championships. He’s guided the Stockholm Monarchs of the Stockholm Baseball Club to three Swedish national championships the past four years. Rooper has coached all over the world, including the United States, most recently at Clackamas (Ore.) Community College from 2008-10.

We caught up with Rooper, who also works as a painter, to get a feel for what baseball is like in Sweden.

Tell us about your playing career in the United States.

I consider myself a baseball junkie. I grew up with two younger brothers, and if we were not playing baseball we were watching or listening to baseball. I started playing like many Americans at the age of 5 or 6 and played competitively until I was 32 years old. I played high school baseball, a bit of college baseball and for many years I played what I call semi-professional baseball, city league with traveling. We would drive up and down the West Coast playing games while also playing in the local cities. Sometimes, for example in Kamloops, Canada, we played for money.

How did you get into coaching?

After my playing days were over I wanted to stay on the field, and coaching and or managing teams was the natural progression. I have always felt as big a part of the game managing, and it was simply a way to continue the game.

How did it lead to coaching baseball in Sweden?

One year in the winter of 2006, a friend of mine who played centerfield for the team I was managing that year had a friend playing baseball in Holland, and the Holland team needed a coach/manager for 2006 and they were looking to America to fill the void. I was willing, able and qualified so I went, which began a 10-year odyssey of coaching in Holland, Australia, back to the States and Austria. In 2012, I decided I wanted to have a baseball year in Norway or Sweden as I have always wanted to visit Scandinavia, I found out about a job opening in Stockholm and after interviews on Skype and whatnot, I was offered the job for 2013. I have been coaching at Stockholm since, and we have won three national championships in this period.

What were your first impressions of baseball in Sweden?

Since Sweden was my fifth gig coaching baseball around the world, I had a fairly good idea about how it would be. I must say I was a little surprised at the quality of my team when I finally made it to Sweden. We had several players who played college baseball in the States, and one named Magnus Pilegård [UNC Wilmington] played in Division I. Also, we had two brothers, Björn and Peter Johannessen, who would rival any American in talent and passion for the game. The game was better than I thought it would be, actually. Of course, the depth was and still is not so great as in all of Europe, there just are not enough players. As you probably know, soccer rules Europe and in Sweden, soccer and hockey rule.

How long have you been in Sweden? And how have your teams changed over the years?

I have been managing the Stockholm team every summer from 2013-2016; we won the gold medal (first place, national champions) the first three years and took silver this past year. This past year was a definite transition year as many of our top players had decided to quit playing because of family obligations, or just had enough, or moved on to bigger and more competitive leagues like the German League. So, in all, the team has gone from a veteran-laden, experienced team to a team full of young hopefuls making their mark now.

How would you compare the highest levels of Swedish baseball with American baseball?

The differences in the game of baseball between Sweden and America boil down to the fact that baseball is not Sweden’s game, meaning kids don’t grow up playing and watching baseball, they are not subjected to it. Some kids in Sweden start playing baseball when they are 6, actually more and more, but most baseball players in Sweden start around the age of 12 after all other sports have cast them aside. The highest level of baseball in Sweden called the Elite series, which my team plays, is comparable to a junior college game, maybe more high school, but the majority of the players in Sweden at the elite series are grown men, so they have strength and power of men, so it’s hard to compare. It depends on who is pitching or how many pitchers a team has. Pitching is extremely short on talent in Sweden, and is the No. 1 issue with the Swedish national team doing better in worldwide tournaments.

Comparing the high level in the States and Sweden is practically unfair. There are so many more players and so much more interest in the States, as well as opportunities in the States. Sweden players have nothing to shoot for really, no scholarships for college, no professional baseball, one cannot make a living at it. It’s simply played for the pure love and enjoyment, although more and more kids are starting to migrate for the States and play in colleges in the States. We have two members from our club playing in the States right now.

What does a normal day look like for you?

A normal day involves me arriving to the field around 4 p.m. and [taking care of] them, practicing from 6 to 8. We play games on Saturdays and Sundays. I will run three practices per week, and we will play three games per weekend. In the spring and early summer, I visit schools around Stockholm and teach or show the game. So, let’s say the day is May 2, Tuesday: Awake, take my bag of mitts, baseballs and bats to a school, come home eat then off to the field for practice. Game day on Saturday, depending on where we play – home or away – is an all-day affair.

What do people, particularly Americans, say when you tell them what you do?

Americans that I meet in Sweden usually have no idea that baseball existed in Sweden, although many of the players, especially at the youth level, have an American influence. One of the parents may be from America. Americans also never thought of playing baseball in Sweden. How do you play in the snow? It’s a novel idea for them.

What is it like living in Sweden? What are some of your favorite things to do?

For me now, Sweden has become home. I married this past summer and we are very happy. Her name is Åsa Lindfors, she comes from the north of Sweden, but has lived in Stockholm the past 27 years. I met her the first summer I was here in 2013. I am quite happy here. Now I must take a job after baseball, so I was lucky to have a tradesman background, and I work as a painter.

There are many things to like about Sweden, cold, gray rainy days in October and November are not some of these. The summers are magnificent here, healthcare is great, wages are good, rents are low, it’s easy to get around. Some of our favorite things to do are to take a boat around and out into the wonderful archipelago, enjoy a nice meal with friends, simple things. There are lots of places to sit and enjoy picturesque views of water, city and trees. Stockholm is a city situated on 14 islands, it’s great with the amount of water around. We live close to a hill that is skied upon in the winter; they actually held a world cup race last winter, so we like to walk up the hill and around in the nearby forest.

A way of life. Baseball mimics life and society. I am the baseball junkie.