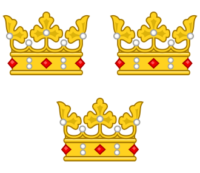 Tre Kronor, aka three crowns, is a symbol that appears in many places in Swedish culture – from the Swedish coat of arms to Sweden’s national hockey team.

Like we did with the dala horse, here’s another 5 “W” lesson, breaking down Tre Kronor.

Early theories attribute Tre Kronor back to Albrekt of Mecklenburg, but later discoveries debunked that. It’s more likely that Magnus Eriksson was the one responsible for its rise to fame.

Tre Kronor translates to “three crowns,” which are positioned in a triangle pattern, with two crowns on the top and one centered beneath the two.

Tre Kronor is used across Scandinavia and Europe, from Ireland and Scotland to France and Germany. The emblem appears in Sweden’s coat of arms, which is used to represent the royal family, and is also in the logo for Sweden’s government offices. More casual uses of the emblem appear on the national hockey team’s jerseys, and a nod to Tre Kronor also appears on the Skor candy bar.

Crowns can represent power – both from the church and from the monarchy.

Tre Kronor also has made its way to the States in the form of a Scandinavian restaurant in Chicago with the same name. Tre Kronor’s menu has a mix of American and Scandinavian items, including Swedish pancakes, aquavit-cured gravlax and Swedish meatballs.