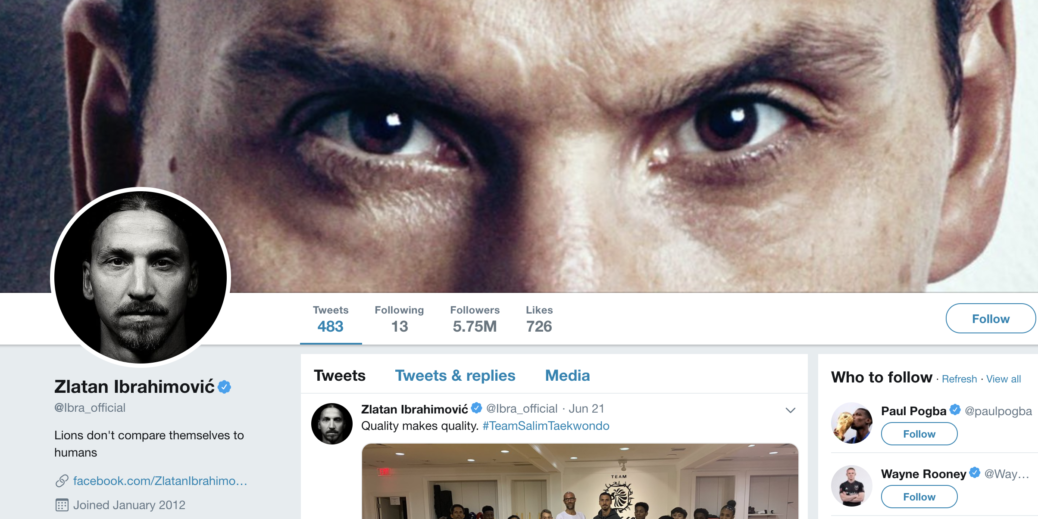 Twitter is one of our favorite social media channels for mindless scrolling and random factoid gathering. All you need to do is click on one hashtag, and before you know it, you’re in a weird and amazing corner of the internet.

For all your Swedish reading pleasure, we’ve pulled 10 Swedish Twitter accounts that are worth a follow, and maybe even a RT or two. And while we like these accounts, we’re obviously partial to @UmgasTheMag, so give us a follow.

Now that @Sweden has been archived, and the popular “Curators of Sweden” program has come to an end, this is the main account to follow for all-things Sweden.

If you appreciate muscles and snark, then it’s worth giving Zlatan a follow. Oh, and there’s soccer, too.

While this account shares a lot from @SwedenSe, the Consulate General of Sweden in New York also shares content specific to the United States.

Together with the the Nordic Consulates in New York we are inviting you to march with us in the NYC World Pride on June 30th! It’s free to join, but you need to secure your spot by signing up through Eventbrite.
#nordicsforequality #swedennewyork https://t.co/T0C9dv3PFt

Stockholm went head to head with Milan in a bid for hosting the 2026 winter Olympics. This account was aspirational, and we were heartbroken to see Milan selected when the commission made its selection on June 24.

If you’re a foodie, particularly in Minneapolis, give this account a follow. Even if you aren’t in Minnesota, there’s a lot of pretty Swedish food and drink photos to stare at.

Part humor, part social advocacy, part political snark, this Skarsgård brother isn’t the most well-known, but he’s one of the most vocal.

Guys it’s official. I’m the king around here. @EW would never lie to us. Where’s my crown? pic.twitter.com/fqdyQ8NW87

OK, not an official Swedish account (you can follow the official channel at @IKEAUSA), but we love everything about a page with continuous IKEA hacks.

If you’re looking for news about Sweden’s impact felt around the globe, check out this account. Tweets are in both English and Swedish.

After Silicon Valley, Stockholm produces the highest number of so-called “unicorns” per capita. Through expert visits, we want to increase knowledge and enable new collaborations. https://t.co/6Bc2e18XuD

We have no idea who is running this account, but if you like random ABBA trivia, you’ve come to the right place. Oh, and if you’re into photos like this…

If you’re into campy music competitions, give the official Melodifestivalen channel a follow. It’s on a hiatus until competition kicks back up, but you can get the scoop here.