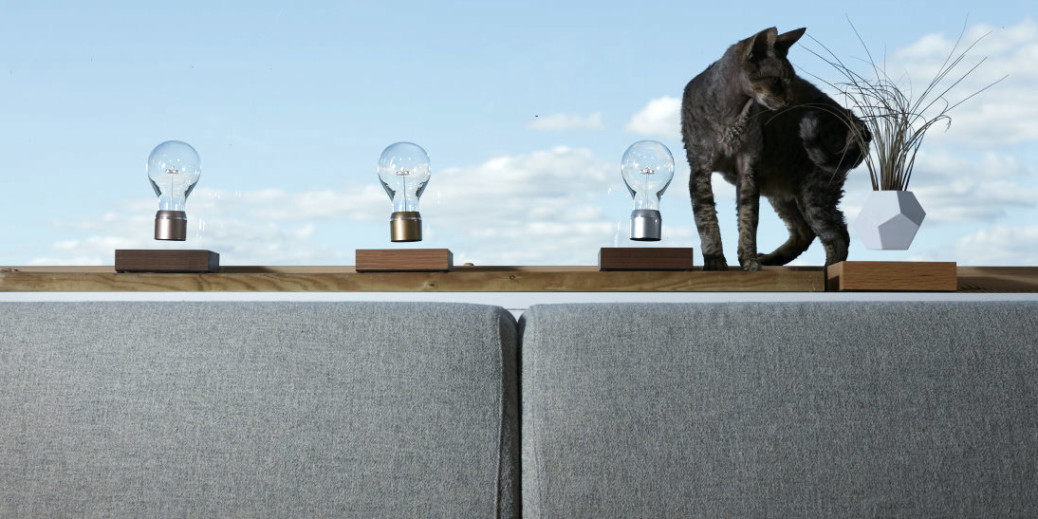 Simon Morris took his fascination with free-floating objects and levitation to new heights by launching the Swedish startup FLYTE.

“His early prototypes were for hoverboards, which caught the attention of and led to projects with major corporations like Nike and Urbanears, and eventually this lifelong passion became FLYTE,” said Daniel Mascarenhas, who helped Morris co-found FLYTE, a company that creates gravity-defying items like lights, planters and clocks.

Since the duo launched the company three years ago, it has grown globally with a flagship in Stockholm and satellite office in Riga, Latvia.

“We’re still a small startup, but we’re excited to continue growing and seeing what the future brings,” Mascarenhas said.

FLYTE (the Swedish word for “float”) debuted its first product in 2015 – a sleek LED light bulb that levitates over a sustainably sourced base crafted from oak, ash or walnut wood. “It’s the levitation aspect that is the most engaging part of the object,” Mascarenhas said. “The visual gap created in the item by the magnetic levitation catches the eye and makes for a unique decorative experience.”

The creators achieved levitation from electromagnetism and a microprocessor that stabilizes the magnetic field. The high-tech products also use resonant inductive coupling (wireless power transfer, in layman’s terms).

The LYFE planter, a 12-sided geodesic container, is made from molded silicon and at six inches in diameter is the perfect size to hold a small cactus, succulent or air plant. Using electromagnetism, the planter floats and rotates midair, and a drainage system is cleverly tucked into the bottom of the geode to prevent overwatering.

STORY, the company’s minimalist clock, showcases a LED matrix on the surface of the clocks face, displaying information like moon phases, temperature using color, along with the time. Using electromagnetism, a metal ball orbits around the clock’s face, a metaphor for the earth rotating around the sun.

ARC, the company’s latest product, is an LED-pendant light bulb that is dimmable and energy efficient with a life expectancy of 30,000 hours, which is relatively 14 years at six hours each day.

FLYTE’s gravity-defying products can be found in a few stores in the U.S., and the company is looking to expand further.

“We’re a young company, and Europe is still our largest market, but we’re now focusing on increasing our brand awareness in the U.S.,” Mascarenhas said. “We’ve mostly been selling in a few flagship shops, but we are now working with a distributor and expanding our range of shops across the country.”

In the United States, the FLYTE levitating light bulb retails at $349 and the LYFE planter at $249. For a list of U.S. stores that sell FLYTE products, click here.