Arvid Rosengren can’t pinpoint a big “aha” moment when he fell in love in wine. Rather, the path to a wine career unfolded in front of him, starting when a pretty basic wine from the Italian Piedmont made him sit up and question how all those flavors got into that bottle.

“I’d always been interested in gastronomy, and growing up, I dreamt of going into the kitchen more than anything else,” he said.

While he didn’t land behind the stove, he discovered a related love that brought him to the top of his field.

Rosengren just ended his three-year reign as the Best Sommelier of the World as determined by the French-based Association de la Sommellerie Internationale. Now in its 50th year, the competition encourages sommeliers – or wine stewards – to perfect their skills and engage more widely with guests.

He’s still on what he terms a very long hiatus from his traditional studies, where he was pursuing a degree in nanotech engineering back in his native Sweden, after growing up in the southern part of the country. A summer internship working in the restaurant business opened his eyes to another opportunity possibility.

“You could say I went down another academic route,” said Rosengren, whose years on the competition circuit were as much about book learning in history, geography and other subjects as on developing and maturing his tasting palette.

“I realized that wine could satisfy both my interest in hospitality and that nerdy side of having to read and study and gather all the facts – and try to figure out what it is that something tasting the way that it does,” added Rosengren, who moved to the United States in 2015.

Because so many factors go into the development of a wine and its flavor profile, the required knowledge about both the scientific structure and the cultural, historical and geological influences triggered him to pursue this career.

Over the first part of those three years atop the world’s sommeliers, Rosengren travelled extensively, gaining access to exclusive bottlings and sharing his expertise. In the past year or so, he decided it was time to invest in his future, which includes his wife and young daughter, as well as his year-old New York City restaurant, Legacy Records.

Going back a century or so to the days of Georges-Auguste Escoffier, the French culinary pioneer who shaped the traditions of hotels and restaurants from the late 1800s, the role of the sommelier was in the background. The maître d’hôtel was the person who greeted the guests, knew their first names and orchestrated everything in the world’s finest dining rooms.

In today’s modern era, the maître d’ has transitioned to become a restaurant manager, handling staff and other operational issues. For Rosengren, that has allowed the once-traditional role of the sommelier to evolve.

“It’s really become the person I think is closest to the guest,” he said. “I think it’s great. It allows me to do what I like doing, which is taking care of people and hopefully serving them some good beverages, too.”

The sommelier’s work starts long before the first guest is seated. The first part is building an appropriate wine list to complement the menu, even those that change daily with seasonal offerings.

“You’re making sure that it’s not only filled with wines that are good and drinkable, but are unique and interesting,” Rosengren said. “There’s a lot of work behind the scenes that no one really thinks about. … I’ve got to make sure – especially for people who don’t know wine and just want something that tastes good – that I’ve already set myself up for success.”

Rosengren cautions that he takes a perhaps controversial position, as he doesn’t try to suss out what kind of flavors his guests prefer. His starting point is assessing the diner’s wine budget as tactfully as possible.

“It’s not just about overspending, it’s also about underselling,” he said. “You don’t want to offend someone who’s coming in and has the budget to spend a thousand dollars on a bottle of and you would only recommend bottles around 50 dollars. You try to get some sort of sense of what people are willing to spend.”

From there, Rosengren discusses their orders and gets a reference on what types of wines his guests like to drink. What they tell him isn’t always helpful, such as when diners say they like cabernets or pinot noirs, which are “polar opposites” in the wine world.

At that point, Rosengren subtly takes control, educating diners on different options – perhaps they’d like to try a lighter style red with a slightly higher acid level? Since he personally selected and tasted what fills the wine cellar, he easily can suggest a few bottles that meet that profile and budget.

“There’s an element of psychology to it to get people excited about something, even though [that wine] might not be exactly the kind of thing they’d go for at home,” he said. “For the most part, people feel like they’ve been part of the decision: that they’ve actually helped guide me and I’ve helped guide them.”

An arduous journey – with a lot of benefits

Representing his native Sweden, Rosengren had to display his wine expertise in a comprehensive written exam, providing wine service to a judges’ panel, and, finally, a blind taste test.

Earning the Best Sommelier title was the culmination of nearly a decade of competition. He dedicated years leading up to that last competition with a singular focus, reading everything he could find not just on wines but the thousands of grape varieties. He studied geography. He studied history.

“There’s more knowledge than you’ll ever be able to cram into your head,” Rosengren said. “Even in this niche field of food and wine.”

Most afternoons, he would visit a restaurant where his friends would challenge him to a blind tasting to help him refine his palette.

“It was a grueling couple of years,” he said.

In competition, the blind tasting presents complex wines that present their own challenges in identifying. If that isn’t stressful enough, imagine doing that under hot spotlights and in front of cameras.

“I doubt even the best tasters in the world are going to nail more than … maybe 50 percent,” he said. “It’s very humbling.”

And, yes, that competition helped him experience a later “aha” moment.

Four years ago, he toured the Jean Louis Chave vineyards in France’s Rhone Valley with the legendary winemaker and his father, also a legendary winemaker. After a hot afternoon, they sat in the cellar to drink a 1978 vintage, which he had tasted and enjoyed before but the wine was known to have suffered from poor shipping and storage conditions to this country.

“Having that wine, in the cellar, was probably the best I’ve ever had,” Rosengren said. 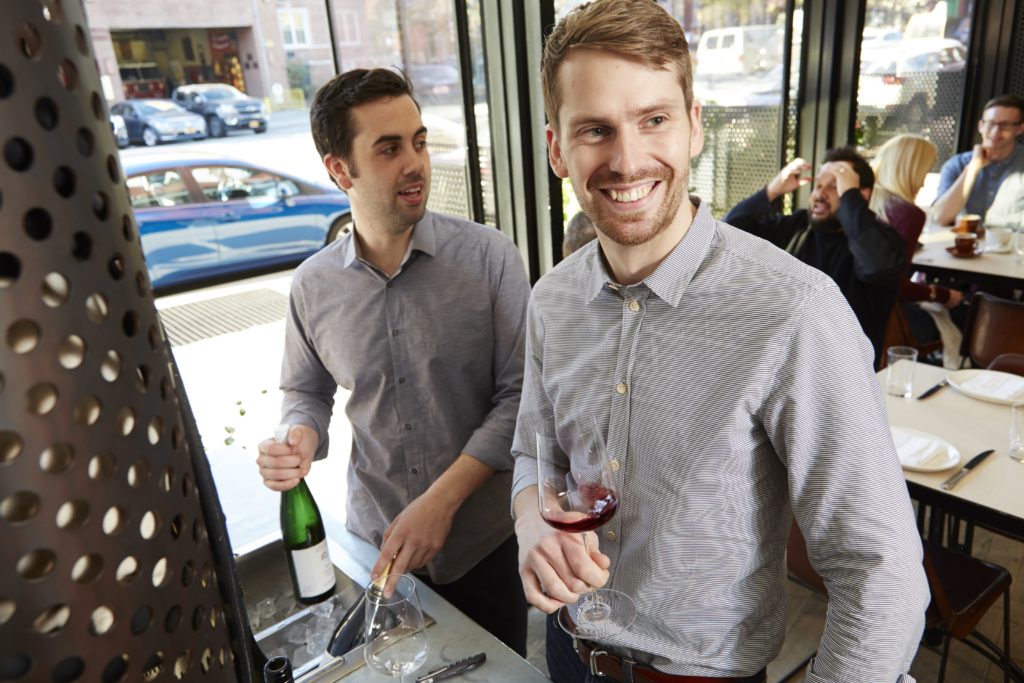 What a noted sommelier pulls from his cellar

Now that he’s stepped away from competition, Rosengren has the luxury of taking deep dives into what interests him. At the moment, he spends a lot of time on Bordeaux, Burgundy and Barolo vintages, as those align with the Italian-skewing menu at Legacy Records

Personally, he’s exploring new vintages coming out of Spain – and, to a lesser degree, Portugal – which are unlike anything the countries produced a decade earlier. He credits a young generation of winemakers, who are turning back the clock.

“These wines that are being made now are probably more in the vein of what sort of wines the current generation’s grandfathers and great-grandfathers were making a hundred of years ago, he said.”

These young winemakers are asking “What are these gnarly, 100-year old stunted vines that grow in my grandmother’s vineyard? So, the grapes are manyfold and differ from region to region.”

For years, these grapes probably were contributed to a local wine cooperative that produced bottles that sold for 2 euros. Now, they are properly being tended and set aside to produce singularly unique wines.

“That’s the crux of the whole movement now,” Rosengren said.

Wine trends he likes – and doesn’t

Much as the sommelier’s role has evolved in contemporary restaurants, so has the role of wine in today’s dining experience, which he calls the “democratization of wine.”

Diners and wine lovers can debate styles of wine, such as natural production, or how wine supports a restaurant’s quest to earn a Michelin star. But the mystique of wine slowly is fading away.

On the flip side, he does see that some of his peers want to remain the center of attention and make the wine discussion and selection a party. Some also want to put their stamps on their wine lists by including – and advocating – seductive, trendy vintages, which also enables them to tell a good story rather than serve a good wine.

“That can be a little off-putting to me,” he added, noting a need for seriousness and rigor in curating a wine list. “It’s a lot of [poor] wine being sold right now because it’s provocative or interesting or esoteric – and that can be too far.”

Perhaps a future in Swedish wine?

The right land and soil are essential in producing a quality wine, and the current climate in Sweden is not conducive to creating compelling vintages – but Rosengren points out some promising opportunities. Those start with recognizing the appropriate wines to produce in a country with an abbreviated growing season and harsh winters.

Rosengren has served on tasting panels aimed at enhancing both Swedish and Danish wine production. The Nordic countries could produce a good sparkling wine or Riesling-type wines that are high in acid with a touch of sugar, with growers investing in cold-resistant hybrids. Even with annual temperatures rising ever-so-slightly in Sweden, don’t expect to find a season that could support grapes ripening to the necessary point for a flashy, powerful red wine. He’d be interested in exploring a partnership in his native land to see what kind of wines could be possible.

“You’re not investing in wine to make a profit,” he said, noting an often 10-year journey from grape planting to the first bottling. “It’s going to take generations to get there, and the people who generally tend to make wines are people who already own the land or it’s a hobby project of some sort.”

In the meantime, he noted, “There’s a great beer scene.”