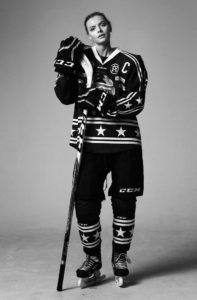 When you think about a stereotypical hockey player, missing teeth and bloodied faces may come to mind.

But what if we were to describe a particular hockey player as blonde and gorgeous and who happens to model on the side – would you believe us?

Linn Asplund, who has played ice hockey professionally for four seasons, currently plays for Stockholm’s reincarnated Hammarby Hockey club on its ladies’ squad. As a defender for the team, she finished the 2016/2017 season with three goals and 10 assists. She also served as the team’s captain according to Elite Prospects.

When she’s not hitting the ice and training with her Hammarby Dams, she’s hitting the set of her latest modeling gig. Looking at Asplund’s Instagram page, you can see her modeling for WTYE, a sports apparel brand in Sweden. She’s also rocked looks from Adidas Women’s Z.N.E. collection.

If you want to see Asplund put her modeling skills to the test, check her out in Avicii’s music video for “Fade Into Darkness.” Or, if you can catch her in person at one of her matches. The Hammarby Dams play their first friendly of the season on Sept. 25 verses Huddinge in Stockholm. You can also follow her on Tumblr, where she highlights both her personal and professional adventures.