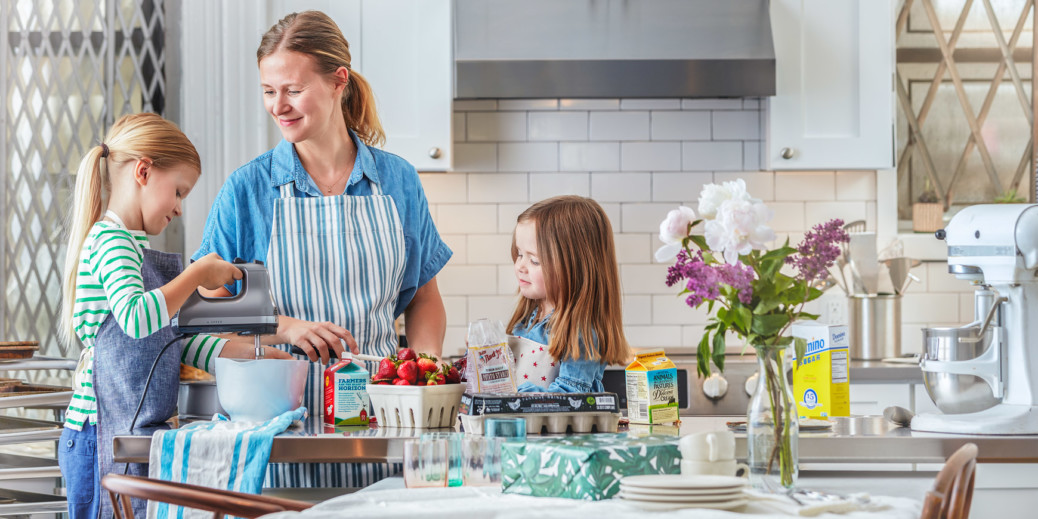 NEW YORK – When Ulrika Pettersson was little, she spent summers sitting on the back of Grandmother Rut’s bike, cruising through Östersund with freshly-baked cookies in tow – making the journey to share the sweet treats with her grandmother’s friends.

Winters, she remembers, were spent doing much of the same, but indoors. By the time Pettersson got home from school, it was a dark and cold, so she headed to the kitchen and baked.

Today, Pettersson, with the help of Grandmother Rut’s cookie recipes, is the woman behind Unna Bakery, a gourmet cookie bakery based in New York (the Swedish word Unna translates to indulge). We met up with her at the Swedish-American Chamber of Commerce, New York’s Gateway coworking space to chat about her background, the inspiration behind her cookies and what’s next for Unna Bakery.

From design to dessert

While Pettersson spent much of her childhood alongside her mother and grandmother baking, when it came time for schooling, she chose to pursue graphic design. And for several years, she worked as a designer, first in Hamburg, then in Stockholm with POC, an internationally-recognized sports gear company.

It took a big move across the pond to shake things up.

“[My husband and I] had our first kid, and we lived in a small apartment,” Petterson said. “So, it was time to make a move anyhow, but we were kind of done with Stockholm. We wanted to see something new. So, he got a job [in America], and I quit my job.”

Pettersson spent a year getting her growing family acclimated to their new life in the States, and then began doing freelance graphic design. But this time around, it wasn’t the same; she no longer enjoyed it.

For anyone feeling stuck in a career, we highly recommend what she did next.

“I just made a list of what I like to do – what brings joy to my life, and baking was one of them,” she said matter-of-factly. “I had a long list, but I saw the most opportunity in [baking].”

Pettersson contacted Hot Bread Kitchen, a Harlem-based culinary incubator, with her idea of a traditional Swedish cookie company. The idea was approved, and just like that, in 2015, Unna Bakery was born.

In the mid-18th century, women were not allowed in coffee shops, but because caffeine was just as important in the 1700s as it is today, women found a way to get their fix, and the gatherings became known as kaffereps. A kafferep was a rather exclusive coffee party in the comforts of a woman’s own home. The laciest tablecloth and matching napkins were used on  the table. The best china was brought out for serving. The who’s who of society was invited.

And that doesn’t even begin to cover the food, which is where the number seven comes in.

“There were a lot of elements involved because that was the design of the gathering,” Pettersson said. “But nothing could overshadow the cookies and the eatery.”

Atop the ornately set table were pastries, cookies and buns. And ringing true to Swedish lagom culture, anything less than seven treats was considered stingy, and anything more was overkill, almost bragging.

That was reason enough for Pettersson, who went to work developing her seven cookies.

The bakery’s best seller is the Raspberry Cave thumbprint cookie, but other popular offerings are the Coconut Oat and Lemon Lime. When using grandmother’s tried-and-true recipes, there are no wrong choices.

So many chefs and bakers seem to exude expertise, touting years of experience in the kitchen, catering events for hundreds of people. Yet every one of those Michelin-starred individuals walked into a kitchen for the first time at some point in their career.

And with Pettersson, it was no different.

“I’d never been to a bakery before, never used those huge machines and the ovens,” she said. “You know, other professional bakers are beside me, and I’m like [Pettersson makes a nervous sound], but it was fine, it went well.”

While it may have taken Pettersson a couple days to get the first-professional-kitchen jitters out, it did not take long for her to find success. Similar to her career-change brainstorm, she simply decided to approach her two favorite boutique food shops and ask the owners about carrying her cookies.

“Somehow, I convinced them to take the cookies in,” she said. “At the time, I said the shelf life was three weeks. I realize now that’s crazy. Nobody takes in cookies with a three-week shelf life. But I didn’t know that they had a much longer shelf life. I didn’t have time to test it so, I couldn’t say. But they took them in, and it started there.”

And it has certainly taken off since then. Unna Bakery cookies now are sold in over 200 stores (mostly in gourmet food stores) across the country, including certain Whole Foods and Dean & Deluca locations. All seven flavors of cookies can be purchased online and delivered right to your doorstep.

Pettersson’s next goal is to continue expanding into a larger chain.

When asked if she had plans to expand the product offering, her answer was simple.