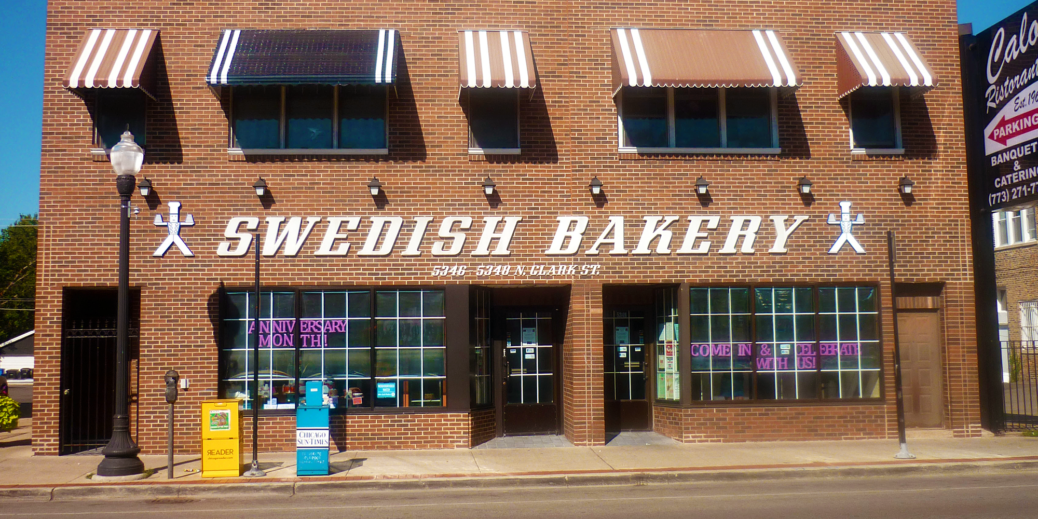 Reader Note: The Swedish Bakery has closed its doors since this article first published. To learn more about its closing, read our story update here.

Authentic and original, Swedish Bakery has been serving customers traditional Swedish and European baked goods since the late 1920s.
Today the menu has expanded to include a variety of treats from cakes and cookies for special occasions to breakfast items, bread rolls and a number of traditional Swedish pastries.

The bakery is located in Andersonville, a quaint and diverse neighborhood in Chicago and home to the Swedish American Museum. The neighborhood’s Swedish background dates to the 19th century when Swedish immigrant farmers settled there. More Swedes continued to move to Andersonville and began opening a number of shoe stores, delis, hardware stores and of course, bakeries.

These days, Swedish Bakery is one of the few bakeries of its kind in the United States where you can find traditional Swedish treats like Princess Cake and sweet rolls – some of its most popular items. Other best-sellers include the Andersonville coffee cake, a house specialty made from Cardamom dough with almond filling, cinnamon sugar and topped with almond and crystal sugar. Another favorite is the Princess Tort, a variation on the very popular Princess Cake made with whipped cream, covered in Marzipan and decorated with floral arrangements.

Because the traditional Swedish items on the menu are such a niche product, Swedish Bakery offers shipping to customers all over the country.

Swedish Bakery is just two blocks from the Swedish American Museum and partners with it and with other Swedish businesses from time to time.

“We’ll help supply large, decorative cakes and marzipan for bigger events at the museum and sell our bread to smaller businesses like Svea,” Williamson said. “Andersonville is a very Swedish neighborhood and a lot of businesses and members stay working together to preserve the history of our Swedish culture.”

History is a valuable concept to this Swedish business, and even the décor and aesthetic have a very old-world feel.

“It feels like you’re traveling back in time when you walk through the front door,” Williamson said.

Whether dropping in for a quick pick-up, ordering a giant cake for a Swedish-themed wedding or craving marzipan from hundreds of miles away, Swedish Bakery will satisfy your Swedish, sweet-treat needs.