Swede-up of the Month: iZettle

Swede-up of the Month: iZettle

Way back in 2011, iZettle co-founder and CEO Jacob de Geer was quoted as saying “Cash is a hassle. Whether you’re a merchant with a storefront, a plumber working in someone’s home, selling produce at the farmer’s market or settling the bar bill between friends; iZettle makes payments convenient.”

iZettle started as one of the first companies to have a credit card reader that attached to a smartphone for easy payment processing. It became a pioneer in what is known as the social payment industry and its vision truly has made it easy for anyone who wants to charge for something to do so painlessly.

Five years later, this Swedish tech finance giant is making life easier for hundreds of thousands of businesses all over the world. And iZettle is just getting started.

Now available in countries all over Latin America and Europe, iZettle has seen its revenues spike more than 80 percent from last year. It just announced it is starting to help small businesses in an even more important way than making it easy for customers to pay. 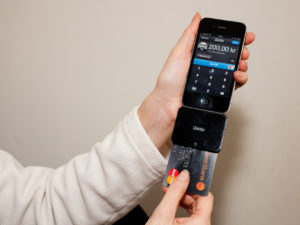 business growth.  Does your business need $50,000? Just ask iZettle, because now instead of going through complicated banking systems or dangerous personal loans, iZettle will loan your business the money it needs and just charge you more every time you receive a payment. No variable interest rates, no late fees, no monthly payments. Just a simple way to get money into your company at a flat rate.

iZettle is helping hundreds of thousands of businesses every day and making millions of transactions easier, all while growing at a staggering rate. Congrats to Jacob de Geer and his entire team at iZettle, which makes for a terrific Swede Up of the Month.