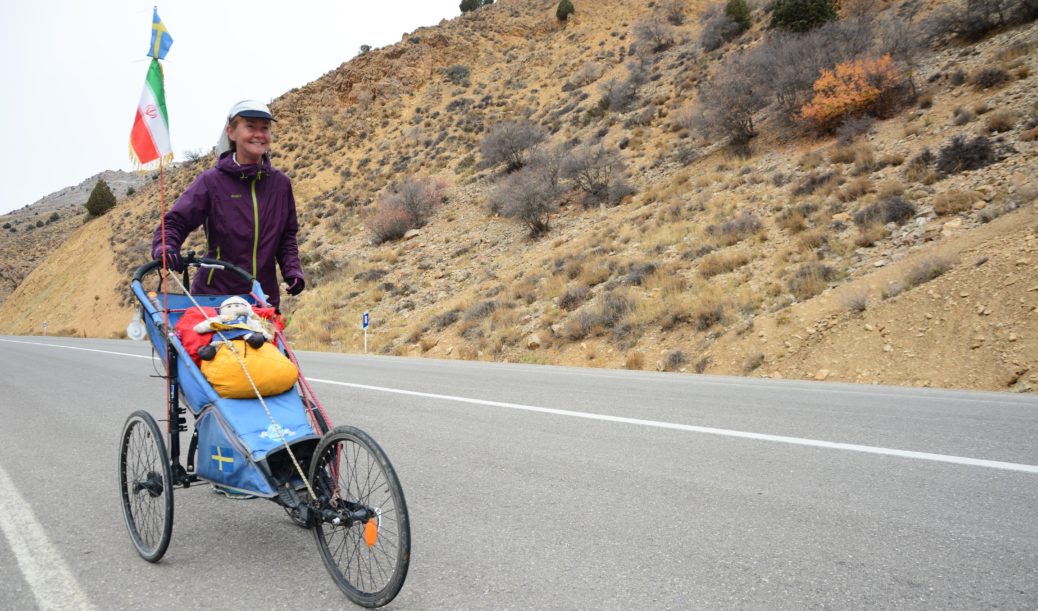 Less than 10 minutes into what would become a 58-day journey, Kristina Paltén was broken.

Here she was in Iran of all places, where the Swedish native chose to embark on a cross-country journey, a journey she hoped would challenge her prejudices of the world around her.

“After I ran my first kilometer, I sat down and cried because I felt so lonely,” Paltén said from her home in Stockholm.

Reality had hit. She couldn’t read the road signs. She had no one to talk to in the countryside near the Iranian/Turkish border. Loneliness had set in.

“Why am I here,” Paltén recalled thinking at the time. “What am I going to do? Am I the most stupid person in the world? I could be at home on the couch with my friends.

Paltén got up. And she started running.

“Everyone was so friendly, and it really turned quickly,” Paltén said. “This isn’t at all what I expected. This is much more than I would have thought.”

The thought of a long-distance journey by foot was nothing new to Paltén. She and her friend Carina Borén ran from Turkey to Finland (3,262 km) in 2013 before kayaking from Finland back home to Stockholm. Paltén, who started running when she was 31, estimates she ran about 6,000 kilometers that year. She also ran 201.3 kilometers (125 miles) in a 24-hour race.

“First of all, it means meditation,” Paltén said of her passion for running. “It’s just being present in what is right now and let go of all thoughts and everything. It also means beauty…I like to be a part of what’s going on in the nature all around me. Most of all, it’s relaxation.”

The thought of running across Iran alone was something different.

Paltén’s sister called her one evening before her trip asking how she and her family would be able to cope if something happened to Paltén. Two of Paltén’s close friends were angry with her, fearing for her safety.

But she was determined.

“In my mind, the world is getting more and more afraid,” Paltén said. “I would like to see more trust in the world, more curiosity in people who are different from us. Running through Iran was my way of showing trust.”

That first day – after the bout with loneliness – Paltén pushed her jogging stroller that held her supplies, including a tent and sleeping bag, along until she arrived at where she expected to camp. A man brought her food and wine. She went to a restaurant to use WiFi and upload pictures. Food and tea were placed in front of her. This stranger, or better yet, this guest, wasn’t allowed to pay.

Throughout Iran – a northern route near the Caspian Sea through Marshad and onto Turkmenistan planned with help from Iranian friend Amir Nazari – Paltén met people who welcomed her in. Despite a language barrier, she made friends, some of whom began calling her in the days after she departed their homes to check on her safety.

Paltén was running through a national park in the mountains when she met a woman standing on the side of the road. She invited Paltén into her home. Drinking water was kept in plastic containers on the porch, the bathroom was in the garden. The woman served Paltén a meal, giving her the biggest portion of food, and gave up her bedroom for Paltén to get some rest. At first, the woman wouldn’t accept Paltén’s offering of a large bag of pistachio nuts when it was time to leave.

“This is love, this is gratitude,” Paltén said. “It was such a beautiful moment. It felt like the world was just standing still.”

Among other highlights, she ran with a running club with a half dozen men that was used to running 5 to 10 kilometers a day, not the 35 they ran that day. A baker gave her bread and loaded down her jogging stroller with fruit.

She never used the tent.

Back home in Stockholm, Paltén runs her own business after having spent 18 years at Ericsson. She is working on a book that will chronicle her time in Iran. And she’s started a crowdfunding campaign to raise $8,000 to produce a documentary of her experience (a photographer was with her for eight days in Iran, and she also carried her own video camera).

Another adventure is possible, although it will have to wait until at least next year.

“I haven’t planned the next adventure,” Paltén said. “I need to be able to relax. It’s an adventure on its own running my own company. It’s another kind of adventure.”