Margareta Lidskog’s respect for the Sami culture goes hand in hand with the jewelry and gnomes sold by her company, SwedArt.

Honorary ambassador for the Arctic town of Arvidsjaur in Lapland, Sweden, Lidskog began working with artisans from Lapland 20 years ago. Sweden, as well as Norway and Finland, has been home to the indigenous, nomadic reindeer herding Sami people for 10,000 years.

“Today, less than 3,000 Sami have reindeer husbandry as their livelihood, and they now live in permanent homes, often in towns or villages,” Lidskog said. “They supervise and gather the animals with the help of ATVs, snowmobiles and even small helicopters for the early summer marking of calves and fall slaughter.” 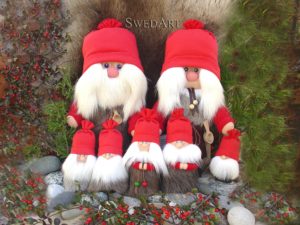 The Sami use the hides and antlers for clothing, shoes, art and craft items.

“Vegetable-tanned reindeer leather is known as one of the finest leathers in the world,” she said. “It has been tanned [preserved] with bark instead of with environmentally toxic chrome and is super soft and yet strong.”

When she started her Concord, Mass.-based company, Lidskog helped market handmade collector Sami style knives with reindeer antler bone handles and sheaths with hand-carved engravings. She also sold unique collectible Swedish gnomes with reindeer fur coats, handmade exclusively for SwedArt. The gnomes – she now has a collection that includes Santa and Mrs. Claus – are extremely popular with her customers.

“We have long waiting lists,” Lidskog said, adding that the gnomes are handmade by a 75-year-old schoolteacher in Lapland.

Today Lidskog focuses on handmade Sami reindeer leather bracelets, purses and necklaces as well as the gnomes. She began selling her jewelry line 12 years ago.

“It’s an art form I had always admired ever since growing up in northern Sweden,” she said. “At the time, this type of jewelry was not very well known outside of Scandinavia. Our SwedArt bracelets are made by a very small and experienced group of Swedish artisans and friends near the Arctic Circle.”

The buttons on the jewelry are made of hand-carved shed reindeer antler bone.

“The braids attached on top of the leather band are made with spun wires of pewter with 4 percent silver, made by a Sami friend of mine,” Lidskog said. “This type of spun wire was invented by the Sami hundreds of years ago. The wire is lead and nickel free.”

Since starting the line, she has received orders from all 50 states and 50 countries abroad. She currently sells 150 different styles of bracelets in many colors as well as 10 styles of necklaces.

“I basically started from my kitchen table in Concord, Mass.,” she said, noting her husband, Niklas, who is retired, works with her. “I could not do this without my husband, who helps me with shipping, bookkeeping, paying taxes and selling at shows. We fly with 300 pounds of luggage to events in other states. His help in growing the company has been invaluable.”

About 10 years ago, Lidskog started getting invited to exclusive celebrity gift lounges in Beverly Hills and Hollywood that cater to celebrities. SwedArt-owning celebs include everyone from singers Steven Tyler and Jennifer Nettles to actors Dennis Quaid and Angela Bassett. Miss America 2018 and Crown Princess Victoria of Sweden also own SwedArt creations.

After fans of British actor Benedict Cumberbatch discovered he was wearing a SwedArt bracelet as his good-luck bracelet, Lidskog received 2,000 orders from fans all over the globe.

“Cumberbatch responded to a letter I sent him where I explained how he has helped me share info about the Sami culture by wearing his bracelet,” Lidskog said. “I posted his personal and gracious response on my SwedArt Facebook page and it received 17,000 viewings in just a couple of days.”

Nine-time Grammy award-winning singer/songwriter Sheryl Crow owns a dozen SwedArt bracelets and “has worn them at concerts all over the world for years,” according to Lidskog.

She and her husband also sell at shows and festivals in eight states, including Norsk Høstfest, held annually in the fall in Minot, N.D.

SwedArt is known for its customer service, fast shipping, quick email response and willingness to make custom bracelets in any size, color or style.

“There are no questions asked for returns or exchanges; that has been SwedArt’s modus operandi,” Lidskog says. “SwedArt customers around the world wear bracelets made near the Arctic Circle in Sweden, and I am extremely proud of having had an opportunity to share this art form and its background history.”