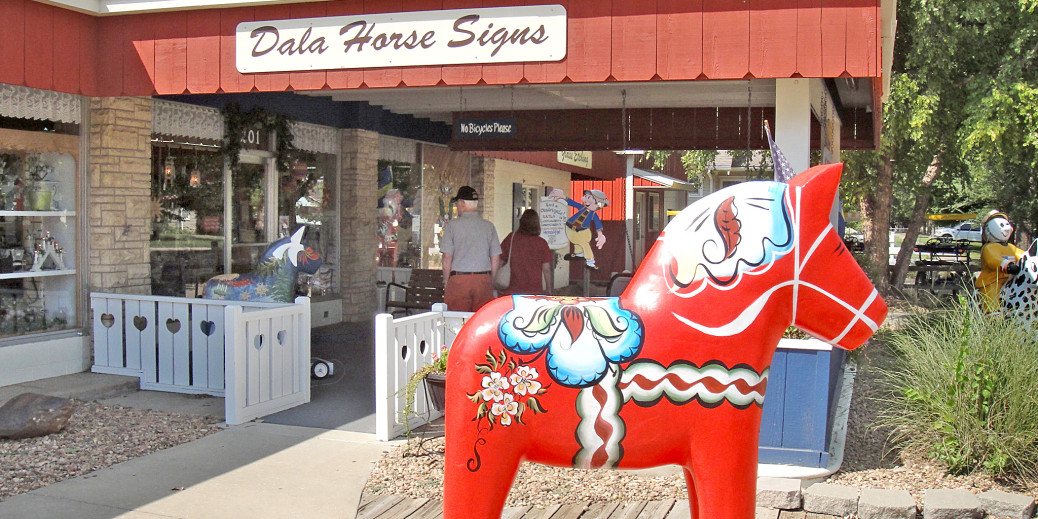 The century-long mass migration that brought some 1.3 million Swedes to the United States beginning in the mid-1800s left indelible marks all over America. While many Swedish immigrants made comfortable livings in urban pockets – in places like Worcester, Mass., New York City and Seattle – the vast majority sought out farmland in the Upper Midwest where conditions resembled the climate and topography of home. The first waves of settlers encouraged those who followed, and over time, major population centers of Swedes sprang up across the country. By 1910, there were more Swedes living in Chicago – 100,000 of them – than in any city in the world, excluding Stockholm.

Let’s get to know Svenskamerika, as the nation’s Swedish-American community came to be known. First up is Lindsborg, Kansas, which wears its nickname “Little Sweden USA” proudly, prominently and you could say, equinely.

Drive about an hour north from Wichita on Interstate 135 and, like Dorothy, you may not think you’re in Kansas anymore. Welcome to Lindsborg, or as the locals have dubbed it, “Little Sweden USA.”

Stroll around town, and you’ll find that the community of about 3,400 people lives up to its name. A fixture on Main Street is the Swedish Crown restaurant, which has been slathering burgers, chicken sandwiches and potato sausages in its lingonberry BBQ sauce for more than 40 years.

Just up the block is Anderson Butik, a shop that promises shoppers “that true Swedish feeling,” which no doubt can be acquired by stocking up on its Swedish style potato sausage, Saturnus Glögg Mix, Swedish flag toothpicks or even “Lutefisk Will Make You Stronger” T-shirts.

A page out of classic Swedish architecture is close by. The Swedish Timber Cottage (Den Svenska Timmerstugan) is a traditional Swedish cottage designed and prebuilt near Lake Siljan, Sweden and reassembled on North Second Street in 1983.

Wander a half dozen blocks farther south, and right before you come to the Smoky Hill River is the McPherson County Old Mill Museum. Among its many historic treasures – many of which chronicle the lives of early Swedish settlers – is the 1904 Swedish Pavilion. Designed by Ferdinand Boberg, one of Sweden’s foremost turn-of-the-century architects, the actual structure was built for the 1904 World’s Fair in St. Louis and lovingly restored for Lindsborg’s visitors. It is the only example of Boberg’s work anywhere in the United States.

Swedish heritage also is imbued within Bethany College, founded in 1889 by Swedish-Lutheran settlers. Bethany’s blue-and-yellow-adorned teams compete as the Swedes; the campus bookstore is known as the Swede Nation Station; and the college hosts an annual visiting professor from Sweden.

While Swedish life is evident year-round in Lindsborg, it is celebrated with authentic Swedish zeal every other October during the town’s Svensk Hyllningsfest (Swedish Honoring Festival).  The day-long festival dates to 1941, and many of the traditions of that first year remain today – a parade featuring genuine Swedish clothing, folk dances and performances and plenty of food. Today’s festivals also include Kubb matches, traditional dances performed by hundreds of children and adults alike, puppet shows and magicians, movies and musicians, even a genealogy booth. Little wonder why the townsfolk need a breather every other year.  (Mark your calendars for Oct. 13, 2017.)

In the meantime, visitors can seek out what is perhaps the town’s signature Swedish symbol – the Dala horse, a wooden, tail-less, stubby horse first whittled in the 1800s by Swedish loggers and miners during long cold Swedish nights. The red-coated variety of the Dala (pronounced daw-la) has been adopted as Lindborg’s official welcome symbol and community icon, and you’ll find a herd of “wild” Dala horses standing festively decorated all around town. Much like their farmyard kin, the cows on Chicago’s Michigan Avenue, the 4-foot-high, fiberglass versions each come saddled with their own take on the pop art tradition and have been known to inspire song and humor. And they’ve been named one of the 8 Wonders of Kansas Customs.

There’s an air of whimsy around the Wild Dalas, with each given a name that would make the most patient punster groan. Consider artist Kathy Peterson’s “Fala the Dala Brick Road.” To find all 30 of the Wild Dala Herd, grab a map. You might just need it to remind yourself that you really are still in Kansas.