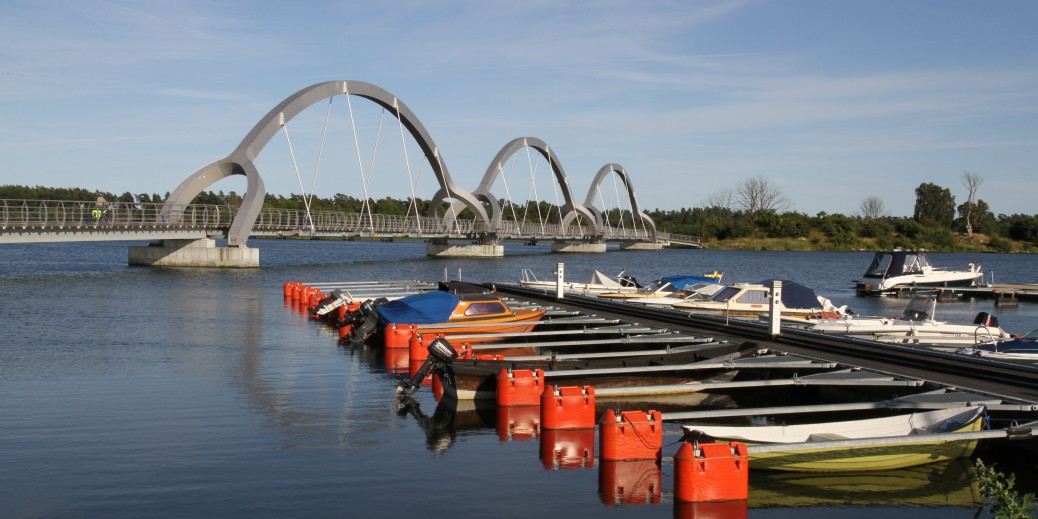 You could say that for most of its nine centuries, the town of Sölvesborg has kept out of the limelight, or other kinds of light for that matter.

Sure, it gets its share of attention here and there.

There is St. Nicholas, the Brick Gothic church that dates to the 12th century, around which the village grew. On the twin hills of Kanehall and Vitehall, you’ll find one of Europe’s largest beech tree forests, not to mention a perched vista of Hano Bay to the south of town, at least until the leaves get so lush to block your view. Near the center of town are the nude statues of Ask and Embla (the Adam and Eve of Norse mythology) who stand immodestly not far from the train station, sure to raise an eyebrow now and again.  And not too far from Sölvesborg, the town of Krokås has its annual Ålafiskets dag, a day of eel fishing each July.

Ah, the eels. This cultural connection with the snakelike fish could explain the ubiquitous Sölvesborg flag festooned around town. The quadrant of four blue “s”-shaped eels on a yellow background has slithered its way to iconic stature in this corner of southeast Sweden.

Since 2012, the imagery of the eel has exploded in vivid colors across the coastal landscape in a way that has really put the hamlet on the map.

The Sölvesborg Bridge, a four-year-old span that is the longest pedestrian and bicycle bridge in Europe, is today among the most celebrated on the continent – CNN.com included it among 11 new bridges that break the mold in an April piece.  At 2,480 feet, the bridge forges its way across Sölvesborg Bay, connecting one part of town with a new housing development.

The focus of the bridge centers on three dominant arches, swooping in a row as if three giant eels were leaping their way in perfect symmetry across the bay. Fabricated from more than 150 tons of stainless steel, the bridge has captured the public’s imagination perhaps less from the shape of the structure itself and more for the way that colorful lights have been incorporated into its design. The design firm of Ljasarkitektur incorporated 24 different LED lights, illuminating the distinctive arches and bouncing subtle hues down the supporting cables into the water below.

The varying colors, preprogrammed for different seasons and events throughout the year, were inspired by the region’s coastal bird life, although these days, it’s fair to guess that the bridge itself attracts more attention than does local avian life.

For a population that enjoys staying active, cycling and walking under the soaring blue, violet and yellow eel-like arches are making 21st-century nights in Sölvesborg even more memorable than any of its long history of days.