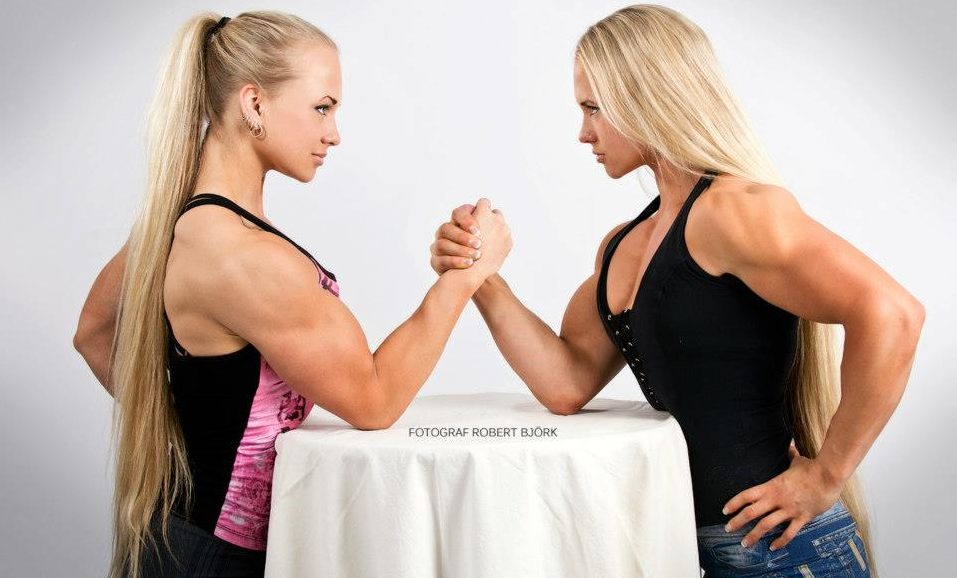 There was a time when realtor Sarah Rotunda used her strength to punish her competition.

She’d overpower them with her powerful arms. She’d tackle or push them away, keeping them from getting past her. And occasionally, she’d pick them up and slam them to the ground.

It was all in a day’s work.

These days, Rotunda is much more relaxed.

As she shows clients a home, most have no idea that her days of being one of the best arm wrestlers in the world are behind her. They don’t recognize her from her days on the Swedish version of “American Gladiators.” And they don’t know that she spent six months as a professional wrestler.

“No, my clients don’t know my background, and that’s cool because I want people to pick me as their agent because of my real estate services and expertise,” Rotunda said. “Someone found out once the day before closing, and he brought his entire family to the closing instead of just his wife because he was amazed, so that was funny.”

Rotunda, the wife of WWE superstar Taylor Rotunda (who wrestles as Bo Dallas), is a superstar in her own right.

Born and raised in Stockholm, Rotunda (whose maiden name is Sarah Bäckman) is an eight-time World Champion in arm wrestling, winning four titles with her right arm and four with her left. That success led her to TV, where she appeared as “Spirit” on Gladiatorerna (Gladiators), and to WWE, where she spent six months in the wrestling powerhouse’s developmental division NXT. She also boasts more than 580,000 likes on her Sarah Bäckman Facebook page and nearly 34,000 on Instagram.

When she was 14 and in the eighth grade, Rotunda often was the target of bullying.

“I grew up and was overweight most of my life up to that point,” she said. “Not having many friends, some people were mean to me.”

That year, her school held an arm wrestling competition, and a cafeteria worker encouraged Rotunda to try it. She ended up beating everyone in the school – the girls, the boys, the teachers.

“I was blown away,” said the 24-year-old. “People stopped being mean.”

She then started visiting an arm wrestling club in Stockholm and “fell head over heels in love with the sport right then and there.”

What happened from there is nothing short of extraordinary.

Three months after getting started in the sport, she traveled an hour west to Eskilstuna to compete for the first time.

“I was scared to death because I had never competed anywhere before,” Rotunda remembered. “I had no expectations.”

Two months later, she competed at the Swedish Nationals. She won again.

Rotunda didn’t attend the World Championships that year – she was young and short on money and sponsors. But she knew competing in arm wrestling was something she wanted to do.

After winning another Swedish title in 2007, she captured her first world championship. She had a decision to make.

“Will I become a world champion by going to school or going to the gym?” she thought at the time.

The rising star skipped two years of high school (she later crammed in a ton of work the last month before graduation to earn her diploma) to focus on arm wrestling.

“My parents weren’t happy,” Rotunda said. “I was so firm in believing what I was doing was the right thing to do.”

Rotunda lived in the gym, or practicing with other pullers (arm wrestlers) on the table. Workouts regularly consisted of three sessions a day, switching from an hour of cardio in the morning to two hours of weights in the middle of the day and two more in the evening. Legs, chest, shoulders, back – and obviously arms – she strengthened everything.

The overweight teen transformed herself into one of the best women arm wrestlers ever.

She juggled several jobs to help pay the bills while training – stints at a supermarket, fitness store, waiting tables and working at McDonald’s. She’d also appear at arm wrestling events, where she’d often be challenged by and then defeat the guys. She’d also make money by attending bachelor parties and arm wrestle all the guys who were brave enough.

Rotunda felt it was important to promote the sport, showing that women could be “complete ladies” and still be really strong. She traveled to Japan five times in 2011 and 2012 to appear on a game show where she would arm wrestle celebrities ranging from actors and singers to TV hosts and even a sumo wrestler. She “took a good hit” to her shoulder against the sumo wrestler and had to rehab it for a year.

The Swedish version of “American Gladiators” invited her for a tryout, and she became the character “Spirit” for the 2013 season. While it was fun, it was a challenge. Train and eat, eat and train is the way she described the two months of heavy preparation for the season.

“I just thought it was cool,” she said. “You got to be a character and compete.”

Her run on the show was short-lived for a good reason: the WWE hired her.

“This is something I haven’t thought about for so long,” Rotunda said of starting a career in wrestling. “It was very difficult. Of course, it was very exciting.

“I thought I was done with arm wrestling. I was excited to start something new and always wanted to live in America. It just got to be a blessing that the WWE hired me.”

Rotunda was sent to NXT in Florida to learn the art and perfect her craft. Five to six hours of wrestling each day awaited her.

“It was a big shock to me when I did realize how freaking tough it was,” she said. “I tried to learn to like it, but I never really fell in love.”

With the sport, that is.

Something bigger came out of her wrestling experience.

“Yes, I met my husband, the love of my life, my soulmate there,” Rotunda said. “It was love at first sight.”

Taylor Rotunda comes from a wrestling family: His grandfather is WWE Hall of Famer Blackjack Mulligan, who passed away in April; his father is Mike Rotunda, known as Irwin R. Schyster (IRS); his brother is Windham Rotunda (Bray Wyatt); his uncles are Barry and Kendall Windham.

Like most wrestlers, he’s constantly touring and promoting. He returns home to Florida a couple days each week.

“I am his biggest fan,” Rotunda said. “I am very, very supportive. He’s the hardest working man I’ve ever met in my life.”

It was through her husband that Rotunda found her career in real estate.

Her mother-in-law Stephanie Rotunda, whom she calls her best friend, introduced her to the industry a year ago. Whereas arm wrestling came easy, real estate took some time for Rotunda to perfect.

“I get a lot of clients because I’m from Sweden,” she said. “Many European sellers and buyers contact me because of that connection, and that feels awesome because believe it or not, we ‘understand’ each other and connect simply because we are from a certain part of the world.”

Or maybe, just maybe, they know a little something about the teenage girl who found fame was inside of her all along.