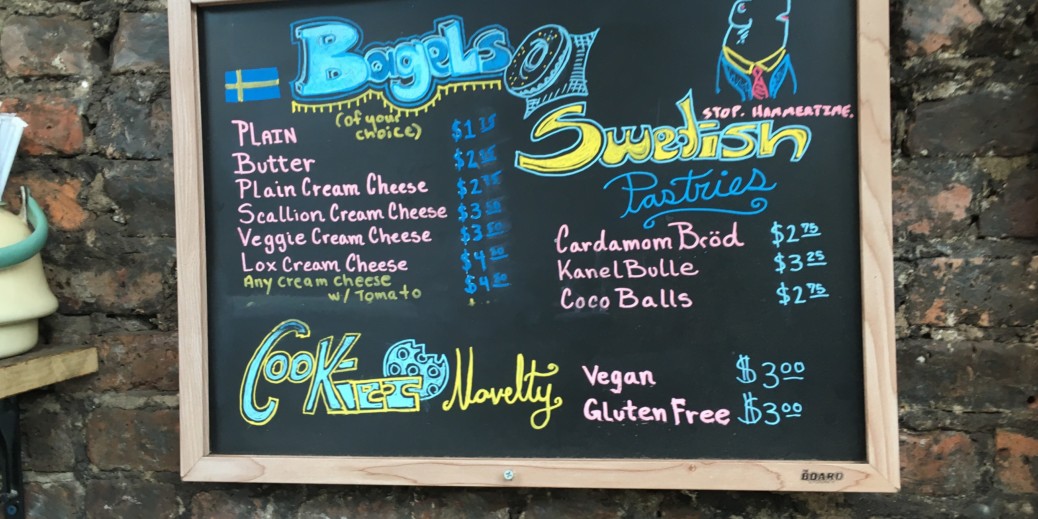 NEW YORK – While in New York, we had the chance to slip by Konditori, a Swedish-inspired coffeehouse that started in Brooklyn in 2010.

According to its website, Konditori is a traditional Swedish gathering place to enjoy warm drinks, fine baked goods and confections. It also is where one goes to fika, which we at Umgås clearly enjoy.

What initially caught our eye was the news that Konditori was expanding outside New York City, where it boasts seven locations, into Philadelphia, where it plans on opening two locations.

We took a quick visit to the brand’s Williamsburg location in Brooklyn and found a small, cozy and comfortable place to pick up a coffee and sweet treats. The menu features a variety of coffees, including an iced coffee cold-brewed for 24 hours, teas and treats. Among the treats are Cardamom Bröd (coffee bread with almond filling), Kanelbulle (cinnamon rolls), bagels, muffins and pastries.

We sampled a lot of carbs: the delicious Candamom Bröd and a warm wheat bagel with scallion cream cheese. The coffee was strong and caffeinated. Had waistlines not been a consideration, we might’ve indulged in the Kanelbulle and Coco Balls, too.

Konditori is the brainchild of Swede Per Inglander and Ronny Kaj, who is from Brooklyn. We’re excited to see what’s next after Philly for the pair.