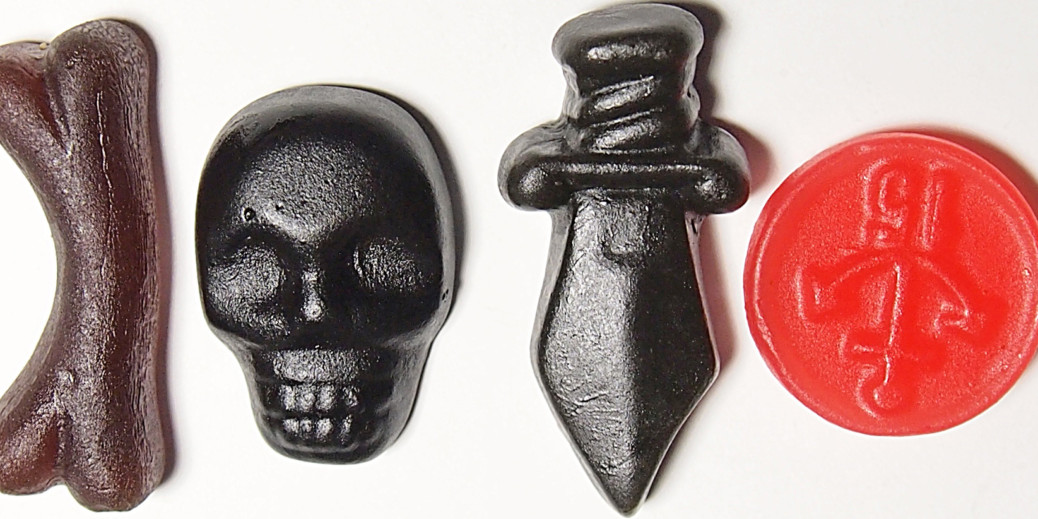 Most of it was unique and delicious, but some of it [read: every single piece of licorice] really did not sit well with our naïve American palettes. We liken it to being 5 years old and taking a huge gulp of grandma’s apple juice, only to find out it was lukewarm beer.

To help us wrap our mind around the concept of salty licorice, we spoke with Jukka Annala, the president of the Finnish Salty Licorice Association. And yes, that’s a thing.

Can you tell us about the history of salty licorice?

First of all, the distinctive ingredient of the salty licorice is ammonium chloride (NH4Cl, the salt). The salty licorice candy originates from medical purposes. Ammonium chloride makes the resilient mucus of the bronchus runny and easier to cough away. The NH4Cl and licorice combined have traditionally been used in cough medicines, at least in the Nordic countries and in the Netherlands, and these countries are the heartland of salty licorice in our universe even today. Elsewhere, people do not usually understand the deliciousness at all.

The pharmacists (apotek in Swedish) in Scandinavia used to sell salty licorice in the forms of liquid cough mixture, powder and pastilles. In the backrooms of the pharmacists’ stores they had a sort of miniature manufacturing process in order to make pastilles for the people who started to enjoy the taste besides the medicine usage.

Cumulatively in the 20th century, candy factories of the Nordic states and Holland started to make salmiak candies to fill the public demand. And this has continued to today: New brands enter, and the old classics keep blooming.

Each year, the association gives out the Salmiakki Finlandia Award for the best salty licorice sweet. How do you determine the winner?

The members of our conclave (8 people) keep their eyes open through the year,  for any interesting newcomer candies to appear in shops and kiosks. We also attend annual the Licorice Festivals in Stockholm and Helsinki, in which we check to see what’s goody good. Plus, we have eager informants, salmiakki fans and these days many factories themselves tend to contact us of their new products, too.

By the end of the year we have a conclave meeting in which we go through the candidates we have gathered. We analyze the candy taste, texture, dramaturgy, product name, package looks and opening procedures – all kinds of aspects. And we fight a little, bribe each other, do some voting, but after that usually nominate six candies.

In addition, we contact famous Finnish people to see if they are fans of salmiakki and are interested in attending our award jury. Usually we have a two-member jury of salmiakki lovers – domestic actors, writers, musicians – who make the final choice. The conclave gives the jury the power to make an independent decision and pick one of the six nominees they enjoy the most. The jury tastes all nominees and picks the best candy of their opinion before a live audience at our annual Salmiakki Gala in Helsinki (March 4, 2017). Even we, the organizers, do not know the jury’s decision before they announce it. It is always a night of maximum excitement. At the event, we have an all-salmiakki buffet with possibly 100 kilograms of salty licorice, and the bartenders can mix salmiakki vodka shots of the particular candies.

How long has the award been around?

From the very beginning – the association and the annual award have existed since 1997. Despite the title Salmiakki Finlandia, it has become an international award. The most enjoyable candy can be Finnish, Swedish, Danish, Icelandic, Norwegian, Dutch, German … even from New Zealand, if they suddenly begin to manufacture the best salty liquorice in the world, let’s say in Wellington. It is highly improbable, but never say never.

Have you had any Swedish winners in the past?

Yes, in fact many times. The Swedes are delightfully innovative and market-oriented with salty licorice products. Even the winner of 2016 is from Sweden: the ever-loving Super Salty Salmiakkola by Gammelstads from the Northernish town of Luleå, Sweden. It is the strongest salmiak toffee/fudge in the whole business, handmade by the smallest candy factory in Sweden.

We sampled some salty licorice, but it did not bode well with our American palettes. What’s the big draw? Why do Scandinavian folks enjoy it so much?

Check out what I mentioned about the pharmacists’ medicine tradition, even though it is not an exhaustive explanation. But it explains at least something of the candy tradition near-history of the Nordic. These days, we are socialized with the food culture that has evolved in the past.

However, we should bear in mind, not all Finns or Swedes like salmiakki. And one can still try to be friends with them who dislike it.

How would you recommend getting a non-salty licorice-loving American palette warmed up to the idea of salty licorice?

Try the normal sweet or mildly salty licorice first. [If you don’t like it], do not proceed to the extra salty stage. You see, the salty licorice is supposed to make your body react with a lovable scariness.

What is your all-time favorite salty sweet?

There are too many – it depends on the weather. Strong salmiak powder for non-stormy days, elastic softies for TV melodrama nights, hard-boiled variants against the horrors of Tuesday afternoon.

Last but not least, how does one become the president of the Finnish Salty Licorice Association?

In general, one has to be a decent person. Listen to a lot of Barry Manilow records. Stop and smell the roses. Go to sauna twice a week, minimum.