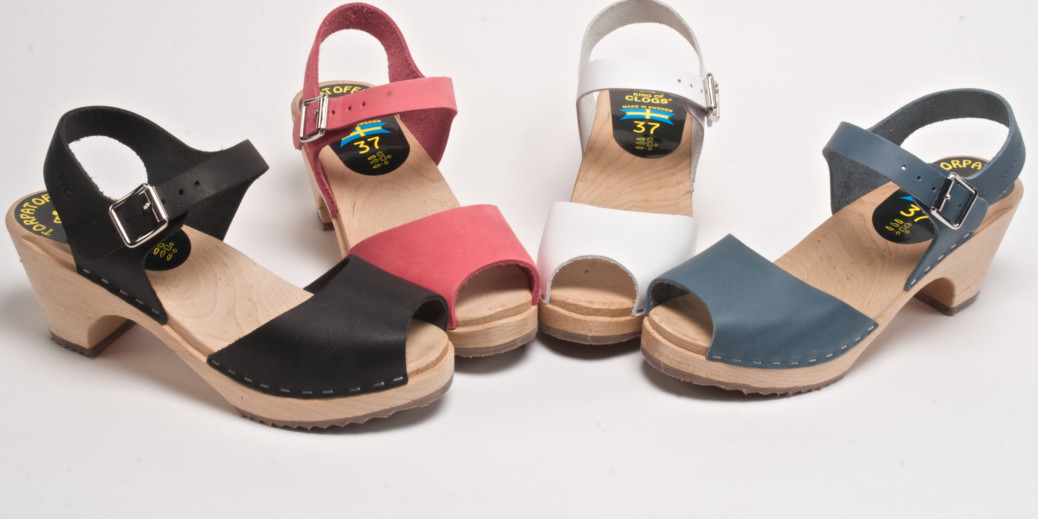 Most of us don’t really think about the work that goes into making footwear, but for the Swedes, making clogs is a craft that gets passed down from generation to generation. We’ve scoured the globe, well the Internet, for some of the best Swedish clogs. Here are some of our favorites. “Swedish comfort made in America” is the tagline for Clogmaster. Founded and developed by Swedish-born Cecilia Tidlund (who sold the business in 2015), Clogmaster puts form, function and overall well-being over fashion. Cecilia’s product model isn’t one-size-fits-all. Clogmaster has its own sizing system created exclusively for the company by Sven Clogs, and shoes are handcrafted here in the states. Clog lovers can create their own clog from the sole up – picking out a wooden base color, a variety of colors of leather and incorporate a choice of accessories, like straps or braids.

We’ve previously covered Lotta’s footwear, but we just can’t get over these super stylish digs! Lotta From Stockholm got its start about nine years ago, when owner Lotta Soderholm bought a pair of clogs while on a trip to her hometown in Sweden. After friends in London noticed Soderholm’s new “old” shoe, they asked her to bring back pairs for them. Fast forward a handful of years, and Lotta From Stockholm is shipping clogs – as well as boots, rugs, blankets and accessories – worldwide. Within the past two years, its products have expanded into about 30 storefronts worldwide. High heels, low heels, workwear, menswear – Lotta’s has its bases covered.

If you’re looking for something a little more unique – think painted, ribbons, bells and whistles (well, not quite, but you get the gist) – then Dala Clogs are for you. This store is based in Oxberg, Dalarnas Län, so it’s primarily a Swedish-language experience, but there is an English version of its website, offering products sold in U.S. currency. Like other clog makers, Dala Clogs also offers the custom shoe experience, but from the ornate details of their bakanna model with kurbitspainting to its more girly Rosanna model – you have a variety of options without paying the extra dollars of a custom piece.

Offering a variety of colors and styles for both men and women, Sandgrens Clogs is a family operation, where the craftsmanship of clog making was passed down from its founder, Sven Carlsson, to his son, Christer – who is the company’s current clog master. Rooted in the tradition of clog making, the company prides itself in maintaining the tradition of the Swedish clog while making it appealing and versatile enough for the modern world. Based in Påryd, Sweden, Sandgrens sells products using U.S. sizing and will ship to the States.

There are so many plays on words with this one, we’re head over heels! Cape Clogs is a retailer/distributor for a Sweden-based manufacturer, and its headquarters – if you couldn’t guess – is on Cape Cod (Bourne, Mass.). Its tagline is “body.mind.sole.” and it shows in the quality of products it sells. Cape Clogs sells the more traditional clog, but it also has a modern take – and one of the higher clog heels we’ve seen! Cape Clogs also are sold in one brick and mortar location on Cape Cod and in 20-plus other retailers across the United States. Swedish Hasbeens are the reincarnation of Swedish clogs of the 1970s. The brand launched in 2006 in Stockholm, introducing a new generation to this quirky footwear. It worked: Swedish Hasbeens was chosen as the country’s trend of the year only two years later, being worn by Sarah Jessica Parker, the actress who brought Carrie to life in “Sex and the City.”