The Restaurant with Goats on the Roof 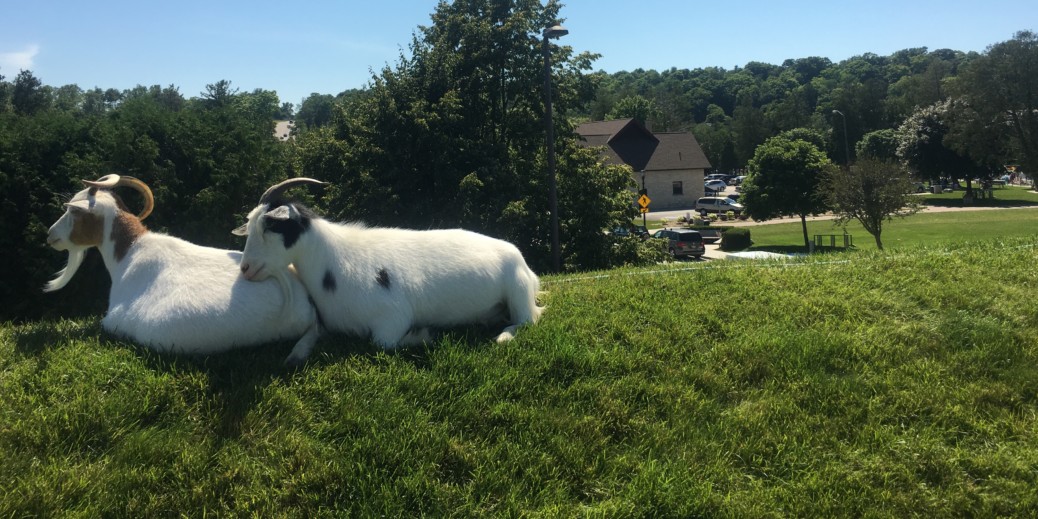 The Restaurant with Goats on the Roof

It’s not very often you see livestock outside of its environment; it’s even less frequent to see them grazing on top of a building covered in grassy sod. For Door County residents in Wisconsin, it’s likely they have found themselves giving directions to the restaurant with the goats on top of it, which happens to be Al Johnson’s Swedish Restaurant and Butik.

Al Johnson’s is a Sister Bay favorite and tourist destination alike. With its humble roots dating 60 years, it all began with Al – who converted an old grocery space into a restaurant, where he served as the head cook and washer. His daughter Annika told Door County Today there were times when the restaurant would be so slow, her father would put up a “Gone Fishin’” sign and leave it up to the patrons to follow the honor system and leave money in a jar.

It wasn’t until Al met his future wife, Ingert, that the restaurant embraced it’s Scandinavian heritage from its interior look to adding a butik for people to pass the time while they wait for a table (à la Cracker Barrel, although they didn’t open their first location until 1969). Soon thereafter, a guy named Dean Madden suggested Al build a restaurant with wooden log siding and a sod roof.

Door County Magazine details the endeavor that followed, but in short, the duo traveled to Norway and they met Knut Stenerud, who helped design the restaurant today’s patrons are familiar with. Stenerud and his carpentry team began the building process in Norway, but they disassembled, shipped and reassembled the restaurant around the original infrastructure to allow the business to operate even under construction.

Since its renovation, not much has changed. Tables and wood paneling is the same as the Johnson kids (Lars, Rolf and Annika) remember it. Some of the recipes on their menu were passed down from their grandparents – items with a Swedish twist are marked with a flag on their menu  – but the menu also features some local, American classics.

When asked about his fondest memory at the restaurant, Rolf recalls, “Helping my Farmor (grandmother) hand roll Swedish meatballs on the back prep table.” As for his siblings, Lars and Annika think back to the construction of the restaurant, and Al raising the flag of Sweden upon completion.

If you’re there for breakfast, the Swedish Pancake is a must (according to Kit Bütz, they dished up roughly 112,000 orders last year), served with a choice of protein (including Swedish meatballs) and the house syrup and Lingonberries on the side. The pancakes are rectangular and paper-thin – leave it to Grandma Johnson to suggest this, keeping things fast and efficient in the kitchen. For more savory appetites, Scandinavian staples like pickled herring and pytt I panna are among your options. You also can add sides to your dishes like pickled cabbage, cucumber salad and pickled beets.

If you can’t make it to Wisconsin, you can get all of your favorite Scandinavian and Al Johnson’s branded merchandise in the restaurant’s online store, including its house pancake mix.

And let’s all take a second to thank Harold “Winky” Larson, because if it wasn’t for him – we may not have one of Al Johnson’s greatest gifts to Sister Bay (and the world) – the goats.

When the weather is warmer, the goats (a.k.a. Lingonberry, Little Lingonberry, Snowball, Big Boy, Buckshot, Caramel and Inky, among others) make the three-quarter mile trek down from the farm to the restaurant, where they trot up to the sod roof where they bask in the sun all day. If you can’t make it there in person, you can keep an eye on the goats on Al Johnson’s Goat Cam (they’ll only be out on the roof from May to October; otherwise, they’re avoiding the Wisconsin winter weather in the barn).

Al Johnson’s is a labor of love that continues to stay in the family. Since Al’s passing in 2010, Ingert and her children have been very active in the business.