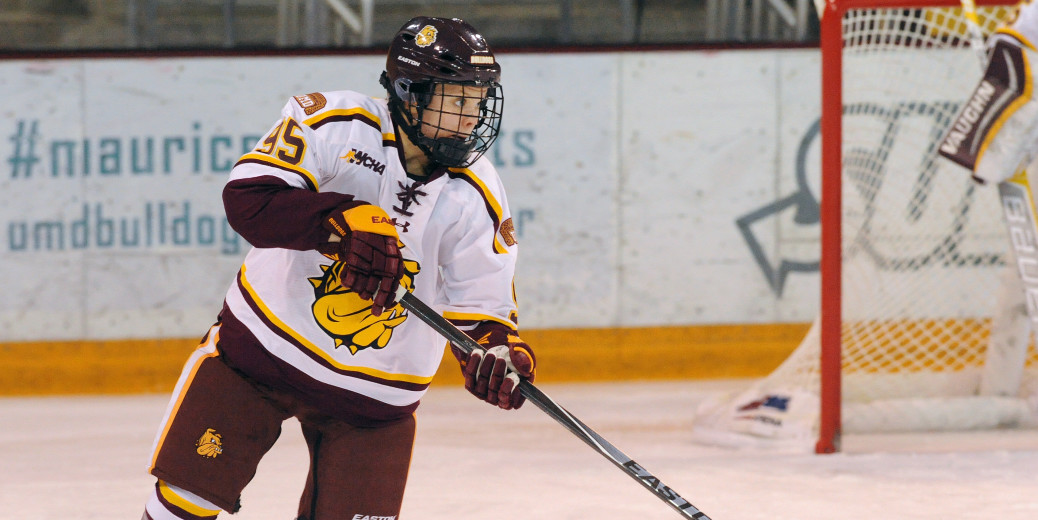 Sweden offers some of the best hockey in the world.

For some, however, the opportunity to play hockey in the United States – and attend an American university at the same time – is a dream come true.

Linnea Hedin just finished her sophomore season on the women’s hockey team at the University of Minnesota Duluth (UMD), where her teammates include fellow Swedes Maria Lindh and Michelle Lowenhielm. The trio knew each other growing up and are among an influx of Swedish student-athletes, including Caroline Markström of St. Cloud University, studying and playing hockey in the United States.

On the men’s side, players like Jakob Forsbacka Karlsson and Osker Andren, both of Boston University, Niklas Folin (UMass Lowell), Leon Bristedt (Minnesota) and William Lagesson (Massachusetts) are playing for top programs.

Hedin, who plays defense for the Bulldogs, took time away from her studies and the ice to share her American experience.

How long have you been playing hockey?

I have been playing hockey since I was 5 years old.

When did you start thinking about attending an American university to study and play hockey?

When I got to play with and against some players that had been playing and studying in an American university; I was probably around 13 or 14 years old.

Why did you decide to come to the United States?

To play hockey in the U.S. has always been my dream. [The] U.S. and Canada are the top teams in the world, and I think the best way to develop and experience hockey at its best is to be here and play with and against the most talented players in the world.

Did you and teammates Maria Lindh and Michelle Lowenhielm know each other growing up? Did you play on the same team?

I basically knew both Michelle and Maria growing up. Michelle and I both played with boys in the same age as us but on different teams, so we ended up playing against each other when we were young. But I did not get to know her until we started to play on the U18 national team together. Me and Michelle ended up at the same high school and in the same class both studying economics and law, we also played in the same club team AIK.

Maria and I had been friends when we were young. When I switched from boys hockey to girls/women’s hockey, me and Maria played together on a team called Segeltorps IF. We turned out to get along very well and became good friends. Then she decided to move up north to play hockey and go to high school and then we played against each other in the league Riksserien. We also played some tournaments together in the U18 national team and also some tournaments in the senior national team.

Did it help knowing someone else who was planning to go to school in the U.S.?

Of course, since me and Michelle were studying together, we also did the appointments from TOEFL and ACT together and helped each other with the process of getting to the U.S.

Did your coach in Sweden have a role? Did you know of any other players (men or women) who had come to college in the U.S.?

My coach in Sweden had a huge role in developing my skills and me as a hockey player, but she was not involved in the recruiting process or finding a university team for me in the U.S. Since I have been on the national team, I also got to know many players who went to university in the U.S., and especially UMD.

How difficult was the process of getting to the U.S.?

I thought the process of getting to University in the U.S. was very challenging and complicated. There was a lot to do and prepare before I was able to go. What was very helpful to me was that the coach that recruited me [Laura Schuler] was very involved and willing to help. She answered very quickly to my e-mails and she was always willing to help or make things clear if there were things that I did not understand. She guided me through the whole processes and was a huge help.

What were your first impressions of the U.S.? College?

I had been in the U.S. before so I had a picture of how it was going to be. People were very social and nice, and they also understand the challenge of being form another country [that] speaks another language. It took a while to get used to the language, especially listening and speaking skills. My impressions were very positive. College was the most challenging the first semester and especially the first week of school. But the teachers were very helpful and they always made sure I understood the concepts and was on track.

How hard (or easy) was it being so far from home?

I enjoyed being on my own and getting challenged. At the same time I also had Michelle and Maria around me, which both of them felt like family since we had spent so much time together before coming here. Also getting to know the team and the staff made me be comfortable being so far from home.

I think there is nothing that I did not miss from Sweden. I did not know Stockholm was that close to my heart as it is, and I have realized it more the more I am away from it. I missed my family and my friends from home and especially my boyfriend Niclas, who I lived with for one year before moving here. I also missed my old teammates in AIK, they were like a big family for me in two years before moving here. Food is also something that I missed a lot; there are similar things here to buy in the grocery store but I would say that the food culture is much different. I missed all kinds of foods.

What are some of the things that you love about the U.S.? Or things you don’t love so much?

There is a lot that I love about the U.S. and going to a university here and playing for the UMD Bulldogs. The most amazing thing is the people that surround you. You meet friends and teammates all around the world as well as professors and coaching staff. And you also get to meet the fans that are cheering for you during games. Getting to know the coaches staff and the teammates and all the time that we have spent together and what we have accomplished is probably going to be the most memorable times. Things that I like less if I have to say something would probably be the food culture and some living standards regarding insulation for the houses. My first year here at UMD, I lived in old houses that had bad insulation so it was very cold in the middle of the winter. But now my sophomore year, I have moved to apartments and I love to live here.

Any advice for anyone from Sweden or another country coming to the U.S. to play a sport in college?

The most important thing is to have courage and get to know people and not be scared of [making] mistakes; it is better to try to speak English than to not speak at all. Everyone is so open, and they understand that it is challenging to be from another country.

How is the game similar/different than back home?

It is different in many ways. The rink has a different size here, which make the game more challenging and quick, which I love. The game is more physical and tough. The teams are very even, and no game is a granted win. I also think the Swedish league has changed a lot since I played there so I think they are catching up a bit and are becoming better and better for every year. In the rinks in Sweden, there is more space to skate on, which contribute to a little different game.

What drew you to Duluth?

Knowing some of the Swedish players that had been here playing inspired me to go here. Getting to know their personalities and the way they played hockey made me look up to them and start dreaming of a college career. Most of the very good Swedish players went to UMD, so that became the place where I also wanted to go.

A typical day in season is waking up to have a good breakfast, then go to class from 8 a.m. to 12 or 1 p.m. and then go home for lunch and call home and speak to family. I also try to get some homework done. After lunch we go down to the rink to get ready for Ice; sometimes we have video before practice to get ready for the games on the weekends. After video we go on the ice and have practice between one to two hours. After the ice practice, we either do lifting or yoga. After workouts, I go back home to have dinner and then study for the rest of the day.

Game days are often different from a normal day in the week. Sometimes we have game skate in the morning and breakfast together. Then we go to our rooms if we are away or just home to the apartment if we are home, to rest and recover. Two hours and 30 minutes before the game starts, we go down to the rink for video. After video, we used to play a soccer game before warm up to get the competing going. Then we have off ice and on ice warmup before the game starts. After games, there are postgame meals and bedtime.

What are you majoring in and what do you plan to do after graduating?

I am majoring in finance, but I am not quite sure what I want to do after university. I am doing internships during the summer to find out more what I am enjoying to work with and what makes me interested in working within. Finance is broad, and I think it is an important area to know about when working with most of the business related jobs.

What does the future hold for hockey? What are you hoping to do?

My dreams and goals for hockey are to win both the WCHA [Western Collegiate Hockey Association] and NCAA and also to win an Olympic gold medal one day.