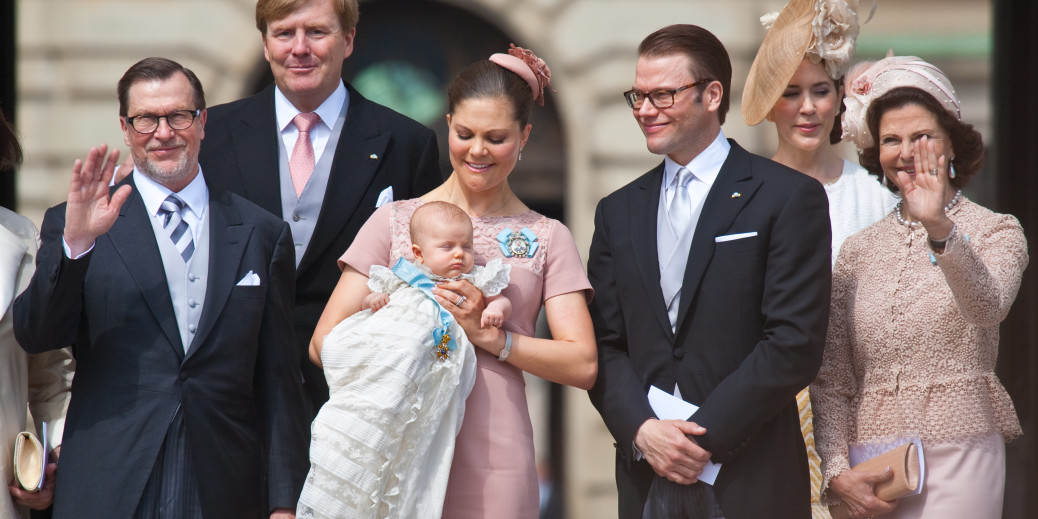 On February 23, 2012, Sweden welcomed Princess Estelle, Duchess of Östergötland. Estelle is the first child of Crown Princess Victoria of Sweden and Prince Daniel, Duke of Västergötland and is second in line of succession to the Swedish throne, but we doubt that she has fully grasped that concept yet.

In four short years, the princess has stolen the heart of the nation with her grace, contagious smile and energy. Throughout her childhood, she has been a firm favorite of the paparazzi, who have caught some of her cutest moments on camera. Although she’ll now have to share some of the spotlight with little brother Prince Oscar in early March.

One of Princess Estelle’s first public appearances was at her baptism. Her christening was held at the stunning, gold-trimmed 17th-century chapel where her ancestors have been baptized for generations. Surrounded by her family and family friends, the little princess stayed calm and collected while staring at everything around her, taking it all in. Hardly making a sound as Archbishop of Uppsala, Anders Wejryd, proceeded with the ritual, the princess with the chubby cheeks just sat back in her dad’s arms, merely opening her eyes curiously as baptismal water was poured over her head. Not a single tear was shed by the princess, unlike her proud mother who became misty eyed during the ceremony.

When Princess Estelle was just 2 years old, she started daycare. On her first day of school, the paparazzi prepped for what they thought would be a crying kid. Instead they were met by an almost grown-up version of Princess Estelle, who showed up full of giggles and smiles. She was joined by her parents, who seemed more nervous than their adorable daughter. Behaving impeccably, the princess held her parents’ hands tightly as she walked up to the entrance of her new school in Stockholm. She looked incredibly cute in a floral blue and white top, grey cardigan and jeans with a blue bow in her hair. Before heading inside to start off her day while in her father’s arms, Princess Estelle delighted photographers as she flashed them a toothy smile. Her mother watched on clutching little Estelle’s red school bag.

At the age of 3, Princess Estelle stole the show at her mother’s 38th birthday party when she charmed the crowd by hiding under an umbrella, playing with a dog and wearing homemade jewelry. While celebrating at the Solliden Palace, the toddler looked adorable holding a pale blue umbrella in a pastel blue floral-print dress, cream cardigan and leather shoes. Princess Estelle poked around on the grounds of the family’s summer residence with her pet dog, petting it and chasing after it. King Carl XVI Gustaf and Queen Silvia also joined in on the celebrations much to the delight of the little princess who kept her grandmother company throughout the day.

In 2015, Crown Princess Victoria enlisted the help of Prince Daniel and Princess Estelle to film a festive greeting to the people of Sweden. In the video filmed at The Bakehouse at Skansen Museum and Zoo in Stockholm, the royal family was shown baking together as they prepared for the festivities. With the stone oven burning hot and Christmas decorations abound, it was a beautiful scene for the family to cozy up and share in the spirit of Christmas. Viewers even get to see Princess Victoria embracing her husband in a cute moment. The video also shows an excitable Princess Estelle with her hair tied in pigtails chatting away to her parents. Wearing a gingham apron she helped her parents to roll the dough before placing it into a traditional wood fire oven. The young princess went on to wish viewers and royal fans a Merry Christmas as she stood between her proud parents. The Swedish royals released this one-minute video on their official Facebook page in December 2015 and social media lit up with thousands of views in under an hour along with comments from fans wishing the Royal family a Merry Christmas and Happy New Year.

When her parents decided to tour Tesla and a flurry of other tech startups in 2015, Princess Estelle stole America’s heart from the moment she landed on its soil. The little princess shook hands with dignitaries much to the delight of photographers and accepted flowers from those who came to see her. She was definitely not overwhelmed by the masses of people present, and even smiled and waved to onlookers, and sang with other children.

A child brought into royalty in these modern times is precious and rare, and it is a pleasure to see a princess like Estelle grow up before our very eyes.