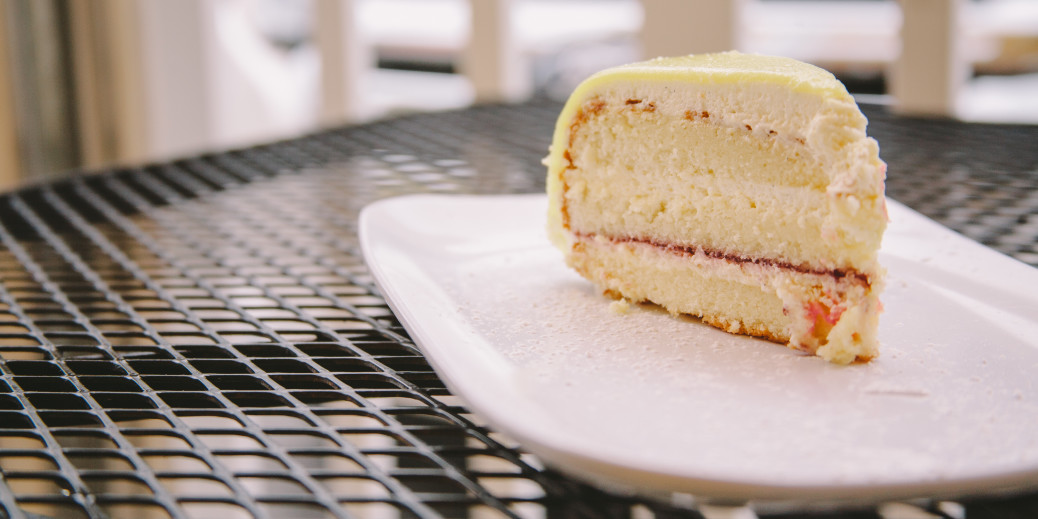 Among the great innovations that Swedes have bestowed on the world – zippers and pacemakers, Nobel prizes and Ikea, among them – perhaps the one that takes the cake, so to speak, is, well…cake. Introducing her royal highness of pastry, the Swedish princess cake.

To be clear, this is not to be mistaken for the “princess cake” that some American mothers concoct for their daughters’ birthday parties – those pink-and-white-frosted lacy cakes adorned with tiara-crowned Barbies or Disney figures and served amid a sugar-infused cacophony of princess wannabes.

No, the prinsesstårta is the consummate confection, a delicate layering of sponge cake, custard and raspberry jam, topped with a thick dome of whipped cream and capped with a layer of smooth, sweet marzipan, traditionally tinted a subtle tea green. A dusting of powdered sugar and a signature pink marzipan rose often complete the effect.

If baking is an art form, the princess cake is a masterpiece. That makes Jenny Åkerström the master. A food writer and noted teacher who ran an eponymous home-economics school in Stockholm around the turn of the last century, she had at one point in her charge Sweden’s three crown princesses. Legend has it that the royal trio had a fondness for their teacher’s “green cake,” the recipe for which Åkerström eventually included in her Princess Cookbook series published in the first half of the 1900s.

And so began the princess cake tradition, and in the more than half century to follow, generations of Swedes crowned their sweet tooth with the decadent tårta. It has become a staple at Swedish bakeries and a popular choice for the afternoon fika, the Swedish version of the coffee break almost always accompanied by pastries or other sweet treats.

In the United States, a true princess cake is far more elusive.

Search Yelp in Brooklyn, one of the nation’s Swedish strongholds, and even there the cakes are hard to find. One version pops up at the Little Cupcake Bakeshop. Even so, Chef Louie’s Dreaming Princess cake is a bit of a departure from the traditional. LCB’s take on the regal delicacy employs three layers of almond cake along with the requisite raspberry preserves, but betwixt the layers you’ll find dollops of vanilla bean buttercream and on top, instead of marzipan, a decadent meringue frosting and toasted almonds. It’s one of the shop’s best sellers. The absence of marzipan is no surprise. According to Eliza Williamson, marzipan is traditionally a European frosting and hard to find in America. Williamson ought to know. She runs the Swedish Bakery in the historically Swedish-dominated Chicago neighborhood of Andersonville where they have been baking Scandinavian treats – marzariners, toska tarts and the like – since 1928. In a bow to tradition, they call their version of the green-hued princess cake “marzipan cakes” and as testament to their rarity, the Swedish Bakery ships their best-selling marzipan cakes to aficionados all over the country.

If you live in the San Francisco Bay area, you won’t have to wait for the mail.  Schubert’s Bakery, a fixture on Clement Street for more than 70 years, bakes princess cakes that hew closely to Swedish traditions. The cakes come in seven different sizes, including one big enough to serve as many as 100 people. One of the local fans is Victoria Edison, who says she first stumbled on Princess Cakes when she was 22 and dating a Swede. And she was hooked.

“What I like about the cakes is the crunchiness of the marzipan topping, and contrasting with it is the creamy and smooth fluffy cake and custardy filling,” Edison said.

Thinking more about the cakes – coupled with her history of dating Swedish men back in her early to mid-20s – Victoria goes so far as to see princess cakes as a kind of metaphor for Swedes’ relationship with food.

“I think Swedes are very proud people who are also very serious about their food but not in a pretentious way,” she offered. “And that seems to be how I would describe princess cakes – a very serious, fanciful dessert but without the pretense.”

As elusive as the Swedish princess cake is on this side of the Atlantic, it turns out that a miniature version of the tarta is more widely available than we might have thought. The home of all things Swedish – Ikea – actually sells a small cake it calls Bakelse Prinsess. The retailer describes it as “a cream cake with raspberry and vanilla custard filling, coated with pink marzipan.” At just over 11 ounces, it’s perfect for an afternoon fika.

Of course, there’s another option to satisfy your Princess Cake fix: Bake one yourself. But be warned, the cake has a reputation for being fiendishly difficult, with no fewer than 14 steps and 17 ingredients in some recipes. If any cake is worth the trouble, it has to be the prinsesstårta.  The experts at The Food Network say you can whip up the cake in an hour, plus another 30 minutes baking time. You can find that recipe here.

If you are more of a visual learner, you can follow along here on YouTube with Colin Starfish.  He calls the preparation “freaking tricky” but shows patience and good humor along the way.

Bon appetit, or as Jenny used to say, smaklig måltid.

Editor’s note: The Swedish Bakery in Andersonville closed in February of 2017 after 88 years of business.