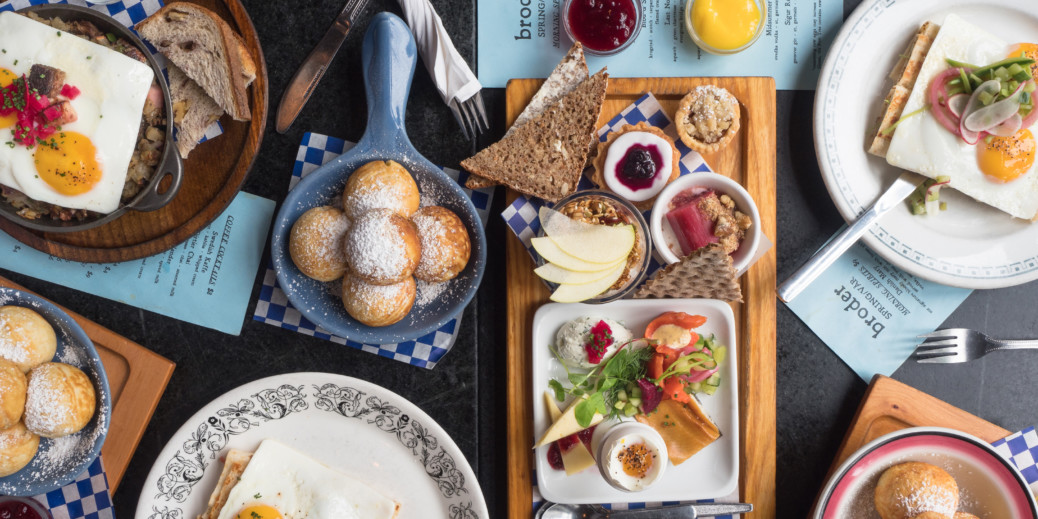 Portland restaurateur Peter Bro had to look no further than his Swedish heritage and Midwestern upbringing to find inspiration for his restaurant empire Broder, four Nordic-inspired breakfast and lunch eateries that are a sensation in the Portland, Ore., restaurant community.

While attending the University of Wisconsin-Madison, Bro helped run a bar, giving him a solid background in restaurant management and the food industry. And then in 1996, when he moved out to Portland, he started working in the food industry and eventually took over the bar Aalto Lounge, named for Finnish architect and designer Hugo Alvar Henrik Aalto.

With a background in construction and interior design, the restaurant merged Bro’s two passions of food and design. And, while running the bar, naturally Bro met many Nordic people who were fans of Aalto’s midcentury modern designs.

“It was fun to own something like that,” Bro said. “To play with interiors and learn more about the Nordic and Finnish culture.”

After running Aalto, Bro opened Portland’s Savoy Tavern, a restaurant where he paid homage to his Wisconsin roots, in 2005. With Swedish and German-Jewish heritage, Bro wanted to serve some of the dishes he remembered from back home, like boiled potatoes, homemade sausage and herring.

“The menu was more about the supper club elements of Wisconsin, which are a lot of meat and potatoes,” he said.

Wisconsin has a rich history of supper clubs, some of which still exist today. At these supper clubs, Fridays entail a large fish fry, and at other dinners, dishes like prime rib, steak, pork and chicken are served with two sides. “It incorporates a little bit of everything from every country,” Bro said of the restaurant’s offerings. “The bulk of the menu is mostly Swedish and Danish, but we do have Finnish.”

Bro is taking traditional Nordic dishes and using fresh ingredients local to the Portland area. And because of the climate, the ingredients like lingonberries and fresh seafood are readily available.

“We are in a similar climate and latitude as the Nordic region,” he said. “We can grow the berries, and we have similar seafood options and greens.”

The restaurant also has a robust breakfast cocktail program on the weekends, serving up bloody marys with dill-infused aquavit. Bro currently is collaborating with Portland’s House Spirits Distillery to bottle an aquavit for the restaurant.

“It’s a huge component of the Nordic culture,” Bro said of the neutral grain spirit that has hints of caraway, coriander and lemon.

“Bartenders are realizing it can be a really versatile spirit. And it’s the U.S. that is embracing it to a greater degree the Nordic region.”

Bro’s new aquavit collab is slated to be released in February or March of 2018.

Over the years Broder slowly has expanded to have three sister restaurants — Broder Nord in 2012, Broder Söder in 2015 in the new Nordic Northwest’s cultural center Nordia House, and Broder Øst, which opened in 2016 in Hood River, Ore.

“One thing I have really noticed is this extension of the New Nordic cuisine and culture in general,” Bro said. “There is an appeal of the cleanness of the food and simplicity of the dishes’ architecture.”

“And, what I like about it is that it hasn’t gone away. It’s been really nice to experience the staying power or the stickiness of people really appreciating the culture, and that has helped us. It’s had a 10-year run, and there’s no signs of it dying out.”