Most 8-year-olds spend their days watching cartoons, learning multiplication tables and playing outside.

Inger Nilsson wasn’t your average 8-year-old. In fact, she was the girl most 8-year-olds wanted to be.

Pippi Longstocking is the quirky, independent and red-headed main character in Swedish author Astrid Lindgren’s children’s book series. The books resonate with children (and adults) all over the world, and Lindgren’s stories have been shared in 70 languages, made into movies and adapted for TV. One of the most popular adaptations of Lindgren’s work was the 1969 TV series, “Pippi Longstocking” (“Pippi Långstrump” in Sweden) a 13-episode show written by Lindgren herself and directed by Olle Hellbom.

Today, the audition process for movies and auditions is tedious at best. Actors, regardless of age, are expected to have a manager or agent to help legitimize their standing in the film world. Resumes are printed. Headshots are professionally taken. Audition after audition. The list goes on.

The legendary Pippi Longstocking books were being made for TV, and producers needed to find children to play Pippi and her sidekicks, Annika and Tommy.

“They were asking on television for someone who could play Pippi, Tommy and Annika,” recalled Nilsson. “I saw it on the TV, and I remember my father said, ‘How about that? Do you think we should send a photo of you?’ I said something like, ‘Let’s do it.’ So, we sent a photo to the film company, but I forgot about it because I was 8, and there were so many other things [going on] in life.”

Without having any prior acting experience, Nilsson went from sending in a photo on a whim, to auditioning, to landing the lead role of Pippi Longstocking.

Being young and new to the television world, Nilsson relied on Hellbom to help bring Pippi to life.

“[Hellbom] told us how to act,” said Nilsson. “So, it’s not that I interpreted how to play Pippi, it was his idea of her. He was teaching us very hard. When it’s a movie you have to go there, stop there –  it’s not like you are improvising. It was very important to do exactly what they ask you to do.”

The many children envious of Nilsson and her role as the free-spirited, parent-less, freckly girl might be surprised that Nilsson’s favorite memories were away from all the cameras. The series was filmed on the island of Gotland in Sweden, so while the show was being filmed, the crew lived on the island like a big happy family.

Imagine being 8, on an island full of kids your age and new places to explore. That is the dream.

“The whole crew lived together on this island for the whole summer. So, that was really fun, everyone’s children were there, and we were playing around. Of course, it was a lot of hard work, but from what I remember, it was really fun, and we had a lot of fun with each other and the crew.” 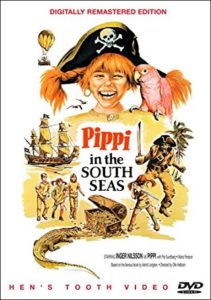 The Pippi TV series became a staple in households across both Sweden and America, with the series redubbed as two feature films for distribution in the United States. And in 1970, Nilsson and the rest of the cast supported two spinoff feature films: “Pippi in the South Seas” (Swedish title, “Pippi Långstrump på de sju haven”) and “Pippi on the Run” (Swedish title, “På rymmen med Pippi Långstrump”).

Pippi Longstocking was not a normal kid. She was a free-spirited rascal, while being immensely independent, street-smart and loyal (sometimes to a fault). Lindgren’s clever writing and Nilsson’s quirky portrayal brought the character of Pippi to life, and it’s because of the character and her wild adventures that the whole world latched on to the books, TV show and movies.

Nilsson remembers her time as Pippi fondly but has come a long way from the bright-eyed, pig-tailed girl who’d never been in front of a camera.

Today, she is living in Stockholm and working in both theater and TV. She’s currently filming her 11th season of the German crime series “Inspector and the Sea,” where she plays the role of the pathologist.

For her role, Nilsson has turned to American shows like “CSI: Miami” and “NCIS: Los Angeles” for inspiration, but what she reveals shows her subtle sense of humor.

“[CSI is] a little bit like pathology, so I try to copy that,” Nilsson said. “The women are all hanging over the dead bodies with their high heels, and they are all very good looking. So, I told our German crew, ‘I want to be a little bit like CSI.’”

From Pippi to pathology, Nilsson continues to do what she loves and encourages others to do the same.

“If you really love [acting], you will succeed, I’m sure,” she said. “You have to be yourself, listen to a lot of people, and take the advice they give you. Just be open… And of course, you have to believe in yourself.”