All photos via Olsons Deli 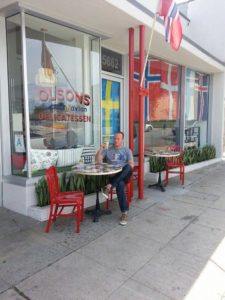 Nestled on the culturally diverse block of Pico Boulevard, Olsons Scandinavian Delicatessen has been a Scandinavian tradition in Los Angeles since 1948. The deli’s current owner, Christian Kneedler, remembers the shop fondly from trips as a kid.

“I’ve been going to Olsons pretty much since I moved here,” Kneedler said. “That’s the only place that you could buy Scandinavian stuff.”

Originally from Sweden, Kneedler moved to the United States in 1984 to visit his American grandparents. He stayed for a year, moved back to Sweden for eight months and then returned to California.

“The weather was a big factor,” Kneedler joked.

In his 20s, Kneedler started bartending and working at restaurants in the Los Angeles area. He dreamed of opening a restaurant with a Scandinavian influence. 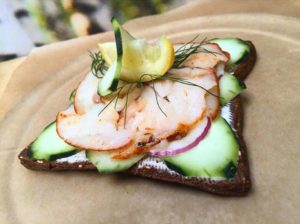 The opportunity presented itself in 2013 when Kneedler purchased Olsons Deli from Bertil Ohlsson. Bertil and his wife Helene, who have since passed away, ran the store since 1956, helping create a fixture beloved by Swedes and Americans alike.

Before reopening, Kneedler focused on remodeling the Swedish landmark, adding wood accents, birch forest
wallpaper and beveled subway tile. His aunt, who lives in the United States, gave him a set of Scandinavian paintings from the 1900s including portraits, landscapes and reindeer that now hang on the deli’s walls. He also revamped the recipes and menu.

“I redid the menu,” Kneedler said. “I did more sandwiches so it could be a café and deli. The sandwiches are my pride, so to speak. I made the business an everyday business.”

The former store attracted most of its customers around the holidays for gifts. Kneedler worked to make the deli a year-round destination. Customers can order traditional Scandinavian-style dishes like shrimp skagen, meatballs and beet salad and gravlax. More “American” options like chicken salad and ham and cheese also are available. Everything is made from scratch. 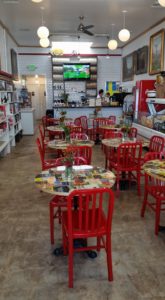 The deli is neighborhood favorite, attracting both Swedes and non-Swedes. And it wouldn’t be L.A. without a few star sightings: A-listers Alicia Vikander and Peter Stormare both have visited the deli.

In addition to sandwiches and deli meats, the store sells Swedish books on consignment. Visitors can pick up Scandinavian books on design or history or even children’s books. Olsons also offers Swedish candy by the pound.

“The salty licorice is my favorite. It’s an acquired taste,” Kneedler said.

While Kneedler loves life in L.A., he does miss a few things about Sweden, including the summers in Stockholm’s archipelago and the robust public transportation and biking infrastructure.