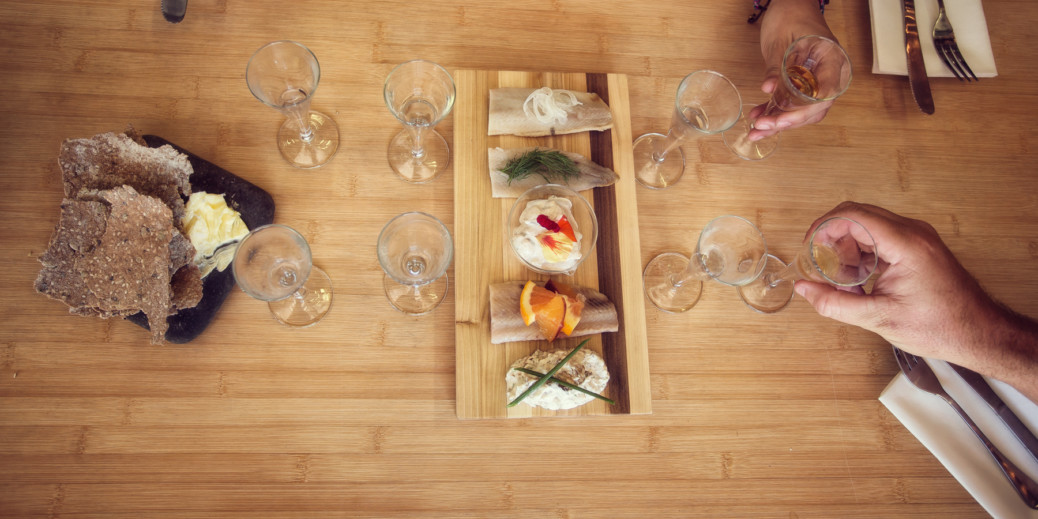 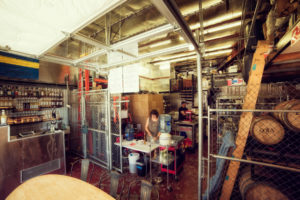 When your Swedish host invites you home for a smörgåsbord, you know the table will be loaded with an array of traditional Scandinavian foods.

You also should expect to see a few bottles of aquavit, each uniquely flavored differently – subtlety in some cases and aggressively in others – to accompany those food offerings. That’s because “aquavit is … a food-pairing liquor,” said Lexi, the founder of the Old Ballard Liquor Co. who has built a loyal following by using only a single name.

Old Ballard takes its name from its home in that historic Scandinavian fishing and blue-collar community of Seattle. Billed as an “artisan nano-distillery” that at its core, produces aquavit, a caraway-flavored digestif that’s long been designed to be served with meals.

In the spirit of using different grapes to build different profiles that you can marry with foods to complement their flavors, Lexi and her team experiment with blends of herbs, spices, citrus extracts and more to develop aquavits that perfectly match with specific Nordic foods, including those legendary pickled fishes.

Throughout the year, Old Ballard features a rotating slate of aquavits, thoughtfully crafted to reflect the seasons and the foods that we crave in those moments. On top of that, because Old Ballard is a small-batch producer, Lexi promises the tasting room always will offer something new. Among the Scandinavian countries where aquavit finds its roots, each offers its own interpretation: Danish aquavit is a touch drier, while its Swedish counterpart is lightly sweetened, although rarely from sugar; those usually are distilled from grain. By law, Norwegian aquavit, often potato-based, must spend time in aged oak barrels.

A taste reveals the common thread: “As long as it has caraway, you’re good to go,” Lexi added.

With Old Ballard exploring each of those traditions, on any given day you might walk in to find the
Norwegian-style Riktig, flavored with caraway, mustard and two secret spices; the team then rests (federal guidelines here say only whiskey and brandy can be “aged”) the aquavit on alder. The final product goes well with rich meats, such as lamb or sausage.

During Christmas, the focus is on Tomten, a yuletide digestif made specifically for Swedish glögg, with baking spices – scan the exhaustive list and you’ll find allspice, ginger and cardamom – blending with the caraway base. For Easter, when oysters and mussels are plentiful from deep, cold waters offshore and the Pacific Northwest weather still holds a chill, Old Ballard creates the Swedish-style Älkar, meaning love. This citrusy aquavit accented with coriander, grains of paradise, caraway and other spices cuts through the seafood’s brininess.

By distilling inventive and complex versions that showcase aquavit’s role in Nordic culture, Lexi is hawking the digestif’s true flavor profiles and deep-seated history. The few U.S. producers largely distill the liquor with fennel and anise, leading many consumers to believe that aquavit should automatically flood your senses with licorice. While caraway is the earthy seed (with just a hint of anise) that’s the hallmark of rye bread, Old Ballard is about setting the record – and palette – straight on what an aquavit can and should taste like.

When Lexi launched the nano-distillery, she crisscrossed the city asking chefs and bartenders to offer food pairings, her strategy for touting aquavit and building her company. After struggling to get traction for her idea, she dug into her culinary roots – she once worked as a fishing boat cook and caterer – and added a 12-seat deli to the distillery. Building on the success of a pop-up concept dubbed Tumble Swede, Old Ballard now serves a seasonal selection of traditionally based Swedish foods, along with recommendations of the precise aquavit that will both complement and bring out the most flavors.

“It wasn’t a real tough jump for me to put together a menu,” said Lexi, stopping to stress that she is first-and-foremost seeking to build a cross-generational connection with Nordic food and drink. “We want to give people an experience that is a little more contemporary that relates to traditional Scandinavian food – not American Scandinavian food – something that they might not have had before, even though it was an old Scandinavian dish but they had never had it in America.”

In January, the menu featured a herrings bord, a tasting plate of five herrings with different seasonings; a räkmacka, or open-faced shrimp sandwich with dill; and a carrot soup spiked with aquavit spices. What isn’t on this or any month’s menu is Swedish meatballs. The eatery is about reimagining traditional foods.

Lexi’s personal favorite is the tunnbrödrulle, commonly known as “Swedish dunk food” that people stop for on the way home from a late night. Her version might include anise-flavored flatbread wrapping a hot dog, topped with mashed potatoes, mustard, ketchup and shrimp salad.

Returning to her roots

Lexi is rekindling her Scandinavian roots with the evolution of Old Ballard. Her family long ago settled in the Skagit Valley, where Nordic immigrants mingled with Native Americans and built agricultural traditions. While she was the first generation “raised in the city,” Lexi noted “this culture is distinct and very strong. We like to grow our own food, and we can and do pickle cod with lemon three times a week. … When you grew up with that, you didn’t really notice it, but I started to see familiar threads.”

In fact, the Pacific Northwest climate largely mirrors that of Sweden, meaning that local products are quite similar. The region provides easy access for her to find the kinds of ingredients that are indigenous to Nordic cuisine, such as fresh herring and salmon, berries and much more.

As a young adult, Lexi spent three years in Sweden, largely studying the nation’s folk art. That time also gave her the hands-on experiences to tie the threads of her childhood with the Nordic traditions and culture.

After a subsequent stint in the North Slope of Alaska where she worked surveying and developing software, the long shifts and dark nights got her mind thinking back to Sweden, and “it all started making sense,” she said. “We get nostalgic for our youth.”

Spreading the spirit of aquavit

With a spark of an idea, Lexi returned to the Seattle area, cashed out her 401(k) retirement plan and opened a distillery.

In Ballard, she found a venue that values “simplicity, honesty, pragmatism, hard work and humility,” as she describes on the distillery website. “Also drinking and fighting, but we don’t fight much these days.”

The first liquor to come out of her fledging distillery was Cherry Bounce, an old-fashioned liqueur based on sour cherries and inspired by Colonial American recipes. Old Ballard, using a heritage recipe originating with Martha Washington, is still the only U.S. producer making an authentic version.

Strict liquor laws in Washington, particularly for a craft producer, meant, in essence, that “as soon as I opened, it was already a failure,” she said. But her rebel spirit kicked in, and she started distilling aquavit. Her inaugural 45-gallon output of Riktig sold out in three days. The trend continued with the next two batches, and she had the foundation for her business.

The challenge for a small-batch distiller is that shipping is permitted only to a handful of states, and privatization in state liquor distribution leaves limited shelf space. Most sales still are done directly at Old Ballard.

Even with the explosive interest in recent years to craft cocktails, “it’s difficult to get aquavit distributed to other states,” Lexi said. “Most distributors don’t understand aquavit. They don’t really understand the populations that will buy aquavit.”

During the year, Lexi spends a good amount of time on the road, traveling around the country to offer workshops about aquavit and sharing her experiences to help would-be distillers pursue their dreams. Meanwhile, Old Ballard has been featured increasingly among liquor and cultural media outlets. And the distillery gained some unprecedented attention in 2016, Lexi noted, when Swedish-born Alicia Vikander selected Old Ballard bottlings for gifts honoring her Oscar nomination (and subsequent win) for supporting actress in “The Danish Girl.”

But even with this burgeoning awareness for aquavit, people still are learning how to best enjoy this digestif. Lexi offers one simple tip for when you arrive at any Swede-hosted party: Don’t put any ice in your glass before you pour in your aquavit. A conscientious host will have parked those bottles in the fridge or freezer in advance, so your drink is ready to enjoy chilled to the perfect temperature.