John Matton has traveled the world to pursue his career in acting and producing. Now living in New York, he’s in the second year of what could be his most impactful role.

Matton, a 31-year-old native of Stockholm, is the co-founder of the Nordic International Film Festival (NIFF), a celebration of Nordic international films that returns to the Scandinavia House on Park Avenue Oct. 28-30. The second-annual festival not only will feature 20 films, but it also will give fans of international film the opportunity to discuss the films with some of the actors and directors who made them.

“We were so happy,” said Matton, also the president and festival director of NIFF, of last year’s festival debut. “It couldn’t have been more of a success. All this hard work came back to us…it really became about the filmmakers and not us.”

Matton was a TV actor in Sweden before moving to Spain and then Thailand. When we caught up with him on Oct. 7, it happened to be the seventh anniversary of his move to New York to attend the acclaimed Circle in the Square Theatre School.

A couple years after graduating, Matton came to a realization: He didn’t want to be dependent on auditioning for roles and being told no more than yes, a process he called, “The chase.” He started Changing Film Productions, which works with independent filmmakers on all aspects of getting their ideas to finished product.

His 2015 film “Till We Meet Again,” which stars Matton and his partner at Changing Film Productions and fellow Swede, Linnea Larsdotter, won awards for the Best Feature Film at the Long Beach International Film Festival and Best Picture at the Los Angeles Independent Film Festival. It debuts in theaters this month.

As Matton’s production company was beginning to take off, he came to another realization: In all his travels and work in the film industry, including attending film festivals, he had never come across a film festival that showcased both Nordic and international independent films and celebrated the actors, writers, producers and directors behind them.

“We can do this much better,” Matton thought at the time. “Let’s start our own and try to get the word out there to help filmmakers.”

He and Larsdotter founded the Nordic International Film Festival in April of 2015 with the hope of celebrating fine film and helping independent filmmakers connect with distributors for their films. The team solicited independent films from Scandinavia and all over the world, ultimately selecting the films that would be shown at the inaugural festival. 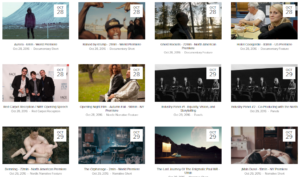 This year’s festival attracted submissions from some 300 filmmakers, making it a year-round process for Matton, Larsdotter and a handful of teammates to review and select the films. They watch for everything: acting, writing, the pace of editing, cinematography and storytelling, to name a few.

NIFF is squeezing in 20 films this year – many of which will make their North American premiere – and has expanded from two to three days. It also will feature a pair of industry panels, the first covering equality, vision and storytelling that features three female filmmakers discussing their experiences in the industry, the second on how filmmakers from all over the world can work together with Scandinavian or European filmmakers on producing or financing their films. With support from the Swedish Film Institute and Danish Film Institute and others, they’ll fly actors and directors in to discuss their films. And ultimately, they’ll pick winners in a variety of categories.

“There are a lot of high-quality films, especially in the feature categories,” Matton said. “There are so many films that we get to see for the first time that people haven’t seen.”