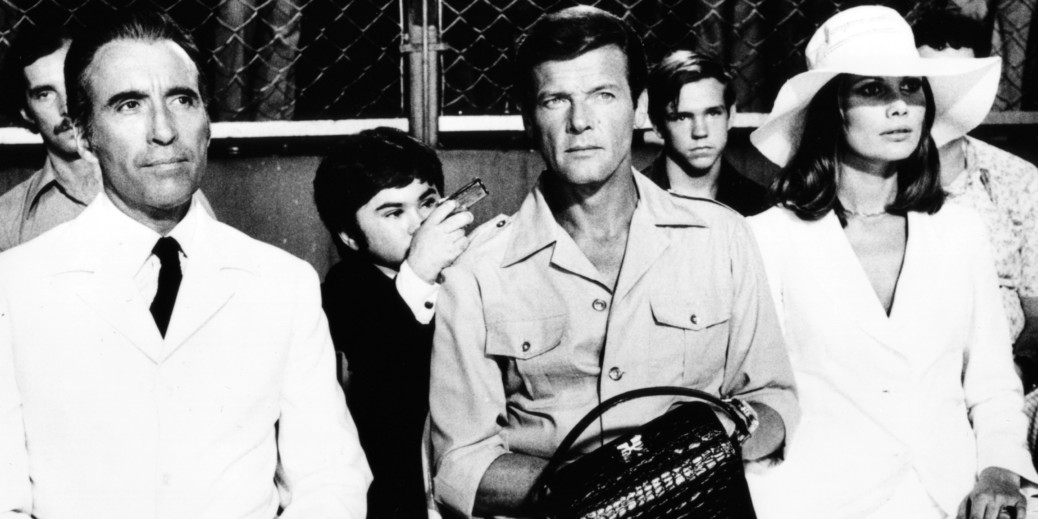 Nearly 20 years ago, Maud Adams and her husband of a year visited an island in St. Vincent, where she met an aspiring writer who was on his honeymoon.

Making small talk after introductions, she asked the writer what he did for a living and was interested in talking about writing because she was going to start writing a column for a fashion magazine. She was nervous about it and was reading Anne Lamott’s splendid writing guide “Bird By Bird” to help her prepare.

A big James Bond fan, the writer asked about her career. She sheepishly said she had done some acting. The writer pressed – he only knew of one actress named Maud – and asked if she had been in anything big. She confirmed his suspicions. This was the Maud Adams, the Bond girl, the Bond girl who stirred his interest in Bond movies when he was 10.

That’s why it wasn’t all that surprising that shortly into a 90-minute interview with that same writer earlier this year that Adams said, “I’ve never really been comfortable with attention.”

For the better part of four decades, from the time she was discovered as a model in 1963, Adams attracted plenty of attention. As a model who traveled the world working for Eileen Ford. As an actress who appeared on American TV shows like “Kojak,” “Hawaii Five-O” and “Starsky and Hutch” (and later “That ‘70s Show”). And certainly, as one of Roger Moore’s love interests in Bond flicks “The Man with the Golden Gun” and “Octopussy.”

“I’m pleased at what I was able to do but I’ve never thought of myself as a great dramatic actor,” she said. “I don’t like to talk about myself and my work that much, other than the fact that I have enjoyed it and got better at it.”

Growing up in Luleå, Sweden, one of Adams’ early passions was reading. She’d escape the frigid temperatures by putting her nose in a book, ultimately stumbling across American writers like John Steinbeck.

“I’d like to go to America one day, that was one of my dreams,” Adams recalled.

That seemed a long way off for a girl who walked to and from school and often put her fingers under hot water because they hurt so much because they were frozen.

A professed “gangly, tall, skinny girl,” Adams never thought modeling would be an option. Still she was recruited by one of her friends to do some local fashion shows. Her first shows were at a local shopping mall that, when it opened in 1955, was one of the first indoor shopping centers in the world and provided an escape to Luleå’s freezing temperatures.

A local photographer spotted Adams, then known as Maud Wikström, and asked if she’d be a model for a tourist brochure for the area. He snapped pictures of her fishing and water skiing, even though Adams said she had “never been water skiing my whole life…I was terrified of falling.” She stayed on her skies the first time. She saw the pictures and described herself as a “little wet rat in a bikini and had no shape whatsoever.”

That led to her being photographed holding a pearl necklace, a photo that was submitted to a family fashion magazine that had a “Model of the Year.” The once “gangly, tall, skinny girl” was chosen by readers as the winner and awarded a contract with a modeling agency.

“I was in a real bind,” Adams recalled. “My parents had reluctantly let me be a part of this. I had to convince them that this was something I could really do. I had to talk my parents into letting me leave school.”

Soon, Adams was modeling in places like Germany and Canada.

A star was in the making.

From Modeling to the Screen

Adams was asked to visit with Eileen and Jerry Ford of the legendary agency Ford Models. The Fords saw promise, but advised Adams to go to Paris for a year to gain experience working with some of the biggest photographers in the world. She worked a lot for Elle magazine and others.

After a year and a half, Eileen Ford brought Adams to New York City, and she became one of the biggest names in the business. Speaking of names, she married Roy Adams, a graphic designer turned photographer whom she had fallen in love with and accompanied her to Paris.

“It was exhilarating, and it was always difficult,” she said of her modeling career the next few years.

Adams constantly was on the go and often feeling like she was unprepared and trying to catch up. She described herself as feeling like “Alice in Wonderland.”

And then there’s that uneasy feeling with all the attention.

“I think it’s natural for Swedes, generally speaking, but especially for Northern Swedes who are known to be taciturn and introverted.”

Adams began making TV commercials, which led to a bit part in the 1970 movie “The Boys in the Band.” According to Adams, the actress and dancer Leslie Caron had been watching her modeling career and told her husband Michael Laughlin, a movie producer, to consider casting Adams for an upcoming project. That led to a call out of the blue from a director to see if Adams would be interested in a movie called “The Christian Licorice Store” with Beau Bridges.

“I’m thinking this is a joke, of course,” Adams said. “It’s not just a little part, it’s a leading role. Lo and behold, I got the part. My god, what do I do now? I’ve never acted in my life.”

Even though “The Christian Licorice Store” had a limited release, it enabled Adams to secure an agent and encouraged her to enroll in acting classes in New York. She didn’t have a Screen Actors Guild membership, so she did two Canadian films, “Mahoney’s Last Stand” (aka “Mahoney’s Estate”) and “U-Turn” (aka “The Girl in Blue”) to earn her membership.

Adams then was told that Cubby Broccoli, famed producer of James Bond movies, wanted to meet her as he was beginning to cast for “The Man with the Golden Gun.”

“Of course, I had heard of the Bond films, but I don’t know that I had even seen one at that point,” Adams said.

After meeting with Broccoli and others, the producer asked Adams to visit his hotel to meet his wife, Dana Wilson.

“Dana had strong influence on who they cast,” Adams said. “She approved everyone…Sean Connery, Roger Moore…I ended up getting the part.”

Dumbfounded, Adams spent the ensuing weeks finding out as much as she could about the Bond movies before shooting in Bangkok.

Traveling to Thailand, she met Britt Ekland, a fellow Swedish actress and star.

“You know Maud, I hated you when I first heard your name,” Adams recalled Ekland as saying when they met.

Ekland tested for “The Man with the Golden Gun” in London and told Adams she thought she had landed the part. She read that Adams had been cast in the new Bond movie.

“She thought she had this part and lost it to another Swedish actress,” Adams said.

“We became fast friends,” Adams said, adding that they are still very close.

Adams also became very close with Moore, who jokingly called his Swedish co-stars Mud and Bert. Before the movie started shooting, there was a press conference that Adams assumed would be small. Instead, it was in a conference room filled with cameras and media.

“Roger, the blessing, what a wonderful man,” she said. “He sort of sensed my insecurity. He was very supportive from the get go.”

The movie grossed nearly $100 million worldwide, with Adams starring as the villain’s mistress. It also featured her least favorite scene in her Bond movies. Answering criticism that Moore’s Bond wasn’t as tough as Connery’s Bond, Adams said they wanted to toughen him up.

Moore, who passed away last year, and Adams would reacquaint on screen nine years later.

“He was one of my biggest champions and always sweet and lovely,” Adams said. “He was always a wonderful guy. Roger never changed. He was always mocking himself and his ability, but he was a smart man. He used humor as to not taking himself so seriously.”

The Legacy of Being a Bond Girl (Twice)

“The Man with the Golden Gun” made Adams an international star that led to other movies like “Rollerball” and “Tattoo.”

She was starring on the NBC show “Chicago Story” with the likes of Craig T. Nelson, Dennis Franz and John Mahoney when she got a call from Cubby Broccoli that they wanted her to test with James Brolin, who was testing to replace Roger Moore as the next James Bond. Adams was asked to change her hair, so she let them turn her dark blonde hair to really dark brown. Adams said she knew something could be up, and maybe it was an attempt to get Moore to sign on for more Bond films.

“I had the part if I wanted it,” Adams said. “I’ve never quite been able to figure out why.”

The part was the title character in “Octopussy,” making Adams the only actress to appear as a lead Bond girl in two James Bond movies. Adams rationalizes that Moore, who did in fact sign on for two more films, was an older Bond.

“Octopussy” grossed nearly $190 million worldwide, and Adams “loved the part. Octopussy was this strong, powerful woman, and of course had this strong cadre of beautiful women.”

Included in the cadre is another Swedish actress, Kristina Wayborn, who is Adams’ right-hand woman.

The movie ends with Octopussy nursing an injured Bond on a boat destined to disappear for a while. What does Adams think happened to Octopussy?

“We know she didn’t marry James Bond,” Adams said before adding that Octopussy would be the kind of person to “drift into the sunset and you would never hear from her again.”

After “Octopussy,” Adams had a number of movie and TV credits, including an uncredited appearance as a background character in Moore’s last Bond movie, “A View to a Kill,” over the next decade.

But, she’ll forever be known as a Bond girl.

The Bond movies, she said, seem quaint today and have a charm and innocence.

“Obviously, they have changed completely the direction of my life,” she said. “I look back on them very fondly and how incredibly lucky I have been…they are fantastic memories; they will always be a part of me.”