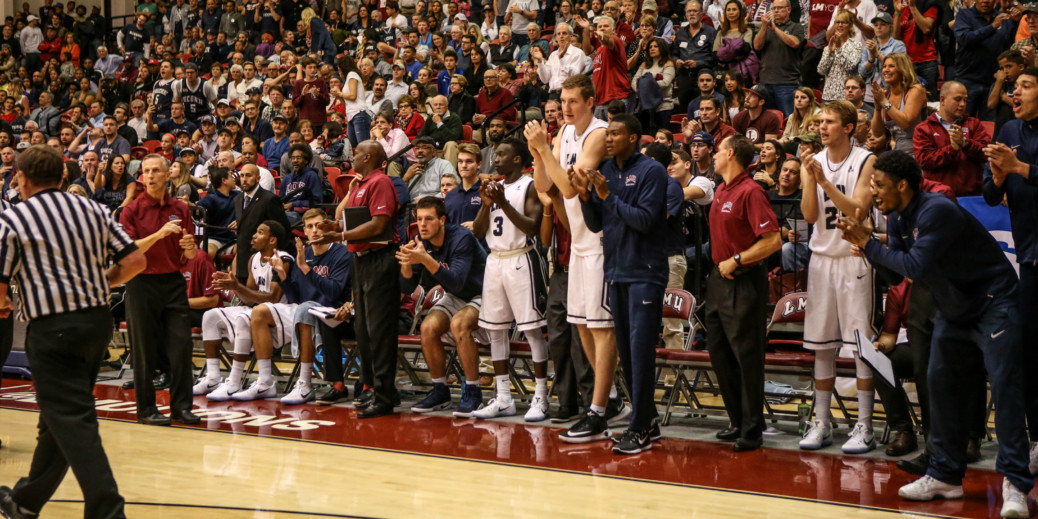 The start of March means one thing for sports fans: Madness is right around the corner.

March Madness, the barrage of college basketball games that make up the NCAA Division I Men’s College Basketball Tournament, kicks off on Selection Sunday on March 12.

Roughly 350 teams across the country are jockeying for position to be among the 68 teams chosen to take part in “The Big Dance.” Among the hundreds of athletes are about a dozen Swedes, according to Real GM, who are coupling the opportunity to improve their games against the top competition in the world with an American college education.

Loyola Marymount University features a pair of Swedes in Erik Johansson and Mattias Markusson, who played together in the Swedish National Team program and against each other on various club teams. Johansson, a 6-5 freshman guard from Sodertalje, has made seven starts and has made 25 3-pointers for the 15-14 Lions. Markusson is a 7-1 freshman center from Vasterled who averages a couple points a game.

“We knew each other from back home,” Johansson said. “He [Markusson] spoke very highly of the whole program and confirmed the beliefs and the picture I had.”

For Johansson, his path to American hoops started two or three years ago when he was playing with the Swedish youth national teams and plenty of college coaches were on hand to look at players.

“I had some interest in other D-I programs,” he said. “I liked the coaching staff and the history of the program. It just sounded like the perfect fit.”

Markusson was thinking of staying in Europe and possibly playing professionally. He had played with a few guys who played in college and liked what he heard. Coaches from LMU visited Sweden three times, and the center liked the fact the Lions use big men a lot.

Markusson also thought playing in the States would help him accomplish his goal.

“Of course, play pro,” he said. “I came here for the education, too…I want to make my living in basketball; that’s what I love.”

Davidson College’s Will Magarity seemed destined for NCAA hoops. His father William (Bill) Magarity played at Georgia before playing professionally in Sweden, where he met his wife Ammi, who herself played for the Swedish National team. Magarity’s uncle Dave Magarity coaches the women’s team at Army; his cousin Maureen Magarity leads the women’s team at New Hampshire; and his brother-in-law Dan Earl is the head men’s coach at Virginia Military Institute.

When he was 14 or 15, he hit a growth spurt and was pretty talented. His parents sat him down and had a simple message: “If this is something you want to pursue as a lifestyle, you need that commitment,” Magarity remembered.

Over the next few years, his game continued to improve and his dad would tell stories of his days playing at Georgia. The Magarity family made annual summer trips to his father’s hometown of Philadelphia to see family and visit the Jersey Shore.

“I was exposed to the idea of going to school here,” said Magarity, whose sister Regan plays at Virginia Tech.

When it came time to choose an American college, Magarity leaned into that network for advice and chose to attend Boston College. However, the coach who recruited him was dismissed after Magarity’s first year. A year later, Magarity decided to transfer to Davidson.

“We picked each other,” said Magarity, a 6-11 forward who has started 24 games and ranks third on the team with nine points a game. “It’s a small school. There’s something special about this place, at least for me. I haven’t regretted a day since I stepped on campus.”

But the transition to American college life and American basketball isn’t always a layup.

According to LMU’s Johansson, there wasn’t a lot of culture shock because “Sweden is a very Americanized country in many ways.” But all the little things add up: the food is a little different; everything he studies is in English; people are “super nice and super polite” in a different way than Swedes, who are introverted.

As for the game itself, Markusson and Johansson agreed that the American game is much faster.

“The big guys back in Sweden aren’t as quick, explosive or athletic,” Markusson said. “They’re more powerful here. It’s been an adjustment.”

Magarity added, “In Europe, I could outjump some people. My advantage, now is a disadvantage. Some of these players are much stronger and much more athletic. I have to play smarter.”

As far as what they miss, the players each mentioned family and friends, and Magarity misses the “bar-none, phenomenal” Swedish summers and is “planning on going home for a month and soak in that Swedish summer.”

But the chance to chase their hoop dreams and secure a valuable college degree is well worth it.

“Just the possibility to combine the education here with the athletic part of it is huge for me,” Johansson said. “It’s really, really hard to combine education and athletics this way back home and other parts of Europe.”