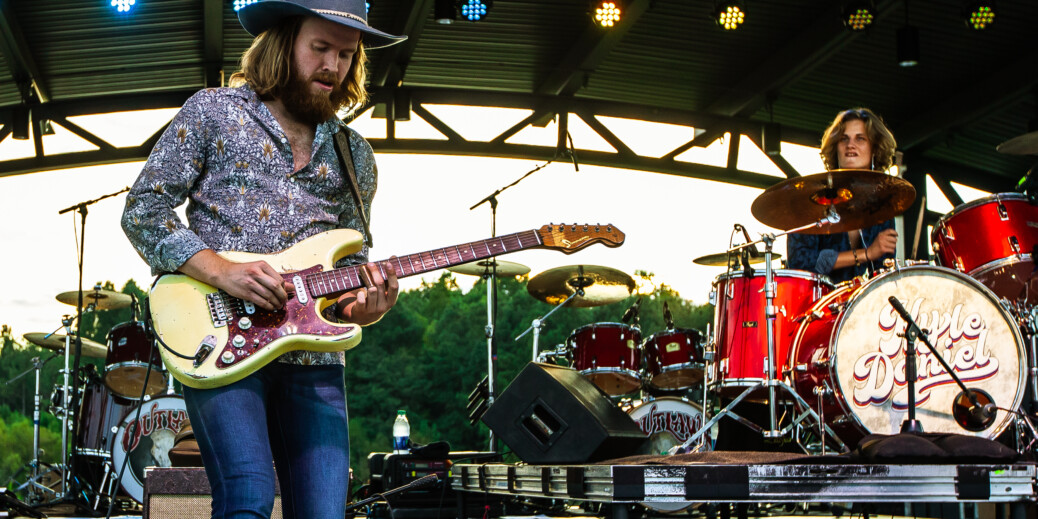 When last we chatted with Swedish guitarist David Henriksson, he was on tour with country star Tracy Lawrence.

These days, he’s touring with up-and-coming country star Kyle Daniel – and he’s sharing the stage with a fellow Swede to boot. Playing drums for Kyle Daniel’s band is Karl-Johan Wigander, who came to the United States a couple years ago when he was 18 to study music

“It’s kind of unexpected, I must say, especially because it’s two Swedes who didn’t know each other,” Henriksson said of the odds of two Swedes on tour with a country music star. “It’s unexpected for sure. We try not to speak too much Swedish on the road out of respect to the other guys.”

Henriksson met Daniel when he was visiting Nashville in 2014, and the pair became friends and talked about playing together. Shortly after arriving in Nashville, Henriksson scored a gig playing lead guitar for Lawrence and enjoyed playing all over the United States the past few years. (We caught up with Henriksson in Nashville for this sound check.)

Last year, Daniel suggested 2019 could be a busy year – in April 2018, Rolling Stone tabbed Daniel as one of the “10 new country artists you need to know” – and asked Henriksson if he’d be interested in joining the tour. Henriksson said he spent all of last fall wondering if he had the guts to leave a steady gig with a legacy artist to start a tour with a guy on the rise.

“It was a nice transition for sure,” he said. “And I’m still on very good terms with everyone in Tracy’s camp.”

Wigander, 20, came to the States to study drum performance at the Berklee College of Music in Boston. He then went to study at the Musicians Institute in Los Angeles for a year.

“Basically, I wanted to be touring and doing sessions and stuff,” Wigander said. “I wanted to play with artists and record with them.”

He visited friends in Nashville late in 2018, and mutual friends connected him with Henriksson. He also happened to meet Daniel on the same trip.

Little did he know at the time that he would return for a visit in February and decide to move to Nashville in July. Soon after, he was recruited to play drums for Daniel.

“I just went there on a trip with my buddy,” Wigander said of visiting Nashville, adding that the odds were very small that he’d meet Henriksson and Daniel and ultimately join them on tour.

While touring with Daniel has presented the two Swedes a cool opportunity to play with a rising star, both have their sights set on 2020. That’s because both of their visas expire in February, and they continue to work each day collecting the necessary documentation to extend their stay in the United States.

“Even though I’ve lived here for two years, it’s still a tricky process with no guarantees of getting a visa,” he said. “Of course, it’s nerve-wracking in a way. I can’t know how long I can plan for being here. It’s tricky to make big decisions when I don’t know if I’m going to be allowed to stay here.”

It’s like a part-time job for Wigander, who said he spends an hour or two every day, or about 10 hours a week, emailing and calling people to assist him in getting the necessary documentation.

“It’s kind of frustrating because you have to gather so much information about stuff you don’t really have,” he said. “You have to get all that done before the visa expires. I wouldn’t say I’m very stressed, but I’m stressed.”

Until then, they’ll continue a tour that will take them throughout the Southeast in October and across the country for a dozen more dates in November.

And they’ll start the New Year as one of the performers on Delbert McClinton’s sold-out Sandy Beaches cruise.