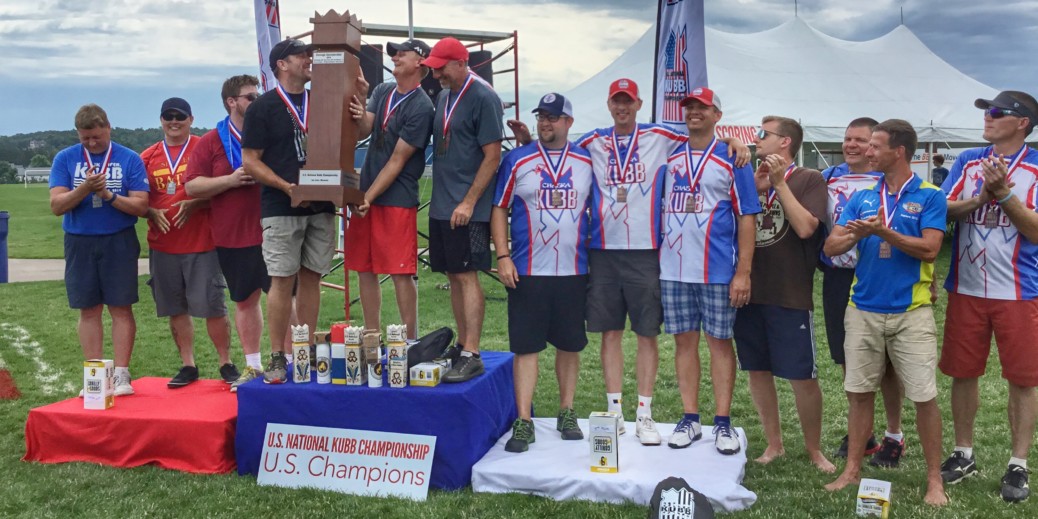 With this year’s championship coming up (July 13-15), we checked in with Anderson to get an update on the growth of the tournament and what to expect at this year’s tournament.

Another U.S. National Kubb Championship is right around the corner. How is this year’s tournament shaping up?

Planning is going really well. Our board and volunteers are extremely busy getting things ready, but it is worth all the work. We are adding a couple additional things to the Championship this year. One of them is the Top Big Team award. We know there are a lot of teams that have five or more players (many of them family teams), so we are going to start giving out an award for the Top Big Team this year for the team that has the best finish and has five or more players. In addition, we are going to have a Best Tent award. So many teams are bringing team/club flags, banners, signs, etc., for their tent. Last year, two local kid teams even brought a little pool and filled it up with water. The tent game is getting stronger every year, and that is a great part of the Championship.

While the tournament has grown to 128 teams, you said after last year’s event that there’s also been an improvement in terms of the quality of play. What do you attribute that to?

I think a lot of that has to do with more leagues forming. For example, the Eau Claire Kubb League is now four years old and has a spring, fall and then an indoor sand league in the winter. The Saint Paul Kubb Society and Minnesota Kubb both in the Twin Cities are huge and are extremely active. Others like the Kubb Life league in the Milwaukee area and a league in Appleton are also growing leagues. These leagues provide opportunities for people to get better, but just as important for people to get out of the house, play kubb and meet new people. However, it is important to note that all tournaments, even the U.S. Championship, are open to all skill levels and experience. A huge percentage of the teams that attend the U.S. Championship are not aiming to be one of the top 16 teams to make it to Sunday.

Can you give us a snapshot of this year’s field? Where are most of the teams from? Who’s coming from the furthest away? Etc.

Right now, we have roughly 50 percent of the teams from the Eau Claire area. The next largest percentage is teams from the Twin Cities. So far, teams are travelling from Wisconsin, Minnesota, Ohio, Colorado, Illinois, South Dakota, Pennsylvania, Michigan and Connecticut. We also have a past world champion from Germany that is returning after attending last year and a player from Thailand is signed up. We have numerous first-time teams signed up. We have a local team of 80-plus-year-old men that will be playing for their sixth time and a new four-person local team of 10-year-old girls playing for their first time. I am hoping these two teams get placed in the same Saturday morning group and play against each other. That is what kubb is all about.

Could you have imagined the event getting this big when you and Erin started it?

Never. In addition, I could have never imagined kubb taking over Eau Claire like it has. This week, we went to a middle school in Eau Claire to play kubb with three eighth grade P.E. classes.  Only 10-15 percent of the students we met did not know about kubb, and roughly half had played. I have been told that Eau Claire has to be the closest to Sweden when it comes to the percentage of people knowing about kubb and percentage of people that have played kubb.

What do you envision the event looking like five years from now?

That is a tough question. We know we want to continue a balance of having an amazing event for both the most competitive of teams and the most recreational of teams. We feel like we have done a great job of that since we started in 2007. That will continue to be one of our main focuses.

For our readers who are unfamiliar with kubb, what would you like to say to them to encourage them to start playing the game?

First, it is incredibly simple to learn. It takes 10 minutes to learn the game and then you get a lifetime of enjoyment. Second, it is for everyone. One of the top teams in Eau Claire and actually in the nation is a three-generation team named El Ringers (you can find them on Facebook). Not many games can grandparents play with their children and their grandchildren. Third, the World Championship has a saying, “Kubb unites people and creates peace on Earth.” Since day one, we have believed in that saying as well, and that plays a big role in what we try to do as an organization, how we have developed the U.S. Championship, and how we introduce kubb to people in Eau Claire and outside of Eau Claire.

Lastly, back to the middle school event earlier this week. As is common when doing outreach with kids, a couple of the students were not too interested in learning kubb. You could see it on their face and body language. As is common as well, after our introduction of the rules and them playing for 10 minutes, they could not stop smiling and laughing. And not only did they not turn down the free stickers we were handing out, they wanted more than one. Kubb = smiles.

Where can people get more information and learn how to play?