Kent Ullberg: The Swedish Sculptor Known All Over The World 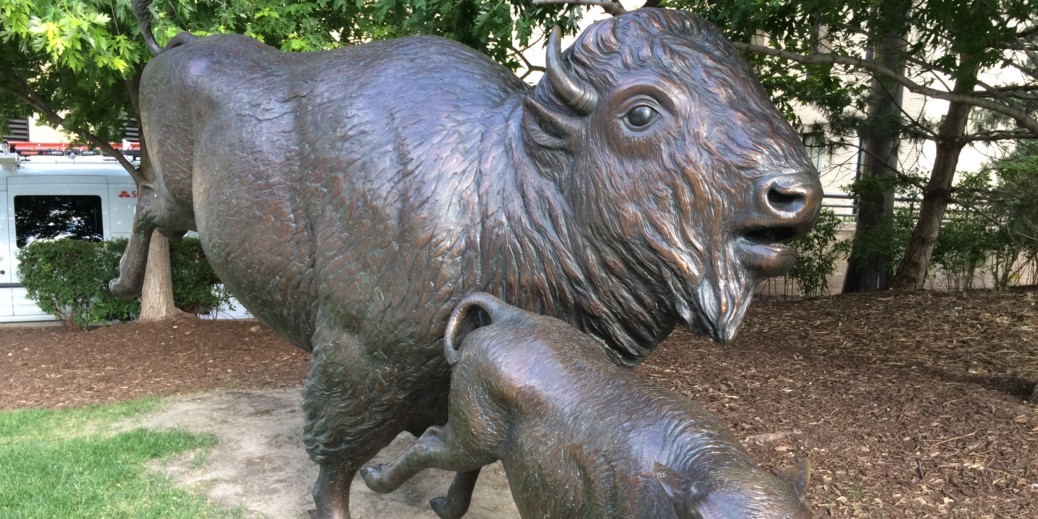 Kent Ullberg: The Swedish Sculptor Known All Over The World

In the midst of the financial district in downtown Omaha, nature abounds.

There, at the intersection of 16th and Dodge streets, Canadian geese are startled by rampaging bison and take flight, leaving their sanctuary in the water for the safety of Omaha’s sky. Nearby, bison and geese are intrinsic with their city surroundings, blending in with buildings, light posts and seemingly anything that gets in their way.

It’s all part of one of the largest bronze and stainless-steel art installations in the world.

And it’s one of the best examples of the genius of Kent Ullberg, an American citizen who was born and raised in Sweden and is recognized as one of the world’s greatest wildlife sculptors.

“I want to celebrate nature,” Ullberg said from his home in Padre Island near Corpus Christi, Texas. “That is my passion.”

Ullberg’s passion can be seen all over the world, from Denver and Philadelphia to Fort Lauderdale and Corpus Christi, from Stockholm to Luxembourg to Cape Town.

In all, Ullberg has created more than 100 pieces of public art around the world and been honored with countless awards, including the Rungius Medal, the highest honor from the National Museum of Wildlife Art, in 1996, and two years later, the Prix de West Award, a leading recognition for Western art. His peers at the National Academy in New York City elected him a full Academician in 1990, when he became the first wildlife artist since John James Audubon to receive one of the greatest tributes in American art.

The giant ram outside the University of North Carolina’s football stadium, the magnificentshark breaking through bricks in the ground and 17-foot soaring Mako shark on two of NOVA Southeastern University campuses in Florida and the gigantic mastodon at the Denver Museum of Nature and Science all are Ullberg creations. So, too, is the soaring sailfish – shown in three stages of ascension – outside the Broward County Convention Center in Fort Lauderdale.

Name a creature by land, water or air, and Ullberg likely has sculpted it in a career that has spanned four decades.

“I haven’t sculpted any rats yet,” he said, laughing when asked if there’s any animal he hasn’t done. “But I have sculpted squirrels and rabbits.”

Nature always has been a part of Ullberg.

Born in 1945 in Grundsund, a fishing village on Sweden’s West Coast, Ullberg grew up in Gothenburg. His father was a seafarer and a musician, playing classical and dance music on the accordion. He also was an artist and plein air painter, one who draws and paints outdoors rather than inside a studio. His mother was in art school and was working as a waitress during the summer when she met her future husband when his band played where she was working.

“I’ve got both the sea and art in my DNA,” Ullberg said. “First of all, my passion was nature, growing up on the seacoast watching birds and fish.”

Ullberg remembers being 12 when he saw American naturalist and ornithologist Roger Peterson’s “A Field Guide to the Birds of Britain and Europe” for the first time.

The pictures of exotic birds from all over Europe made an impact on the budding Swedish artist: He began to dream of where his artistic talents could take him.

Included in its plans for a new headquarters, First National Bank of Omaha designated parcels of green space near its Omaha home.

As Ullberg remembers, there were 20 finalists for what would become two projects: one to celebrate the pioneers and their westward migration, the other to showcase the nature they encountered on the way.

Friends of his earned the right to depict the westward migration. Ullberg said he “went through great effort” to be selected to capture the natural beauty of Nebraska. He created a scale model and three-dimensional studies of the geese and the concept, and he consulted with a landscape architect to win the opportunity.

His proposal was to produce a herd of bison disturbed by the wagon train. The herd in turn run through the park and disturb the Canadian geese.

“The Spirit of Nebraska’s Wilderness” was born.

Tradition in Ullberg’s family is that you went to sea when you finished high school.

“Right out of high school, in fact, I think one week after graduation, I was on a ship to South America as a deck hand,” he said.

When he was 18, he began his studies at the Swedish Konstfack School of Art in Stockholm. He followed in his father’s footsteps, by enrolling in painting. His mother, however, may have had a bigger influence on his art.

“I found my passion when I got my hands in the clay,” Ullberg said. “It was a done deal. I fell in love with sculpture.”

It was only when his mother passed away years later that he found her diaries, where she wrote of studying sculpture when she became pregnant with Ullberg.

“I realized it, unbeknownst to me, sculpture probably came from my mom,” said Ullberg, who will celebrate 40 years of marriage next year and is a grandfather himself.

When he was just a baby, Ullberg’s mother created a sculpture of his right hand, a piece he found after she passed away and keeps with him today.

Another influence was Björn Wennerberg, who was chief taxidermist at the national arts museum in Stockholm and a very good sculptor.

“I would spend a lot of time around him,” Ullberg said. “He must have seen something in me.”

When a position at the museum for a taxidermist assistant became available, Wennerberg’s influence helped Ullberg get the job. Modern taxidermy, according to Ullberg, isn’t just stuffing: You create the sculpture of the animal and glue the skin to it.

For “The Spirit of Nebraska’s Wilderness” in Omaha, Ullberg labored for about 10 years. The project included architecture, engineering and working hand in hand with the city.

A total of 58 geese, larger than life and some with 8-foot wingspans, and nine bison, the largest of which are imposing at 8 feet tall and more than 1,400 pounds, comprise the installation, which is a couple blocks from the westward migration “Pioneer Courage.”

Outside the park, geese can be seen attached to buildings and light poles. Bison become part of the architecture of buildings. Omaha’s downtown is interrupted by nature.

Ullberg continued to sculpt nature, even though his mentors suggested that abstract expressionism was far more in fashion in the 1960s than realism.

He drew inspiration from Carl Milles, one of Sweden’s most famous sculptors who donated his residence and workspace known as Millesgården to the Swedish people.

“As a young man, when I was told I couldn’t do realism, I would go to Millesgården and dream,” Ullberg said. “I sat there and dreamt, maybe if he could do it, I can, too.”

In the meantime, he studied museum curation in Germany, which led to an opportunity to help start the national museum and art gallery in Botswana. He spent seven years there helping build a museum, leading safaris and sculpting as much as time allowed.

While there, members from the Denver Museum of Nature & Science visited.

“They came to collect animals, and I was their host,” Ullberg said. “We spent months together in the field with the Americans. As a thank-you, they sent me a ticket to visit Denver.”

Denver was Ullberg’s introduction to America. The Rocky Mountains. Cowboy bars in the mountains. He fell in love.

“In Denver, I met sculptors who were making a living doing realistic sculptures,” said Ullberg, who maintains a studio in Loveland, Colo.

Ullberg accepted an offer to stay in Denver and build the museum’s African exhibit. After two years, in 1976, he traded his job to pursue a career as a sculptor.

“America gave me the opportunity to live my dream, and I am so damn grateful,” Ullberg said.

The Omaha project is considered to be one of Ullberg’s finest. It also serves as a grandexample of his passion of celebrating nature.

“To try to see nature through my eyes and how worthy it is and take care of it,” Ullberg said of his goal for his art. “I definitely think nature’s images, it’s the language of our time.”

Nature has taken Ullberg around the world and forged a career that has come full circle.

When he was at an art show in New York in his 20s, he met Roger Peterson, hailed as “probably the best-known ornithologist of the 20th century” by The New York Times in his obituary. Ullberg shared with Peterson that he had his book and told him the influence it had on his life.

“Here walks the real man, and we become lifelong friends,” said Ullberg, who hosted Peterson at his Padre Island home and shared other birding excursions. “He was very important to me.”

In honor of Peterson, Ullberg sculpted “King and Heir,” a male penguin and his chick, which stands at the Mystic Aquarium in Mystic, Conn.

Back in Stockholm, Millesgården is hosting an exhibition that features the work of Ullberg and Lars Jonsson, a nature painter. The ambassador to Botswana was among those on hand to celebrate with Ullberg for the exhibit, which runs through Oct. 8.

In 2014, 40 years after arriving in Denver to lead the development of its African exhibit, Ullberg unveiled “Snowmastodon,” a relative to the elephant that at nearly 20 feet tall and more than 5,000 pounds is the largest mammal he’s ever created.

“Coming to America was the greatest thing that ever happened to me,” Ullberg said. “I’m living my dream.”