Jenny Lind: The Swedish Opera Star Who Inspired A Small California Mining Outpost To Rename Itself

Jenny Lind: The Swedish Opera Star Who Inspired A Small California Mining Outpost To Rename Itself

There’s a century-old mystery on the north bank of the Calaveras River in Central California, one with a curious Swedish connection that may never be solved.

A 40-minute drive from Stockton on State Highway 26 lies an old mining town whose roots trace to the onset of the Gold Rush. Initially dubbed Dry Diggins, the settlement served as early as 1849 a weigh station for mule teams and freighters seeking to extract their share of fortune from the California hills north of the river.

By the early 1850s, having apparently undergone a bit of an identity crisis, Dry Diggins brushed the mining dust off its name and emerged as Jenny Lind, Calif. – as in the Jenny Lind, the “Swedish Nightingale” who, coincidentally or not, was making her triumphant tour in the United States under the watchful eye of one of history’s great promotors, the legendary P.T. Barnum.

The peculiar rechristening of a hardscrabble town at the foothills of the Sierra Nevada mountains – oh, some 5,200 miles away from Sweden – offers way more questions than answers. Was the renaming to celebrate a visit to the town by the beloved opera singer? Could it have been an obsequious attempt to flatter her into a westward swing on her national tour? Perhaps Jenny’s Dry Diggins fan club got a bit carried away, and in a civic display of idolatry, bestowed an honor on her that even President Millard Fillmore fell short of deserving. 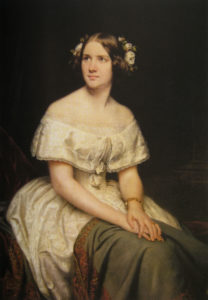 Alas, the facts are elusive, although the Calaveras Heritage Council offers a few possibilities. One theory suggests that the town actually was named for pioneer Dr. John Y. Lind, and the name subsequently morphed into the more famous namesake over time. Another story supposes that the tribute to Jenny Lind was more of an ironic gesture, that the braying of the mules was the Dry Diggins version of fine opera, making it only appropriate to give the town such as a celebrated and refined musical moniker.

Most likely, Jenny Lind, California was a result of “Lindomania,” as it was called, that was sweeping the country at the time. When she arrived in the United States in 1850, having already earned celebrity status across Europe, some 40,000 fans met her ship at the New York harbor. Tickets were at such a premium that Barnum sold them by auction, and by the end of the year, her 93 concerts had earned her $350,000, a colossal sum at the time (equivalent to more than $10 million today), which she donated to endow free schools in Sweden.

Lind’s tour never made it as far west as California, so she never visited the town that bears her name. Today, the town is no longer incorporated, and its last post office closed in 1951. There is no Jenny Lind museum or other attraction to connect her life to the town. In fact, there are apparently no Swedish ties to the town at all (instead, by the mid-19th century, half the town’s population were immigrant Chinese laborers).

And yet, there are enduring legacies to her name. Highway J14 becomes Jenny Lind Road for a mile or so before it turns into Milton Road at the fork with Main Street. The Historic Jenny Lind Bridge stands proudly over the Calaveras River, and nearby, local schools bear the name Jenny Lind Elementary and Jenny Lind High School, although they are in nearby Valley Springs, Calif.

Across the United States, there also are plenty of streets named after Jenny Lind, and there’s an elementary school named after her in Minneapolis. In North Truro, Mass., on Cape Cod, there’s the Jenny Lind Tower, a tower that was moved from Boston. As legend has it, the tower was named for the opera singer who sang from atop the tower to those who couldn’t get into one of her concerts.

The Jenny Lind name also lives on today as a style of furniture for bed and cribs.

No recordings of Jenny Lind’s renowned voice exist. What she sounded like forever will be a mystery – so, too, the mystery of why a tiny, nondescript mining town in California’s eastern foothills would name itself after the most celebrated artist in the world.