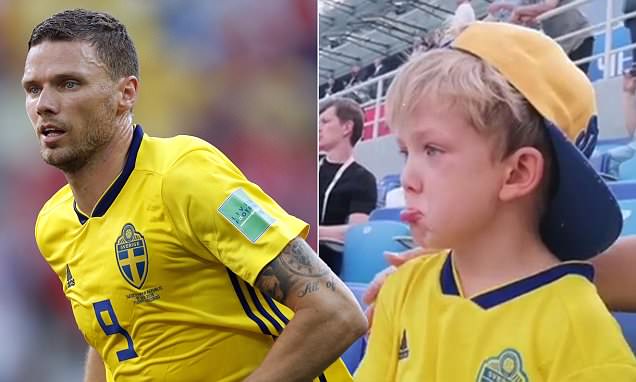 Sweden’s fans have experienced a roller coaster of emotions during the 2018 World Cup with an exciting 1-0 win against South Korea followed by defeat against Germany, and an all-time high with the very recent 3-0 win against Mexico, advancing them to the knockout round. But, one Swedish fan in particular had the best moment when his dad made his World Cup debut.

Daily Mail shared this video of striker Marcus Berg’s four-year-old son shedding a few tears when his dad entered the field, and it captured our hearts.

Leading up to Sweden’s victory over Mexico in the World Cup, Volvo Cars launched a two-page ad showcasing its partnership with the Swedish Football Association that combines headlights of the Volvo V60 and a stadium to create an image resembling Thor’s Hammer.

“The mood of the ad is very much in line of the mood of the Swedish football fans leading up to this very important game,” said Karl Risenfors, art director at Forsman & Bodenfors .

New Yorkers know how to throw a Midsummer celebration

Last weekend, New Yorkers celebrated midsummer during Battery Park City’s annual festival, the largest Midsummer celebration in the world outside of Sweden. The New York Times shared a visual recap of the day-long event complete with photos and videos of flower crowns, dances around the maypole, Swedish flags and more.

Voted the most beautiful archipelago in the world by CNN, Fjällbacka offers tourists exceptional views, hiking, golfing, fresh and indulgent seafood and so much more. Forbes shared highlights about the Swedish islands, including a tidbit about a best-selling author who grew up there, earlier this week.

Sweden’s recycling game is so strong, the country has been importing trash from other countries to keep its recycling plants running. And efforts don’t stop there. Several Swedish businesses have launched to help make recycling for consumers easier. Nordic Business Insider highlights six startups six startups that aim to help solve waste of all kinds from food and trash to unwanted furniture.