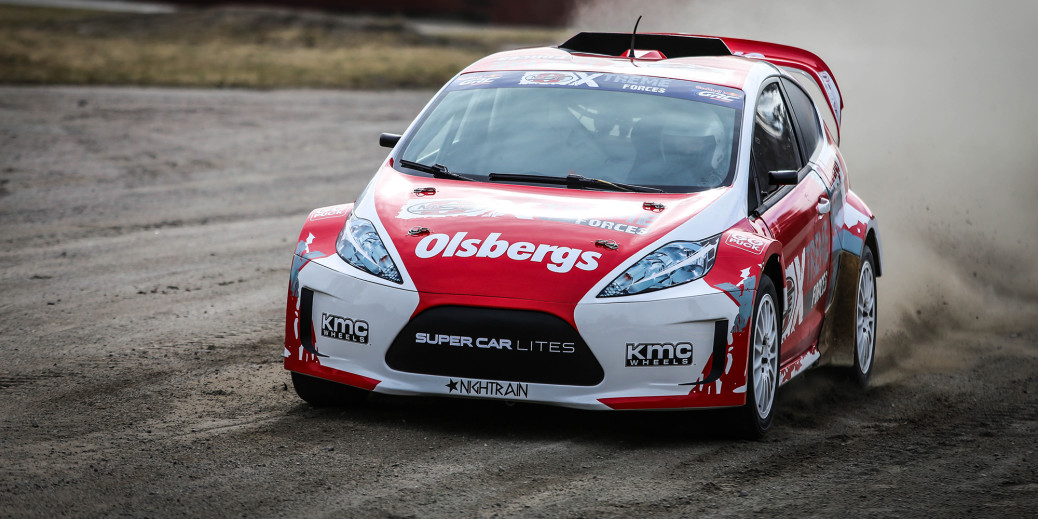 First, it was on skis. These days, it’s racing cars all over the world, including her debut in the United States last November.

That’s when Hultgren, 23 and from Charlottenberg, Sweden, became the first non-North American woman to compete in the Red Bull Global Rallycross – Rallycross is a form of auto racing that’s held on mixed-surface tracks; the cars are modified or specially built cars, like Subarus or Volkswagens.

Hultgren slowed down to chat with us about her first trip to the United States and plans for 2016.

You grew up playing lots of sports before skiing and racing cars took precedence. What did you like about skiing? And what attracted you to racing cars?

Yes, that’s true. Well skiing was actually my big sister who got me into it; she was an alpine skier, and I had almost never ever been in the slopes before the age of 10. But what attracted me the most was the sound from the slalom poles hitting the ground: That sound makes my skin rise still. My mother and father were rally drivers when they were young so the interest of cars has always been there. But when I turned 15, a friend of mine introduced me to a smaller class of Rallycross called folkrace. It’s a car that costs $650 that we drive just the same as Rallycross but meant to hold the costs down for all of the drivers. So I guess it was the smell of gasoline, the vibrations from the engines and the adrenalin of having total control of the car both sideways and straight.

Recently, after having success in both sports, you decided to give up skiing. How difficult was that?

It was an easy choice since Andreas Eriksson called me and asked if I was interested in driving Super Car Lites for him in the Swedish nationals, and I was dreaming of driving a 4-wheel-drive car since I started driving cars. This is not something that is very usual back home since the high cost is a big problem for private drivers. So to be asked to join the world’s largest Rallycross team, that was not a problem to say yes to. Of course I had to put the skiing behind, and a lot of time and practice was thrown away at that point; I got really good at skiing in the last years. But, I have never had any regrets. In America, we’re used to NASCAR and Indy Car more than other disciplines. Describe the kind of cars and style of racing you compete in.

Rallycross is a very explosive kind of sport. We are from 6 to 10 cars on the start grid, and we all release the clutch at the same time as the light turns green. At this point, we are 10 drivers fighting to get first out of the first corner to be able to drive the best lines on the track. The track is built for each race and contains both tarmac and gravel. It also has a Joker Lap (short cut), which is a part of the track that all drivers have to pass one time each. We drive two qualifying heats and one Last Chance Qualifying (LCQ) for those who didn’t qualify directly to the finals, plus the final.

You accomplished one of your personal goals when you raced in America in November. What was it like to race in Las Vegas and visit the United States for the first time?

It was a dream come true; I have been dreaming of driving in the States for the last two years. So when Andreas gave me this opportunity, I couldn’t say anything but YES! Unfortunately, the race didn’t turn out the way I hoped it would, so for next time I will come back stronger. It was my very first time in the U.S., and I loved it from the very first hello till its last goodbye. Americans seem to me like a very friendly type of persons and helpful and a good sense of humor. I loved to see how all of you worked with the teams in the paddock, how unlikely large everything is.

What does it mean to you to be the first non-North American woman to start a race in America in the Red Bull Global Rallycross?

I haven’t really thought about it that way but of course it’s quite amazing to hear that I was the very first non-American Woman to drive the GRC! I have pinched my arm both once and again this past year. There aren’t a ton of women in motorsports. What is it like competing against men from around the world?

No, there aren’t that many women in this sport, and to me I can’t understand why. I couldn’t find a sport that is more equal for both men and woman. We all have the very same conditions, one clutch, one brake, one throttle and a steering wheel. But it might feel this way since I always have been competing with the guys in my hometown. I played soccer with boys from 6 years up till 11, ice hockey and anything else I could compete in. So for me, it just feels like I should.

Who are some of your racing inspirations?

Racing inspirations, I would say that Sebastien Loeb is the greatest driver today, showing skills while driving anything with four wheels.

What does 2016 present in terms of racing in the United States?

In 2016, I am driving the whole GRC Red Bull Series. We are all working hard to make this happen. Hopefully, I will be in the States for the whole season.

Racing is a lifestyle that means you commit your whole life in to the sport, putting in the hardest work of yours to be the best you possible can.