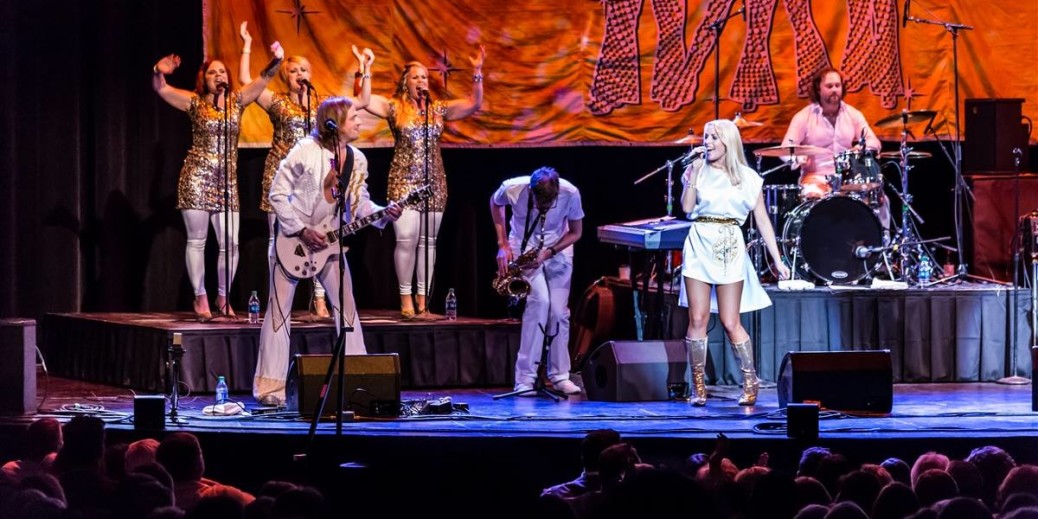 ABBA’s “Dancing Queen” hit the airwaves in the summer of 1975, catapulting Agnetha Fältskog, Björn Ulvaeus, Benny Andersson, and Anni-Frid Lyngstad to international fame. The group became one of the most commercially successful pop acts music history with more than 10 million records sold in the United States and an estimated 350 million worldwide – ABBA was inducted into the Rock and Roll Hall of Fame in 2010.

Although ABBA left the music scene in 1982, its music lives on thanks to one of the world’s most popular and bestselling tribute bands, Arrival from Sweden.

Started by Gothenburg-born Victoria Norback, Arrival from Sweden has toured for more than 21 years and visited nearly 50 countries. Think of it this way: the tribute band has likely performed more shows than the original.

Norback played in various bands in Gothenburg in her early 20s. People constantly mentioned her resemblance to ABBA’s Anni-Frid. The comments stuck, leading her to form Arrival from Sweden in 1995. Norback set out to create an experience for ABBA fans. She handpicked singers and musicians through a competitive audition process in Sweden, and exact replicas of original ABBA costumes were created.

“ABBA is so perfect,” Norback said. “You need to have the best singers and musicians. If you do ABBA, you have to do it well.”

As a teen, Norback enrolled in music school and learned how to sing pop music. Her mother, an opera singer, also taught her vocal tricks. She used that training to learn Anni-Frid’s unique vocal style, which Norback describes as “belting and twang.” Norback even practiced how ABBA breathed and how they pronounced every word.

“You have to do it like ABBA did it,” she explained.

Norback and other members don’t pretend to be ABBA while on stage. Instead, they tell stories about the band and Sweden between songs to educate the audience.

“We keep ABBA’s legacy going on,” Norback said. “It’s like we’re ambassadors for Sweden and ABBA. Everyone is very interested in learning about Sweden.” Mamma Mia!, the long-running musical, gets credit for exposing new generations to ABBA’s music, according to Norback.

“The show includes people from 2 to 100,” Norback said. “The musical and movie have introduced new people to ABBA. It’s really a family show.”

Arrival’s fan base includes a very important person as well.

Andersson, one of the four original ABBA members, gave Arrival a song called “Just A Notion” about a year ago. Arrival plans to record and release it for ABBA’s 45th anniversary in 2017.

“Benny said when you release, it’s not an ABBA song it’s an Arrival song,” Norback said. More than two decades later, Arrival continues to perform at sold-out venues across the globe. The band has even played in countries some might not expect to be ABBA fans, including India and Myanmar.

“Music connects people all over the world,” Norback said. “Some people don’t even know the English language, but they know all the songs.”

Norback considers the United States her second home and loves when the band does American tours – especially during Sweden’s cold and dark winters. She loves New Mexico, Arizona and California because of the scenery.

Want to check out Arrival for yourself? Upcoming tour dates are available here.