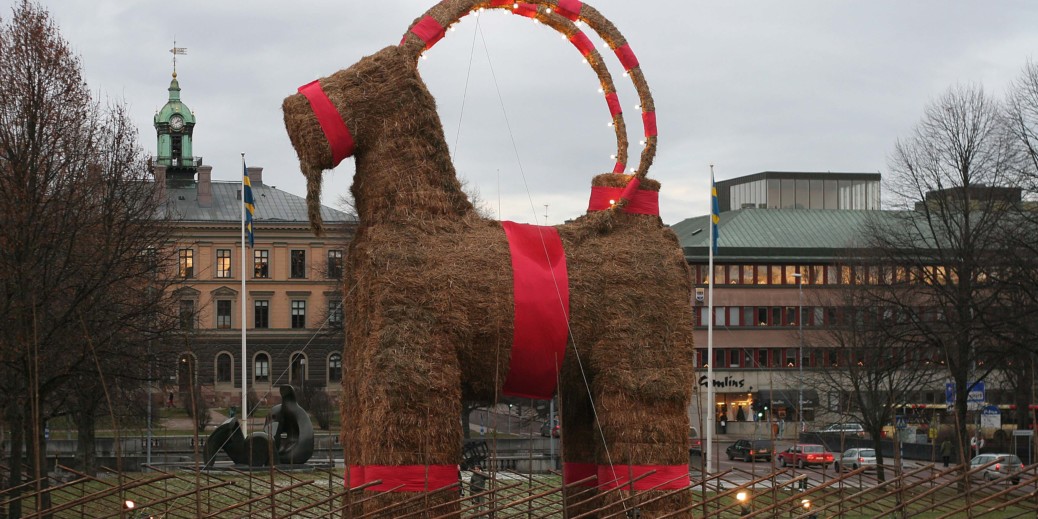 While many Americans admire large Christmas trees in town squares and other public spaces, Swedes enjoy a rather peculiar holiday tradition: the 42-foot-high Gävle Goat.

A popular Scandinavian Christmas symbol, yule goats date back centuries. In 1966, advertising executive Stig Gavlén came up with the idea to design a giant version of the goat in Gävle, Sweden to attract customers to shops and restaurants.

Fifty years later, the Gävle Goat, which is made of straw, continues to be a beloved holiday spectacle for Swedish families and across the world.

To understand just how large of an undertaking the Guinness Book of Records-winning goat really is, the project’s spokesperson, Maria Wallberg, shared these numbers for Umgås readers:

The goat also has a fiery history. Over the years, vandals have managed to demolish, steal, burn and crash vehicles into the goat. Destroying the straw figure has become a tradition in itself, with town officials putting up extra security measures for the Gävle Goat’s 50th anniversary.

Wallberg explained a recent incident involving an American tourist via email: “He was visiting some friends in Gävle. They went out for a couple of drinks, and on the way home, they passed the Gävle Goat. His Swedish friends told him of the tradition of the burning goat. So he picked up his lighter and set the goat on fire.”

Wallberg said the man was arrested for arson but returned to the United States before going to trial.

Barring any visiting arsonists, the Gävle Goat will be on display Sunday, Nov. 27, through the New Year. Viewers can keep an eye on the goat from afar with the goat’s webcam:  www.visitgavle.se/gavlebocken.