One of our favorite Swedish Christmas traditions is back: the Gävle Goat.

If you’re not familiar with the Gävle Goat (or Gävlebocken), here’s a quick refresher: Each year, a 42-foot high goat made of straw is constructed and attracts Swedes from far and wide by the thousands to the town of Gävle; unfortunately, the goat also attracts its fair share of arsonists (and other destructionists) who try to carry on a different tradition of burning or destroying the goat.

Last year, the Gävle Goat survived the entire holiday season, one short year after it lasted less than 24 hours on its 50th anniversary before someone burned it to the ground. According to National Geographic, since the tradition started in 1966, the goat has seen the New Year only 26 times.

This year’s Gävle Goat was unveiled on Sunday, Dec. 2 and drew thousands of fans to the festivities.

We checked in with project spokesperson Maria Wallberg for an update on one of the world’s most famous goats.

SPA DAY! ‍♂️ I have the best crew pampering me. Watch all the treatments on https://t.co/m5P2ROxlDV #gävlebocken #webcam #bestcrew #spaday pic.twitter.com/oCZTbptqwT 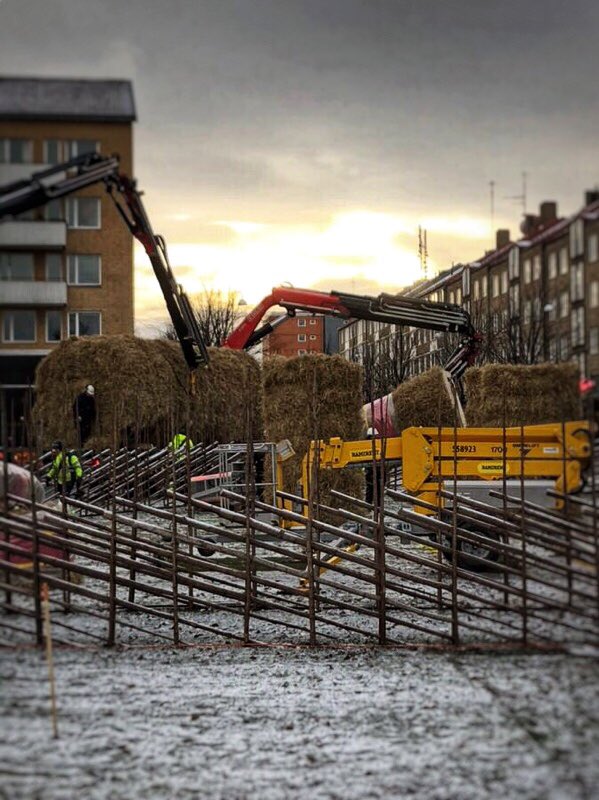 You had said there was a “secret plan” to keep the goat safe last year… Is it the same plan this year, or do you have a new plan?

We develop new things every year. Of course, we can never feel 100 percent secure, but we do everything in our power to keep the Gävle Goat safe over Christmas and the New Year. Then we’ll carefully put him down on the 2nd of January and use the skeleton of wood for next year.

When does planning for the celebration each year actually start?

We start in March the same year for the inauguration with a small summer break for our vacations. The inauguration is one of the things our Christmas project called “Christmas starts in Gävle” works with.

From start to finish, about how many people are involved from construction to protection.

For construction, it’s six people involved from August until the day for the inauguration. I can’t tell you how many people are involved with protecting. That’s classified information.

Picture perfect This is what 1000 hours of hard work looks like. (And 1600 meters of rope, 56 five metre straw mats and 1,200 metres of Swedish pine – but who’s counting? ) #gävlebocken #bestcrew #goatfact pic.twitter.com/D2ciONzCNx

You’ve told us before, but can you describe the impact that the goat has on the people of Gavle? And on the businesses?

The Gävle Goat is an amazing symbol for the city and a travel reason to visit Gävle. It’s great for the tourist economy and city business. That’s also a strong reason why we wish him to stay during the whole season: so his fans can visit and enjoy this world-famous Christmas goat over Christmas and New Year and spend money in our city. It’s also important to remind everyone that it’s a criminal act to attack the Gävle Goat. In the last years, two young men got caught, and they had to pay a fine of the cost to build the Gavle Goat.

How many people do you envision visiting the goat this year?

Last year there were 2.4 million tweet views. In 2016, the Gävle Goat trended on Twitter. Every year about 120,000 people in 120 countries watch him on his live cam: www.visitgavle.se/gavlebocken.