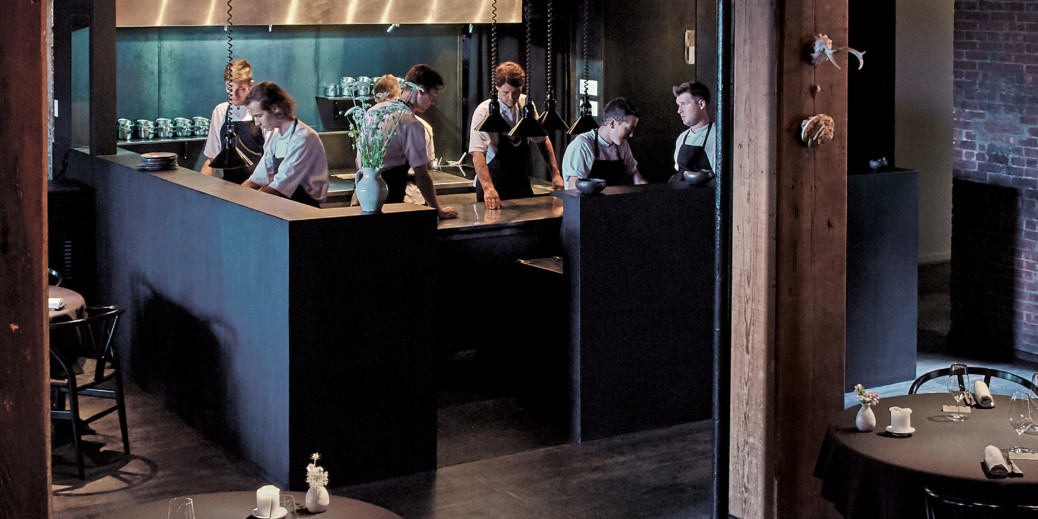 In 2014, Fredrik Berselius made a decision with cosmic ripple effects beyond his Williamsburg neighborhood of Brooklyn. The acclaimed Swedish-born chef closed his restaurant Aska – drawing the name from the Swedish word for ashes – after being open for a year and a half.

But what a year and a half it was: Berselius earned a Michelin Guide star, and Aska was named among Bon Appetit’s 10 Best New Restaurants.

Having outgrown the restaurant’s original site, Berselius planned to reopen a new Aska quickly in a bigger space, but one delay after another meant two years passed before the doors opened. That “bigger space” delivered only 10 coveted tables, though the two-level space includes an intimate garden and cellar for enjoying a beverage. He’s still at home in Williamsburg.

Berselius earned a name for himself for taking risks on the plate, further taking advantage of seasonal produce and even obscure ingredients – such as burnt leaf vinegar, reindeer lichen and cured flounder roe sacs. As Pete Wells, dining critic of The New York Times, declared in a three-star review of a 20-plus-course dinner at Aska: “Mr. Berselius is the rare chef who thinks like an artist and gets away with it.”

For many chefs, a long hiatus – during which Berselius obsessed over finding and designing the ideal new venue – would have been disastrous, as diners (especially in the high-profile New York City scene where a new hot spot erupts sometimes daily) often have fickle minds. But within six months of reopening, Aska had secured its rise from the virtual ashes to earn a second Michelin star, the only new restaurant to receive that honor that year and one of just 10 New York outposts to hold two stars, which in the food world are akin to Oscars in the film industry.

Indeed, Michelin’s latest review gushes about the experience: “This is new Nordic cuisine that celebrates man’s relationship with nature and the changing seasons. It’s clever without being self-congratulatory, original without being gimmicky, and complex without being complicated – a kitchen shimmering with intelligence.”

And now, Berselius is giving both those who have scored a table – he talks in the opening about serving a couple from Australia – and those who might have a trip on their bucket list direct insight into his style with the recent publication of Aska. His inaugural cookbook, which hit bookshelves and kitchen counters in late May, showcases everything that defines the restaurant. “Though I missed elements of Sweden, I soon realized that cooking gave me a way of creative expression that allowed me to remain connected with where I was from,” Berselius writes in introducing another 220 pages of exquisite images matched by his insightful prose discussing the recipes and experience. “I drew on my own collection of experiences and memories of having grown up in that region – memories of specific flavors, places and things, but also more generally, of feelings and emotions associated with them.”

In many cases, big-name chefs with big-name restaurants produce sweeping cookbooks destined more to adorn coffee tables rather than to be propped open next to the home stove, where grease-spattered or herb-dusted pages serve as honor badges for attempts at recreating some of the world’s best dishes. Berselius beckons readers to cook with him, bringing in their own twists to tailor a recipe, and encourages those perhaps less emboldened by their cooking skills to try their hand at pantry holdings, such as seasoned vinegars or infused oils – using readily accessible ingredients.

Within the black cloth covers of this book is a sweeping story of a different kind, walking through Berselius’ inspirations of growing up in Sweden, finding his passion in Brooklyn, and how Upstate New York provides the source for many ingredients that hint at his Scandinavian upbringing.

While on the road for his recent book tour, which included stops across Europe, Berselius took time to speak with Umgås about this deeply intimate project, his cooking and his love of rutabagas.

We’ll start with your formative years growing in Stockholm. Do you remember a pivotal moment that brought you to the kitchen and convinced you to pursue the life of a chef?

Growing up, I never actually considered becoming a chef, even though my mother was an amazing cook, and I always had an interest in food. As a teenager, I would often visit my sister Michaela, who was living in London at the time studying hospitality and working in hotels. She had many chef friends, including her boyfriend, and I would hear their fascinating stories about the restaurant world, working with legends like Alain Ducasse and Pierre Koffmann, and everybody was extremely passionate about it. It was in London then that I had my first experience of working in a professional kitchen and a seed was planted sparking a curiosity in me to explore the field further… which I eventually did after moving to New York.

Opening a restaurant is certainly a labor of love, and you took a bit of a gamble when you temporarily closed Aska. Describe that experience, which ended up being a longer break than initially expected. How did you keep your focus on advancing your food and cooking when the matters of physically building a new restaurant came with its daily demands?

It was definitely a huge risk to move and reopen Aska in a new location, especially when we were at a peak, but we quickly outgrew the original space, so it made the decision a necessary one for me. Of course, I had hoped for it to be a swift process, but instead we ended up in a situation that involved many obstacles and delays.

The time between closing and opening was perhaps after all a blessing in disguise: It allowed for me to refine the vision for the new space, not only in terms of food, yet in every aspect of the process from the design of the space to building the team and developing the style of service.

Of course, that risk paid off when you earned two Michelin stars within months of reopening. Then came another rash of other accolades, including from Bon Appetit and GQ. How have those accolades subsequently influenced your cooking?

Recognition like that has a huge impact. It not only inspires the team, but it reinforces confidence in what we are doing, pushing us to continue moving forward and evolving in our cooking. Stagnation or playing it safe is never an option.

How do you define Swedish cooking? And how are you influencing Americans’ understanding of Scandinavian cuisine?

For me, at the restaurant, it has always been more about specific ingredients, flavors and techniques that I consider classic in Swedish cooking, which are largely based on memories that I have from growing up. … Cooking has always played a central role in allowing me to feel connected with where I am from. But is our food traditionally Swedish? No. Are there flavors and specific uses of ingredients that one could consider distinctly Scandinavian? Yes.

At Aska, many of our guests have never tried these particular flavors before, so the meal becomes like a journey of discovery – with these new flavors and ingredients or particular ways of preparing them. I think that’s part of what makes it especially interesting and more than just dinner.

Explain the story you are telling in your upcoming cookbook, Aska. How did you decide what recipes to include and how to approach the structure of the book?

The book is a collection of reflections, stories and recipes from Aska, taking the reader on a journey through our menu in the same order it is served at the restaurant. I wanted to organize the recipes this way rather than separated by ingredient type, like most traditional cookbooks, because we wanted to share as closely as possible through this book what the experience of dining at Aska is like.

Cooking has been a way for me to translate moments in my life that are special to me, and that’s what we’ve tried to do with the book as well. The main narrative sections focus on my path to opening the restaurant and everything involved in that process – from our approach to ingredients to the design of the space itself – and the three places that have influenced me most: Sweden, Upstate New York and New York City.

What’s your favorite Swedish ingredient or food? Why?

Rutabaga. It is known to have originated in Sweden and also goes by the name “swede.” I love the texture and the flavor with its slight sweetness and bitterness. I also like the color. We use it at Aska, and you can read about it in the cookbook.