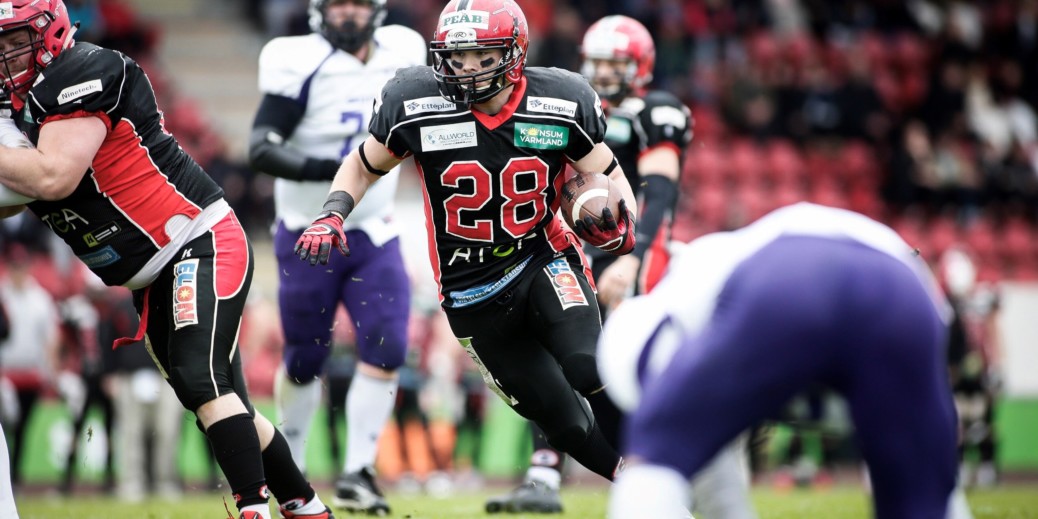 Like most of Europe, football is huge in Sweden. American football, on the other hand, is still a bit of a novelty.

But look closely and you’ll see Swedes popping up on college football rosters across America. Schools like Notre Dame and Rutgers featured Swedish players last year, with Purdue and Marshall among those programs who have boasted Swedes in the past few years.

In Sweden, more and more athletes are taking a crack at American football as youth development programs and leagues continue to grow.

One of, if not the most prominent, programs is the Carlstad Crusaders, based in Karlstad, which sits on the Klarälven River near Lake Vänern, 300 miles west of Stockholm.

Professionally, the Crusaders captured their eighth straight Swedish title when they beat another power, the Örebro Black Knights, in July. Launched in 1991, the Crusaders offer youth programs for kids 12 and up and teams for women, in addition to their powerful pro team, which has become one of the best in Europe.

The Crusaders are in the midst of a capital campaign to build a sports center to continue the development of their program, which has sent players to Division I colleges, NFL Europe and NFL training camps. We caught up with Robert Sundberg, the general manager of the Carlstad Crusaders to talk about the club’s history, growth and future and the future of American football in Sweden.

What attracted you to rejoin the Crusaders in 2014?

After being away from football for a couple of years and living in Stockholm, my family decided to move back in 2014. So, looking for work, I got the question from the Crusaders if I was interested in starting to work for the club again. After some thought, I decided that it would be a good fit and got hired by the club shortly after.

Describe your previous experience with American football and the Crusaders.

I myself first got in contact with the sport in 1989: A friend’s brother brought a football back from a visit to the States, and we started to throw the ball in his back yard during the summer. In the winter, we had become quite a few and rented a hard-court indoor facility and started playing full contact football on the handball field with no pads. I played volleyball at a high level at the time and felt that the mix was not good injury-wise. 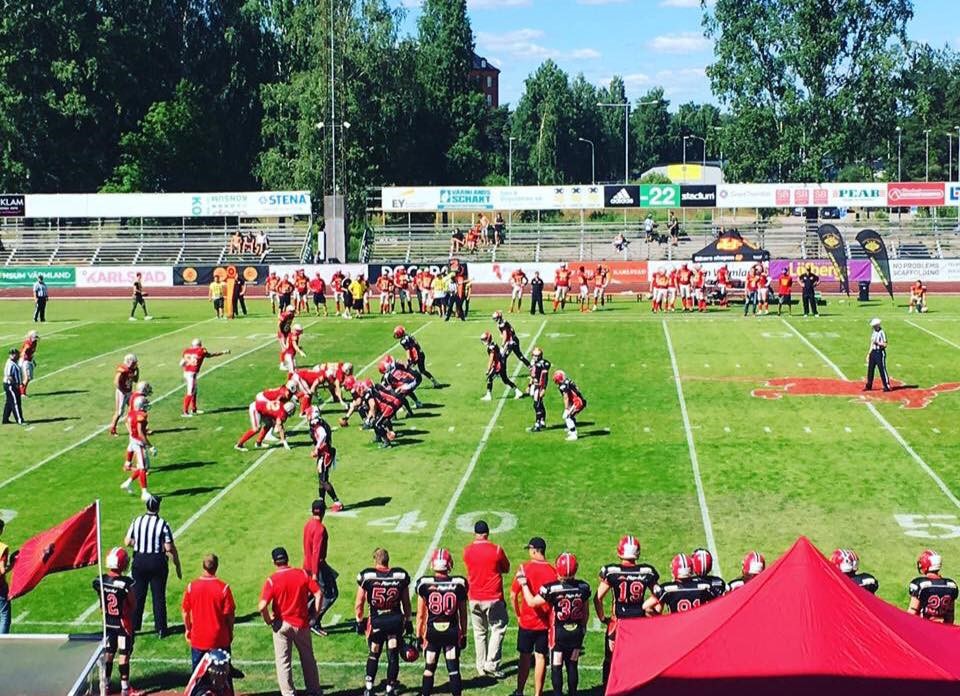 I watched the first unofficial game for the then Forshaga Crusaders against Kil Butchers on a field just on the backside of my child home, and the Crusaders won 62-0. The teams merged and started the Carlstad Crusaders in 1991. In 1995 when studying at the Karlstad University, two of my classmates played for the Crusaders and asked if I wanted to join, and I did that winter. Then playing from 1996 to 2005 with the Crusaders, winning EFAF cup gold in 2003 and four National Championship runner-ups. During this time, I was also a member of the board and general manager from 2001-05. I also played on the national team from 2001-04.

In 2001, I hosted an NFL youth camp in Karlstad where 90-plus young players from the Nordics got tutored by NFL Europe coaches. Moving to Stockholm, I transferred to Tyresö Royal Crowns, where I played for three years and was the defensive coordinator for two years. I also did some work for the Swedish National Football Federation and cofounded a media production company doing highlights and short reports from National team events.

The Crusaders have had an impressive run in their nearly 30-year history. What are some of the keys to that success?

Of course, a lot of dedicated and good players and coaches have been raised in the club, but I think we also were early in founding a good and solid youth program. We took great pride in not only being good on the field, but also off the field. We created one of the best game-day experiences and got really good people onto the board. We started to work with visions and where we wanted to be in the future. That has continued during our journey, and we are always planning for the future. What we do this year is for us to harvest next year or the year after that. We also had several years that we did almost go all the way. Seven silver medals in eight years made us really want to win that gold. And when we did, we won several. Even though almost the whole team has changed since the first gold eight years ago, we owe it to all new players that come up from our youth program or we recruit and have not won, to give them the same experience.

In terms of development, what are some of the goals of the program?

We have a long-term vision to be the best football program in Europe on all levels, not only on the field, but also have the best refs, game-day experience, board, youth program, ladies team, facilities, etc. In the short term, we focus on creating our own sport center, dedicated to American football. A 16,000-square-foot building containing a cafe, offices, gym, meeting rooms, locker rooms, turf field etc. We are starting a national high school football program giving the students the possibility to learn more about football and become better football players. We hope for our ladies’ team to also be a top team in Sweden and put a lot of effort into that.

We’re seeing more and more Swedish players playing college football in America. Do you see that as a growing trend?

Definitely, I think we have about a handful of Division I players at the moment. We have, I think, another handful committed to Division I programs this year, two at Rutgers and two at Temple for example. We have Jordan Genmark-Heath, who played for Notre Dame as a true freshman.

What needs to happen for more Swedes to have the chance to play college football in America, and ultimately the NFL?

I think with the globalization of American football, the NFL needs to look into other markets other than North America, both for talent and for commercial aspects. The NFL is growing here in Europe and in Sweden: It has become quite cool to follow the NFL. We send seven games live in different channels every week, we have a studio with 2-3 experts for game shows and color commentators during the game being able to explain American football to the Swedish audience. NFL Network is on the major cable company and the NFL is more accessible than ever.

With good youth programs and the national high school programs, we will create more and better players and prepare them for what they could expect going to college. Many players do a high school year in the States and show their talent to American colleges. We had a guy who started playing football in our youth program at the age of 12 (Sebastian Johansson) playing the junior national team, our seniors. Then he played a high school year in Raceland, Kentucky and got an offer from Marshall University. After five years, he did not get drafted but picked up by the San Diego Chargers in 2016. Unfortunately, he got cut but now is back in our club as our strength and conditioning coach and is playing offensive line.

It is very important for us to be able to tell our youth players that everything is possible. You can make it to the NFL, even though you are from Karlstad, Sweden.

The Crusaders are well on their way to raising the funds to build an incredible sports center complex. Where do you stand now, and when do you hope to break ground and complete the project?

We have a financial base to start planning and raising money for this. We are in dialog with our municipality about what they can contribute. We are talking to potential sponsors both in Sweden and the United States as well as different foundations. The budget is fairly small, about $3.5 million USD, but for us, it is a lot of money that we, as a nonprofit amateur club, do not have. We have about two-thirds of the funding in close range, but that is depending that we can find the last third. We have gotten all permits and the land for us to build upon and are now raising money for this to happen. We hope to start construction this year and have the facilities ready for the 2019 season.

Are you looking for American sponsors? If so, describe some of your goals and needs.

Yes, we are looking for American sponsors and recently made a two-week trip to the USA to see if we could make any connections. We hope to find someone that likes American football and wants the sport to grow globally. We reached out to the NFL, to several universities, contacts, PR firms and companies we had contact with earlier, several Swedish-American organizations to see if we could find people that were willing to help us or had connections to people we should talk to. We have a lot of interest in our project and are continuing to talk and expand our network in the USA.

How closely do your players follow college football in America and the NFL? Any favorite teams?

Personally, I follow American football very close, so there are many late nights on Sundays watching the NFL. And there are many people in Sweden doing the same. Some watch more college football and some NFL, but some watch both, just like in the USA. My favorite team in NFL is the Dallas Cowboys that I started to follow in 1995 and have ever since.

How popular is football today in Sweden? Where do you see it in 10 years?

The interest is growing both in watching and playing. We started a U-11 team last year and immediately got 30 kids playing tackle football at the end of the season. There are four cornerstones in the sport to be bigger and grow in Sweden as I see it:

So, in 10 years, I believe we have all this and then the sport will really be growing.

If interested in finding out more about the Carlstad Crusaders and their campaign, Robert Sundberg can be reached at Robert.Sundberg@crusaders.se.