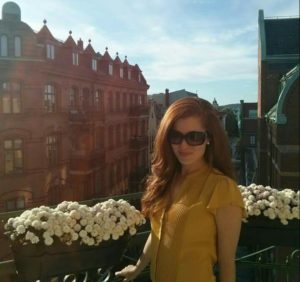 Living abroad can be both exciting and scary. From language barriers and cultural etiquette to entering a foreign workforce, there are plenty of new things to learn.

Ariel Kramer has been doing just that.

In this Q&A, the American expat living in Sweden tells us about her experience living and working abroad.

Where were you born?

I was born and raised in Pennsylvania, right outside of Philadelphia. I spent my childhood and teen years bouncing back and forth between the U.S. and Panama, where my mom is from.

What brought you to Sweden?

In 2011, I met my Swedish boyfriend while traveling. After a couple years maintaining a long-distance relationship I decided to move to Sweden.

What inspired you to start your own company?

It was really hard to find a job in a country where I didn’t know the language, plus I had little work experience. After searching for months prior to my move, I decided I’d rather start my own company and leverage my current contacts than arrive to Sweden unemployed.

What is one challenge you experienced when moving to Sweden?

When I started my company I only had U.S.-based clients. Getting clients in Sweden was much more difficult due to my lack of a network. After several months of attending networking events and sitting in co-working spaces, I finally built a network, which opened the door to new business opportunities.

What are some major differences between working the United States vs. working in Sweden?

Swedes are not always the quickest at making decisions, which isn’t necessarily a bad thing. They put a lot of thought into their decisions and it’s not unusual to have several meetings (and even meetings about meetings). The benefit of their very thoughtful process is that once a decision has been made, Swedes stick to it. Coming from a fast-paced environment, this was something I struggled with and had to learn to grow my patience. But, it’s comforting to know that Swedes are good for their word.

What is the biggest culture shock you experienced during your first few months in Sweden?

Most Swedes don’t do small talk. Sitting next to someone on a bus? Chances are it’s going to be a silent ride. Sure, Americans don’t automatically start chatting up random strangers, but it definitely isn’t considered strange if you do. I learned this pretty quickly after a few attempts to make conversation with people I didn’t know. Swedes were never rude, but were definitely surprised and a bit shy.

What advice do you have to offer people traveling to Sweden? 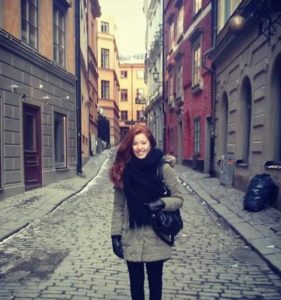 Don’t just stick to the big cities. Travel to small towns or islands to see other beautiful parts of Sweden. Most people I know who travel to Sweden only go to Stockholm. There is so much more to Sweden than Stockholm! If you’re coming in the summer, don’t miss out on the chance to see Gotland, Öland or small summer towns/islands along the coast. If you come in the winter, head up to the North. Norrland is extremely beautiful and a really great experience. Stockholm should only be a small part of your trip if you really wish to experience Sweden.

What are your top three favorite things to do in Gothenburg during your spare time and why?

When I have free time I love to take the ferry to the archipelago. There are so many gorgeous islands to choose from where you can walk around and have a bite to eat. If I’m not doing that, I am probably meeting a friend in Haga, one of the most beautiful old parts of the city filled with cafes or taking walk in Majorna. Majorna is a picturesque residential part of the city with tons of shops, restaurants and cafes. I find going to all three of these places extremely peaceful and relaxing. Gothenburg has a really “cozy” vibe.  It may not be New York City, but I have come to really love this city.