Eton: 90 Years Of Tradition Coupled With Modern Innovation And Design 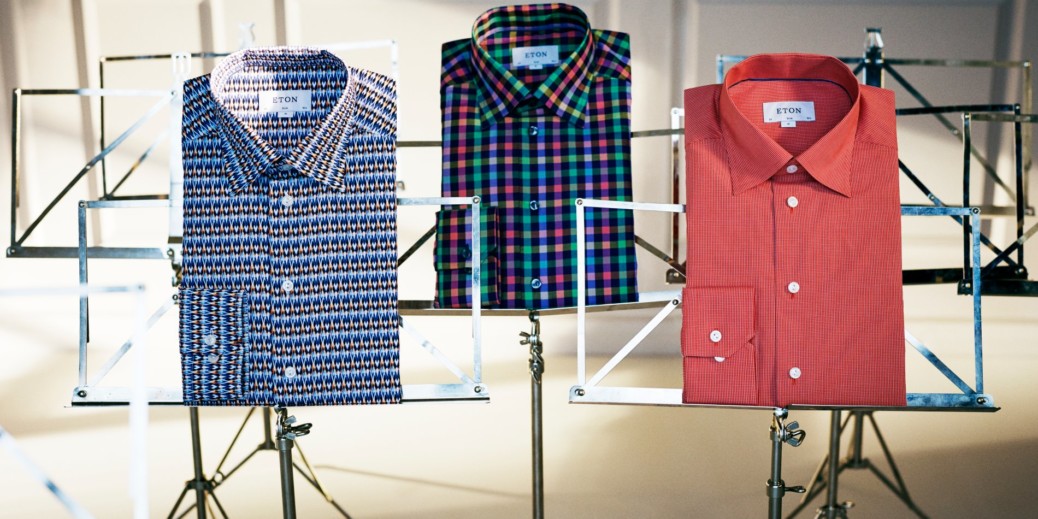 Eton: 90 Years Of Tradition Coupled With Modern Innovation And Design

Annie Pettersson probably never would have expected the handmade dresses she sewed in her kitchen would be the foundation for an international men’s shirts and furnishing company.

But, 90 years ago, Eton sprang from that home-based business, when Annie’s husband, David, was forced to close the family’s sawmill during the Depression in the 1920s. Together, they started Syfabriken Special, which translated to The Special Sewing Factory, in the small town of Gånghester, not far from the southwestern coast.

Today, Eton’s shirts are an international operation: designed in Sweden, stitched mainly in Romania (not to mention in Sweden, among other sewing facilities), made with fine cotton grown in Egypt and spun and woven in Italy, Turkey and Switzerland. Their English name comes from the small town that Rune and Arne Davidson, the founders’ sons, passed through while exploring fine shirt fabrics. They brought home a sample, leading to the launch of the “Eton shirt” in 1948, and based on phenomenal sales, the company adopted Eton as its official name two years later.

Christopher Donohue, Eton’s sales director for North America, has no difficulty spotting an Eton shirt as he walks any busy city street. Certainly, he knows all the collar variations, but he first singles out the fabric, particularly unique prints created specifically for Eton by the design team.

“The customization of the patterns of our shirt are what makes it,” Donohue said.

Indeed, those prints have been a collector’s item for customers who invest in each season’s new offerings, introducing a nearly century-old company to new audiences who might not be in need of the traditional suit shirt.

In the modern era of corporate casual and tech startup billionaires adopting the hoodie uniform, Eton spans the spectrum in its core dress shirts – featuring nearly a dozen collar variations and four basic fits to those eclectic patterns and motifs. Oddly, the company also preserves a niche in formal shirts, as other design houses have stepped away from accessorizing the classic tuxedo.

Leading the design team today is Sebastian Dollinger, dubbed a “rockstar in menswear” (and in real life, too) by Bloomberg. Introduced to Eton by his father, Jan Borghardt – an early Eton designer who now serves as senior adviser – Dollinger worked his way up before being named creative director at the young age of 27. The design team is based in Stockholm, with others located at Eton’s corporate headquarters in Gånghester, a town of less than 3,000. HuffPost can’t praise the Eton brand and its creative director enough, with repeat rave reviews after major launches. During January’s four-day Pitti Uomon, the world’s must-see international menswear event that drew some 25,000 buyers, the site noted: “The Swedish shirt brand has become synonymous with fashion with a conscience, and a symbol of how great ethics and cool designs can make for a powerful, winning combination in today’s market.”

What caught the critic’s eye? Dollinger’s interpretation of a weeks-long visit in Kyoto, as he wove both subtle and overt elements of Japanese culture throughout the Fall/Winter 2018-19 collection – and, in particular, one shirt that features a flower design with an unexpected detail: “Two Sumo wrestlers intertwined in a match on the back of the shirt. It’s so perfectly wearable, yet dreamy and whimsical that my heart truly did skip a beat when I saw it.”

Eton products extend across an industry category known as men’s furnishings, which includes ties, pocket squares and cufflinks, just to name a few. The price tag on a basic shirt generally starts at $265, with neckwear beginning at $145. Eton shirts and products are available at Nordstrom, Neiman Marcus and Saks Fifth Avenue stores, not to mention fine menswear shops from coast to coast. Eton also operates flagship stores on New York’s fashionable Madison Avenue and in Santa Monica, Calif., and an online shop.

About a third of the finished products are sold in the United States, with another third prominent in the Scandinavian and Northern European markets. About half of the shirts sold reflect classic styles, but the more casual side has grown quickly.

Donohue, the North American sales director, describes the product line as “affordable luxury,” further refining the description to equate the Eton offering as “the Audi of shirts. It’s not a Ferrari, but it’s got a great engine, all the safety features you want, a real catchy design – and you want to take it out for a spin.”

The target customer is a gentleman in his late 20s to early or mid-30s who really likes both fine quality at a valuable price point.

“We really let the product do the talking,” Donohue said. “People come back. What has made Eton what it is, is our laser focus on not doing everything – but doing a few things and doing them really well…That means the customer is getting exactly what he pays for, for a very long time.”

Quality is at the top of the list, closely followed by innovation.

Eton notes that each classic shirt includes 45 pieces, assembled with 12,000 stitches. A navy ribbon sewn inside the collar is one of its trademarks. (By the way, American customers favor Eton’s semi-spread collar, but the new “hidden button down” is gaining traction.)

The company sets its own rigor around quality and sustainability, which are infused into daily operations, according to Donohue. But those high standards haven’t hindered the company. In fact, they have helped the company to continue to evolve and be an industry leader, developing and launching new manufacturing and efficiency processes.

Take Eton’s wrinkle-resistant fabric, which starts with the best cotton. The low-care component of the shirt comes not from chemical treatments but from a special four-week finishing process that changes the molecular structure of those cotton fibers, along them to be knit and woven tighter. To this day, Eton recommends those shirts be laundered in a cold wash, spun until air dry and hung up. Plus, it’s better for the environment than harsh dry cleaning.

First created by Borghardt in his design days, that Etastar shirt

debuted in 1992 at Harrod’s in London. In the first week, 600 shirts flew off the shelves. Today, Eton produces virtually the same shirt, which was the first all-cotton wrinkle-resistant offering in the world.

“You can wear that shirt all day and it will retain its freshness and crispness,” Donohue said.

Today, the Petterssons’ grandson, Hans Davidson, is at the helm, guiding Eton’s continued global growth, which includes expanding its retail base and exploring new product categories. At its heart, however, is Annie Pettersson’s careful attention to doing everything right from the start.

“The culture is still the same, with core family values that his grandparents put into the business,” Donohue said. “Yes, we are a bigger company, but we operate like a small company.”