Halloween in April? Witches, Eggs and Other Swedish Easter Traditions

Halloween in April? Witches, Eggs and Other Swedish Easter Traditions

Nothing screams Easter more than witches running wild through the streets… right?

Around the world, Easter is a Christian holiday celebrating the resurrection of Jesus. While some Swedes honor the religious holiday by going to church, so much of Sweden is secularized that the holiday is more about family, friends and fun.

So, what’s up with the witches?

An old tale surmised that on the Thursday before Easter, witches would travel to meet the devil before returning the night before Easter. They would fly on broomsticks and try to sweep up little children to offer to Satan himself. The witches’ tale inspired a tradition that takes place each year. Similar to the U.S. version of Halloween, Swedish children dress up as witches and travel around to neighborhood houses, swapping Easter drawings for tasty treats. Because of this, don’t be surprised to see scary witches and evil chicks alongside traditional home decorations of eggs and chickens. 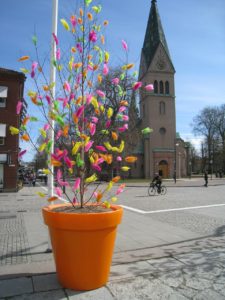 In America, the Thursday before Easter is commonly known as Holy/Maundy Thursday, and in Sweden the day is known as skärtorsdag. Archaically, the word skär means to “purge” or “clean,” but in modern Swedish the word translates to “pink,” leading much of the younger generation refer to the day as Pink Thursday. On this day in Sweden, birch branches are cut, put in vases and adorned with brightly colored feathers, but 500 years ago, the branches were not used as decoration but for flogging each other to commemorate Jesus’ suffering on långfredag (Good Friday). Thankfully the Swedes have moved away from that custom.

Unlike America’s custom of filling a basket with colorful straw, candy and sweets, in Sweden, parents put treats in brightly colored påskägg – large eggs typically made from cardboard, tin or plastic. Children receive ample amounts of candy over the holiday – from their collections after gallivanting the neighborhood dressed as witches to the full-to-the-brim eggs their parents present them (or hide) on the eve of Easter.

Balance out all the sugar with a savory feast

It wouldn’t be a Swedish holiday without a smörgåsbord. Due to the nature of holiday, it makes sense eggs would be a large focus the menu; they often are prepared several ways, alongside pickled herring, salmon, meatballs, quiches and more. Swedes typically enjoy the big feast and celebration on the eve of Easter – on Easter Sunday itself, dinner often consists of lamb… and endless leftovers. 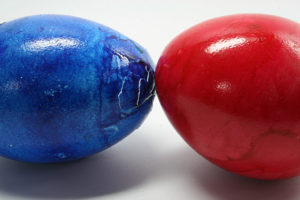 Americans are familiar with the egg hunt, but if there was another game to adopt from Scandinavian cultures, it would be egg pecking (äggpickning). The object of the game is pretty simple: Keep your egg intact while breaking your opponent’s egg. Contenders each have a hard-boiled egg, and at the same time they knock the eggs together, tip to tip. The cracked egg loses, and the whole egg moves on to his next challenger. Want to see it action? Check out the Chiappa family’s demonstration.

Can’t get enough Swedish Easter traditions? SwedishFreak has a great round-up of Easter happenings in Sweden.