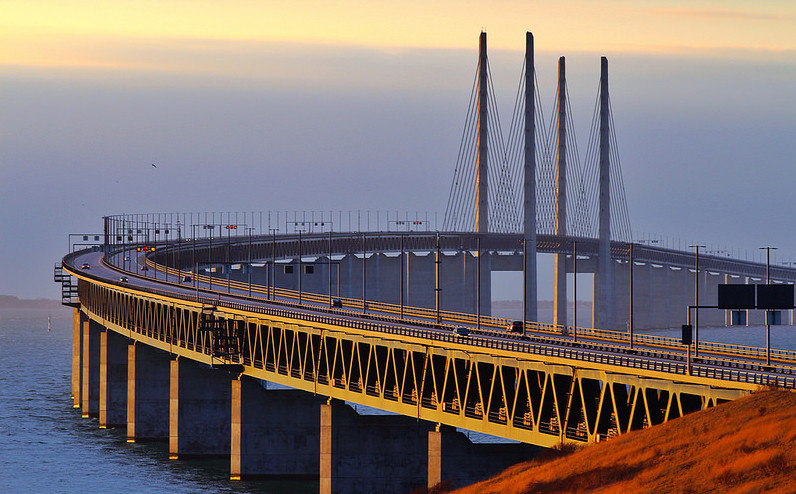 Work & Business, Sweden, In the News

The bridge connecting Sweden and Denmark not only is an engineering wonder, but also a link to so much more

This is not a story for gephyrophobics.

In fact, just the opposite. If you love bridges, those expansive engineering marvels that connect cultures and stir curiosities, then have we got a span for you: the Öresund Bridge.

Sweeping majestically across the Öresund Strait, the eight-mile bridge (actually, there are five miles of bridge and almost three more of tunnels and even a brief stretch atop a man-made island) connects two Scandinavian neighbors whose watery dividing line throughout history made crossings from Denmark to Sweden (and vice versa) a protracted undertaking.

Before the bridge officially opened in the summer of 2000 – just six years after the “Chunnel” paved the way for such trans-border connectors – travelers queued up to catch the ferries leaving from various embarkation points, and while the crossings themselves were perfectly capable (and to some extent still are) the maritime option today is more likely to beckon those with a penchant for the windblown romance of the open sea.

As for us, give us the over/under route.

The brief journey is something to behold, not only for the efficiency by which the Öresund Bridge connects two of the region’s most populous cities – Copenhagen to the west and Malmö (Sweden’s third largest city) to the east – but also for the sheer grandeur of the experience. Laid out to your left and right, as you glide comfortably at 110 kph (or close to 70 mph) around 200 feet above the sea, is the sweeping, glistening expanse of the Öresund Strait, the often irascible waterway that lies between the Baltic and North Seas. Weather permitting, roll down the windows and take it all in.

The Öresund Bridge also is the world’s longest cable-stayed bridge for both road and railway. Trains speed along under the auto deck, connecting Scandinavia to the continent by rail and providing expanded Eurail pass options. You can get a five-day Sweden/Denmark Eurail pass for under $400 (USD).

From a distance, the bridge strikes an iconic pose. Its towers rise 669 feet – the height of a 60-story building – and with the cables falling diagonally from them in perfect symmetry, they assume the effect of mast and spinnaker as if the bridge itself is sailing across the horizon. It is a testament to the marriage of form and function and tribute not just to the engineers at Ove Arup & Partners but even more so to the spirit of abiding collaboration between the two countries that made such a heroic undertaking possible. (There was even a compromise on the name, with the Swedish Öresundsbron and the Danish Øresundsbroen becoming the hybrid Øresundsbron.)

The Öresund Bridge is more than 82,000 tons of steel and concrete. Nor is it simply the sum of what $5.7 billion U.S. can buy you. The bridge itself is an economic conduit, a critical link that has helped resolve contrasting challenges on each shore. To the west, Copenhagen was bustling with opportunity, long on jobs but short on places for folks to live. To the east, Malmö was facing the opposite circumstance with plenty of elbow room for the locals though without a strong base of employers.

When the bridge opened 15 years ago, the 20-minute cross made Malmö a convenient suburb of the Danish capital. Today, many of the 17,000 vehicles that make the crossing daily are commuters (who needn’t worry about passport inspections). And so are the hundreds who commute each day by way of the Malmö City tunnel, which in December 2010, connected the inner city to the rail network. In effect, the bridge has fostered a symbiosis between its cross-sound neighbors. Some estimates put the bridge’s economic stimulus at more than $1 billion U.S. per year, a figure that is expected to grow.

Bestride all that activity the Öresund Bridge stands stoically at attention, as if ready to return your salute or welcome you aboard, even the gephyrophobics among us.

What you may not know…