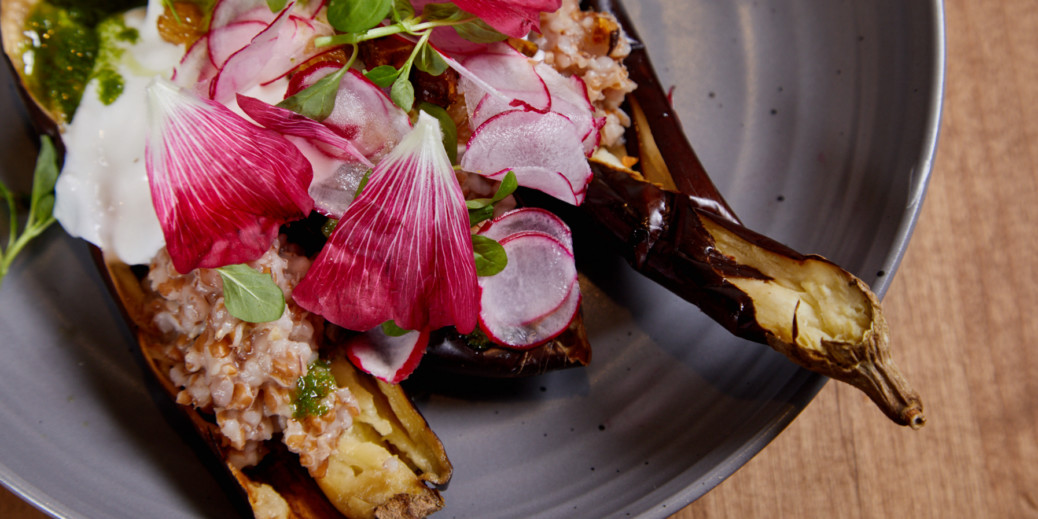 Roberth Sundell has gone back to his Swedish roots for his second restaurant.

He’ll be serving up the kind of food that he’d pick up roaming the streets of Stockholm. Dishes such as lamb kebabs. Falafel with pita. And don’t forget grilled bratwurst with house mustard.

Wait a minute. What about the Swedish meatballs?

With the appropriately playful name of Stockhome, Sundell has created a family-friendly restaurant in Petaluma, Calif., that features the types of food that he’d enjoy during a night on the town – and a contrast to the refined Pläj, the San Francisco restaurant where he also is chef-owner (check out our review of Pläj, pronounced Play).

Dig into Stockhome’s menu a little more, and you’ll find more traditional Scandinavian treats, such as tunnbröd rulle (a grilled hot dog classically loaded with everything but the kitchen sink), grandma’s style of herring, shrimp Skagen and gravlax. The bar features Scandinavian beers on tap.

And there are those meatballs, served in one mashed potato bowl with gravy, lingonberries and pickled cucumbers. If you’re still hungry, stop by the Swedish candy bar for your Saturday snack.

“We wanted to create a restaurant that can be a part of who we are as a family, a restaurant where the kids can want to come after school and we can spend this together,” said Sundell, who partnered with his wife, Andrea, on the concept. Together, they are raising four children: three sons and a daughter.

“Scandinavia has changed so much,” he added. “This is New Nordic cuisine…I take the old recipe, and I try to elevate the old dish to something else to make it new.”

A twist of fate

Sundell ended up in culinary arts somewhat by chance.

An allergy to dust diverted him from his construction plans and into the kitchen. First learning to cook from his grandfather’s new wife, who had a restaurant (“I grew up eating really well, so to speak,” he said), Sundell eventually studied for three years at the Royal Culinary Academy.

He quickly learned that kitchen work is as physically demanding as construction, not to mention lower pay for the hours.

Sundell worked at a Swedish ski resort and a London restaurant before returning home when his father was diagnosed with cancer. Joining the staff at the Nationalmuseum restaurant, he found a chef who took him under his wing and helped him developed his cooking talents.

After his father succumbed to cancer, Sundell packed his bags and headed to the United States, with a three-month plan to do nothing but travel and explore.

“My first day in San Francisco, I met the woman who would become my wife,” he said. “I knew instantly that something special was going on.”

Before long, he was married, had a young son and was working his way up the ranks at an Arizona resort. He found himself immersed in Tex-Mex menus, quite a departure from his Swedish heritage. As he took on new responsibilities, he discovered he no longer was just a cook.

“Before, it was always a job. One day, while I was doing menus and figuring out food costs, I got a vision,” Sundell said. “Now I understand what a chef is. You can’t become a chef in one day. It takes years to figure out.”

After a stint at the legendary but now-closed Café Pierre in Los Angeles, where he mastered old-school techniques, Sundell was recruited to the commercial kitchen of a 600-home luxury camp near Lake Tahoe. The snow and ski season reminded him of Sweden, and he signed up for one year – that grew to five.

A resident with Norwegian roots asked him to prepare a Scandinavian Christmas feast, which Sundell expected to be for 25 people – not the 250 people who were on the guest list. The success from that event prompted an invitation to open a Scandinavian restaurant in San Francisco, leading to Pläj.

With the family now living 40 miles to the north in Petaluma, the couple reignited their interest in opening a smaller venue that would be part of their own community. Enter Stockhome.

The purposefully casual design encourages families to come and adopt it as a home-away-from-home. The quick-serve restaurant reflects the changing culture in Sweden, include a significant boost in Mideastern immigrants starting in the 1970s. “Consider it the United Nations of local dining,” said the local newspaper in its review.

“We want to take people to Stockholm and make it fun,” Sundell said. “What do you eat when you’re there? It doesn’t have to be really Swedish, but it brings out all the nations that are in the city now.”