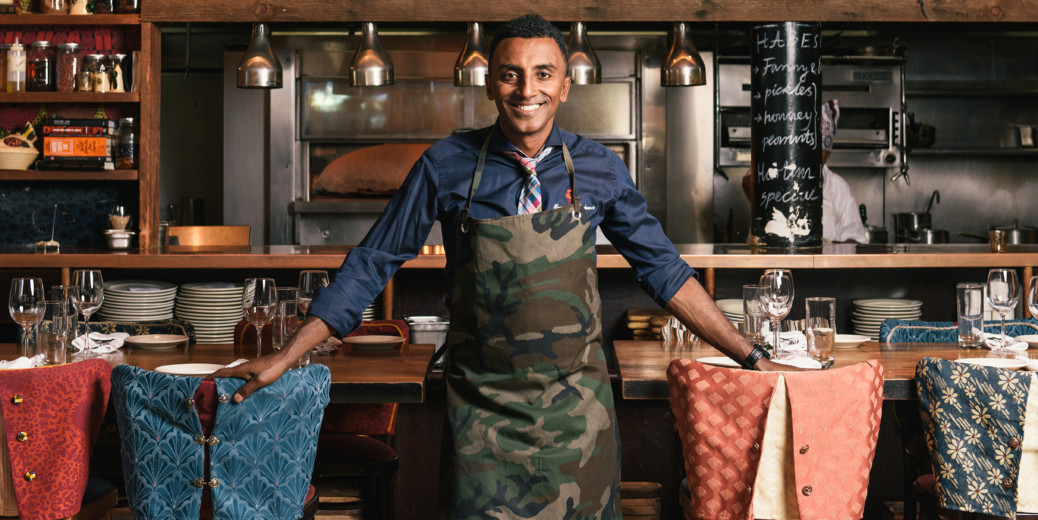 If you’ve picked up a food magazine or channel surfed to find a good cooking competition in the last decade, chances are you’ve seen or heard of Marcus Samuelsson.

Samuelsson was born in Ethiopia and raised in Sweden, where he developed an affinity for cooking at a young age, joining his grandmother in the kitchen and learning to make dishes with Scandinavian staples like mackerel, herring and the quintessential Swedish classic – the meatball.

Samuelsson broke out in the food scene when he was the executive chef at Aquavit in New York City (we previously featured Aquavit’s executive chef who came in after Marcus). It was here where he received a three-star review by the New York Times, which helped him attain food stardom. Samuelsson has been recognized several times over by the James Beard Foundation, an organization dedicated to celebrating and honoring chefs and other foodies in America who are making food culture more approachable and diverse. His most recent win was in 2016 as one of the winners in the category of Who’s Who of Food & Beverage in America.

Samuelsson has written multiple cookbooks and appeared on shows like “Top Chef Masters,” “Anthony Bourdain: Parts Unknown,” “Iron Chef America,” “Chopped” and “The Taste,” among others.

We recently caught up with Samuelsson for a Q&A. Read on to find out who has influenced his cooking, who inspires him in the kitchen and what’s next for Chef Marcus.

We’re huge fans – thanks for taking the time to chat with us. You were born in Ethiopia and raised in Sweden from a young age. How does your heritage make its way into the dishes you put on your menus?

I always like to blend some Swedish and Ethiopian flavors into my menu at all of my restaurants. I grew up eating mackerel, salmon and herring, so I usually have at least one of those on my menus. My grandmother Helga had a huge influence on me and first taught me how to cook when I was younger. I have her Swedish meatballs on most – if not all – of my menus. I also like to add the Ethiopian spice berbere wherever possible – could be in a chicken dish or even dusted on a lemon wedge for a cocktail.

You were only 24 when you were the executive chef at Aquavit, where you received a three-star review by the New York Times for your cuisine. What was that experience like?

I don’t think anything can prepare you for that experience. You do the best you can do and stay focused on the work. I definitely saw a shift in the attention I got after that review, and I was very grateful for it.

You have several restaurant locations in Sweden – a lot of the dishes on the menus
feature more of an American cuisine. What are some of the most popular American dishes to a Swedish crowd?

At Kitchen & Table, the goal was to tap into the casualness of American food but it’s also highly layered. It’s beyond just burgers, which are pretty popular, but also offering delicious food that works day, afternoon and into night. The rotisserie chicken seems to be a favorite with the locals.

You’ve got a dish at Red Rooster Harlem called Helga’s Meatballs, named after your grandmother, and you’ve recently Tweeted recipes for glögg and semlor. What’s one of your favorite Swedish dishes to make?

I love herring and mackerel because they are core to my upbringing so anytime we can bring that to the menu, we will.

Music plays a big part in your restaurants and you’ve incorporated playlists into your most recent cookbook, Red Rooster Cookbook. We know it’s a good partnership (hello, SXSW), but what makes food and music go so well together?

Who are some of the chefs that have inspired you the most?

Charlie Trotter was a big deal to me, and I remember reading his cookbook and thinking it was unbelievable what this American could do in the kitchen. Jacques Pépin has always inspired me and influences a lot of what we see today in this moment of food. Leah Chase and Edna Lewis are huge inspirations, and for them, cooking was their vehicle for civil rights, which is very powerful.

You’re a bit of a Renaissance man: You’re in the kitchen, you’re judging cooking competitions on Food Network and you’re putting out cookbooks. What do you get the most enjoyment out of?

I enjoy watching a young student come in and after a few years, they experience more than they ever thought they could when they leave. You watch these talented chefs travel the world, cook amazing foods, become notable chefs and it’s incredible to see that.

What is the most important tool in a chef’s arsenal?

I was inspired to celebrate Harlem and food and we thought to do it during a week-long period with guest chef dine-in events and a grand tasting and cooking demos in the park. During this time, Harlem becomes the center of cooking for food and wine. It changes the conversation of what urban cities could look like and changes the foot traffic, and traffic of where great food should and could be.

Because you’re a football fan, we have to go there: Zlatan. It seems like Swedes either love him or they don’t. You’re a Gunners (Arsenal) fan, but how do you feel about the Swede on Man United?

I love Zlatan and what he has brought to us in terms of identity, and all these incredible moments he has given to us. Though I’m not a Man United fan, I always root for him.

Harlem EatUp! Festival in May and the opening of Red Rooster in Shoreditch, London. I’m really excited to bring the Rooster to East London. I’ve been a fan of the neighborhood for years and love what it has become. Later this year I’ll also be opening a restaurant in Newark, New Jersey in the historic Hahne’s building.