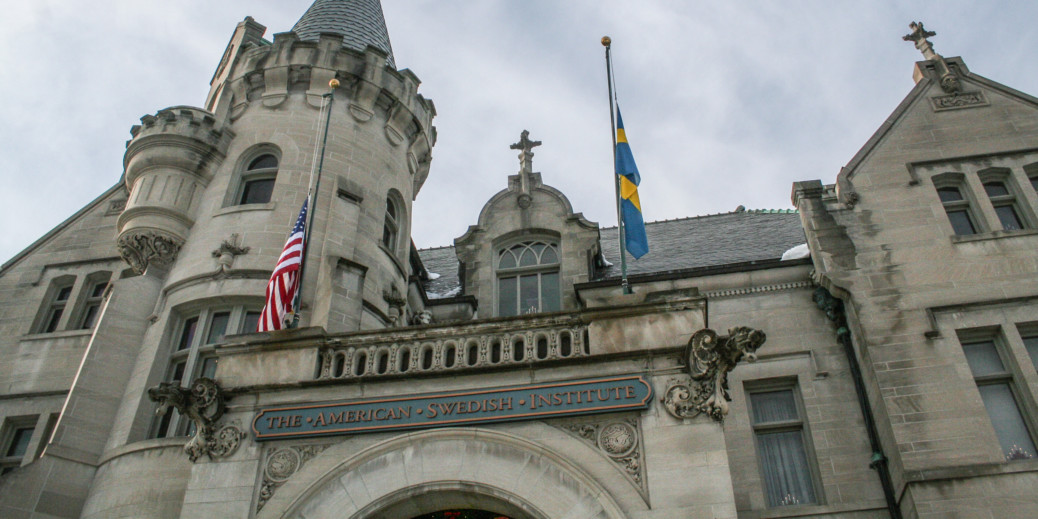 We’re big fans of the American Swedish Institute in Minneapolis.

As a follow-up to our profile of the museum, we chatted with ASI President Bruce Karstadt.

One of his major accomplishments since he assumed his role in 1990 was overseeing the design and construction of a 2012 acclaimed contemporary addition to the iconic 1908 original Turnblad mansion. He also has another title: Honorary Consul General of Sweden for the State of Minnesota.

We talked with Karstadt about his role at the museum, how ASI has changed over the years and the importance of the cultural ties between the United States and Sweden.

You’ve been with the American Swedish Institute for more than 25 years. How has the museum grown and changed since you started?

I think I can say that clearly the last five to six years when we were able to enlarge the campus and create a new cultural center and provide new interior spaces as well as outside programming spaces has been the most significant change at the American Swedish Institute. It essentially doubled the size of ASI. It created much-needed parking, but also gave us the capacity to really respond more effectively to the needs and interests of our community – not only our long-standing members, but also those who may have never been here before.

The new center with the on-grade entrance that leads people into a cultural center with café and beautiful contemporary furnished spaces has really attracted new audiences here. Before construction, we were welcoming 45,000 or so people to ASI on an annual basis. Last year, we had about 140,000 people to ASI whether to visit the museum, take part in a program, attend a family event or just the café and shop.

You’ve been honored with numerous awards for your work to strengthen the cultural relationships between Sweden and the United States. Can you tell us more about that and why it’s important?

I’ve been blessed by some awards both from the King of Sweden and some other organizations that work at the intersection between Sweden and America. I am grateful for that, but I always accept those with a sense of appreciation for everyone who contributed. This is recognition for work not necessarily that I individually did, but to which so many people contributed effort, funding, enthusiasm and participation. In many respects, I think it’s an award – whether it comes to me by name – I think it’s really an award for the American Swedish Institute and what it represents as a leading institution that serves as a cultural bridge between Sweden and America.

Can you talk more about that cultural bridge – why is it important, and the intersection?

It’s actually a two-way bridge, it’s not one-way. So, I can give some examples of that. People in this region really want to know what’s happening in Sweden today. They’re interested in the music scene, the political scene, what’s happening in Sweden in terms of impact of immigration and refugee policy. They’re interested in sustainable design, architecture, traditional arts and craft. As the bridge from Sweden to Minneapolis, we’re sort of the landing point for all of this. It represents us as an opportunity to open a window to Sweden for many people who come to the ASI and we do that through exhibitions, lectures and public programs.

On the other side, we help open a window to Minnesota in the upper Midwest for people in Sweden. This happens in a number of ways. There is a growing interest in Sweden – a resurgence of interest in Sweden – to reexamine 19th and 20th century migration of Swedes to North America, and we’ve had numerous requests from journalists, writers, artists and musicians, for assistance in researching the story of Swedes and the life they’ve created here in Minnesota. We’re happy to help facilitate their exploration of those topics.

What have been some of your favorite exhibits at the museum over the past 25 years and why?

My most favorite exhibit would be the opening exhibition that we had when we opened the new Nelson Cultural Center in 2012. That was an exhibition of textiles and tapestries by Swedish-American artist, Helena Hernmarck. Helena is a widely recognized and appreciated tapestry artist who has worked with many of the major architects and designers in both this country and in Sweden and Scandinavia in creating and weaving tapestries for placement in new buildings. We commissioned her to create a tapestry for us that hangs permanently in the commons of our new building. It’s a large 14 feet by 9 feet tapestry called “Folk Costume Details.” We had a retrospective as the opening exhibition – when we opened the new campus in 2012 – of tapestries from Helena that were borrowed from institutions, museums, businesses and private collectors from all across the country and in Sweden and it was a fantastic retrospective view of her important work.

What continues to excite you about the museum?

We continue to welcome new people, new visitors and new audiences to ASI – not only people who are visiting the museum, but also new partners and collaborators. We’re excited right now to be planning some adventurous music programming for next year with a Liquid Music series, which is a part of Chamber Orchestra’s work. We’re looking forward to an interesting musical adventure with Liquid Music here on our campus next year.

We’re also reconsidering our historic mansion, and laying some plans for renovation and restoration of additional rooms in the historic mansion – the Turnblad Mansion – which is our original campus. We’re looking forward to the 90th anniversary of the American Swedish Institute’s founding in 2019. We were created by Swan Turnblad and his wife Christina in late 1929. We’re excited to begin to lay some plans and ideas – nothing to reveal yet – about how we can celebrate our decades of service to the community.