Ever wonder what it’s like to try to escape from Alcatraz? How about hosting your own game show? Or unlocking the mysteries of a haunted house? Boda Borg lets you live out all three scenarios under one roof.

Akin to the escape rooms that are popping up everywhere you turn, this Swedish company provides a reality gaming experience it calls “questing,” which doesn’t lock its guests into any room, but challenges them to use their minds and bodies in different ways to solve riddles, puzzles and other obstacles — both physical and mental. 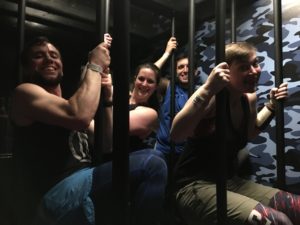 The company got its start in 1993 in the small town of Torpshammar. Originally, the business was started to drum up more jobs and interest for the town. A lot of business ideas were thrown around, until one sparked some interest — a real-life video game.

When Boda Borg opened in April 1995, it was well received. Between May and November of that year, the number of visitors doubled Torpshammar’s population. According to Boda Borg’s website, even the King and Queen of Sweden tried their hands at questing.

Now, Boda Borg has expanded to nine locations around Sweden, including one here in the United States.

Coming to the U.S.

Boda Borg is headed by CEO David Spigner. With the help of fellow Harvard Business School graduate, Chad Ellis, Boda Borg expanded to the United States. Before opening the U.S. location, Ellis quested with Spigner in Sweden. He realized when returning to the States that he was left with a desire and hunger to complete the quests he didn’t finish.

“I was willing to fly to Sweden just to play a game, so if I would do that, people would definitely come to Boston to try out Boda Borg,” said Ellis, laughing.

When Ellis returned to Sweden with his family, he wanted to show them the experience he was talking about. Ellis is a self-proclaimed geek; his wife, on the other hand, isn’t. After hours of having fun questing, his wife and family admitted to having a lot of fun. After that moment, he was confident Boda Borg could be for everyone. It wasn’t just a niche for gamers and geeks.

When trying to find a U.S. location, Ellis was looking for a building at least 30,000 square feet to set up shop. He and his wife wanted to be part of a close-knit community. Malden, 30 minutes outside of Boston, fit that mold.

Since it opened, Boda Borg Boston has been deeply involved with the town of Malden. Its biggest partnership has been Malden Reads, a community program where the whole community reads the same book and participates in a series of events related to the book’s themes.

“The owners of Boda Borg have been incredibly gracious and generous,” said Anne D’Urso-Rose, co-facilitator of Malden Reads. “They seem genuinely interested in investing in the local community and adding value to it. Our Malden Reads Night at Boda Borg is a great way to connect community and build community spirit.”

And you know you have a good thing going for you when the mayor himself is a big fan and supporter.

“When people ask me how Malden Square is making its comeback, I always start my response with Boda Borg,” said Gary Christenson, the mayor of Malden. “They have served as the catalyst to putting our downtown back on the map. With its 200,000 visitors annually, Boda Borg has positively impacted everyone around it.” 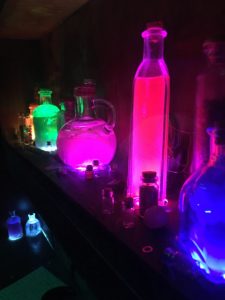 Boda Borg Boston is housed in a multi-level facility with 18 different quests available. Questing tests your mental and physical skills. Each quest begins in a room, and the only way to advance to the next is complete the challenge before it. If and when you fail, players must return to the initial room and start over. There’s universal appeal, it’s suitable for people of all ages from 8 to 108.

“Boda Borg is a concept of failure,” Ellis said.

Strangely enough, that’s why he got hooked.

There are three levels to the quests: green, red, and black. Failure is inevitable, so the three levels indicate how physical the quest is rather than degree of difficulty. Green quests are the least physical while black quests are the most physically demanding. Ellis is a fan of the black quests, Potions (a self-designed quest) and Superbanan being his favorite ones. If you happen to finish all 18 quests in one visit, you can earn the rank of Quest Master.

“[Questing] is not just for entertainment value,” Ellis said. “There’s also values that ties into persistence, problem solving and teamwork.”

Teamwork is essential in these quests, which are designed for teams of three to five people. Quests can be great for strengthening teamwork and boosting team morale.

“I thought it was going to take longer for companies and schools to realize that, but it hasn’t taken a lot of time,” Ellis said. “Since we opened, we’ve had lots of universities and companies have events.”

Even a Cambridge biotech company has considered renting out the Malden facility for an entire week, according to Boston’s NPR affiliate, WBUR.

One of a Kind

Remember when we said Boda Borg is akin to escape rooms? Well, that was before you knew what questing was. Boda Borg actually goes out of its way on its website to say that it’s not an escape-room activity. Questing differs from those popular escape room concepts because players aren’t given instructions. Players are left to decipher puzzles on their own.

In his interview with WBUR, Ellis summarizes what makes Boda Borg different from other experiences.

When asked what differentiates Boda Borg from escape-room concepts and other similar ventures, Ellis said, “Most challenges are built to succeed, but Boda Borg is to fail.”

There isn’t a rulebook on how to play the game. It’s up to your team to figure out, and more often than not while seeking the challenges’ answers – you fail.

Ellis says that around six new quests are added every year; with the next being a new “zany obstacle course” from Sweden.

Tickets start at $22 for two hours to $33 for an all-day pass. For more information, visit www.bodaborg.com/usa/boston/.