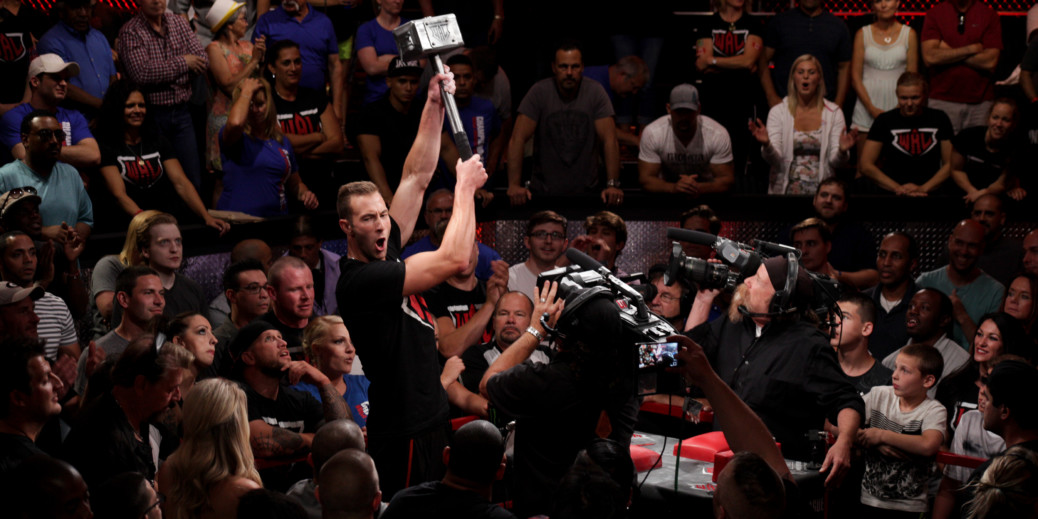 Fifteen years old and lured into the sport by a friend of his father’s – a lumberjack no less – Nannestad made his debut in 2004 at Sweden’s Golden Arm.

“I was very sure that I would win the whole, thing,” he said from his home in Helsingborg, Sweden. “I ended up last.”

He went back the next year and did “a little better.”

These days, Nannestad does much better.

Since 2008, he’s won 20 Swedish national golds. Equally powerful pulling with his right or left arm, he was crowned Arm Wars World Champion with his right arm in 2013 and earned the title for winning with his left arm at the World Armwrestling League (WAL) championship in Las Vegas last summer, an event televised by ESPN.

Simply put, “The Steel Giraffe,” as he’s known, is one of the best arm wrestlers in the world- according to Arm Wars, the 6-foot-5 Nannestad, who often towers over his opponents, is ranked No. 1 in the middleweight class in both arms (only behind the World Champion in each arm).

By day, Nannestad is a harvester operator for a small company with 15 employees that his father started 30 years ago (he now owns the business with his father).

Off the clock, he mixes spending time with his 1- and 2-year-old sons and his wife Jessica with time training to match strength and wits with the best of the best.

Nannestad typically spends two to three hours a week on arm wrestling training and techniques and hits the gym a couple times a week. To prepare for big competitions, working out up to four times a week isn’t uncommon.

Growing up, Nannestad played soccer and spent 10 years in motor cross. After his rather inauspicious start, things changed when the boarding school he attended got an arm wrestling table and he was able to train four to five hours every day four or five days a week.

With Swedish legend Andreas Rundström as his model, Nannestad started making waves when he learned to use his long arms for leverage and became the Swedish junior champion in 2006.

“I’d never been so happy when I won that match,” said Nannestad, whose first nickname was “Ambush” because he often would catch opponents off guard while going backward.

In the early days, Nannestad always wanted to be the best in his right arm, but he tried to train equally. He also knew that “to be good, you have to travel.”

It was in 2010 when he came to the United States for the first time for a competition and 2011 when he faced off against American legend Andrew “Cobra” Rhodes at the King of the Hill Showdown in Lake Tahoe. Even though he lost the supermatch 4-2 – and sustained an injury to his right arm that he still feels today – Nannestad cites that experience as among his favorites in the sport. He got a rematch with Rhodes a year or two later in Las Vegas, winning 5-1.

He also cherishes his matches with Norway’s Frode Haugland, who ranks right with Nannestad as best in their weight class. Despite their rivalry on the table – when six-round matches often end tied at 3 – the pair are good friends. Nannestad, his wife and friends recently traveled to Norway to surprise Haugland for his 30th birthday.

“It’s not like every other sport,” Nannestad said. “On the table when you compete, you can be very mad at each other. In the evening, everybody parties together like best friends.”

Nannestad, tabbed “The Steel Giraffe” by former British puller and Arm Wars founder Neil Pickup, is hoping to return to the World Armwrestling League’s World Championships in June in Las Vegas. He won a qualifier in December and will compete in a European Super Qualifier in March. Separate from qualifying for the world championships, he’ll compete in the Swedish nationals in March.

Last year was the first time the WAL invited Europeans to compete.

“When I knew I was going to Vegas, I wanted to win of course,” he said. “But being realistic, if I had a really good day, finish in the top 3 or 4.

Nannestad clearly has come a long way since his first time on the table.