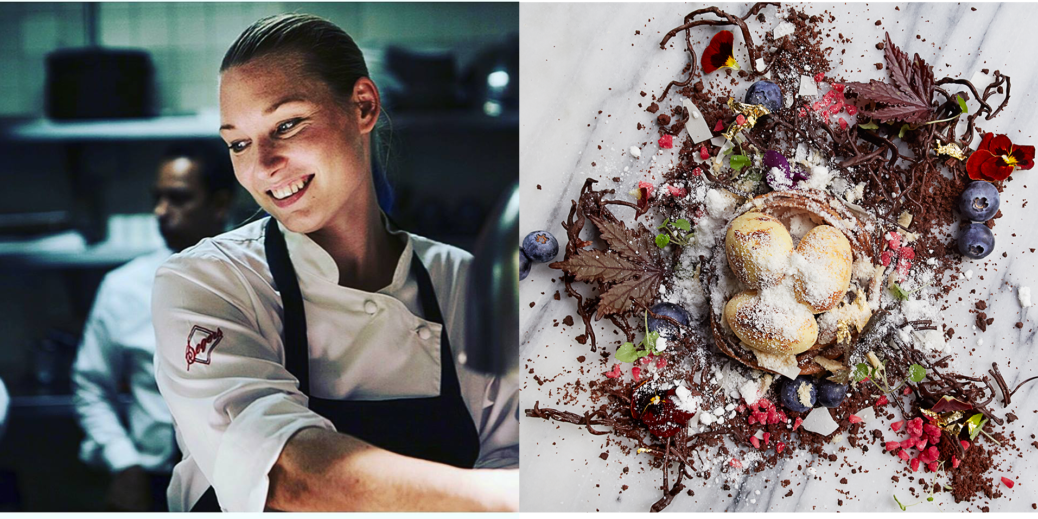 A chef can pinpoint the exact moment when she makes a connection to food: First, it’s what she cooks for herself and, as she increasingly discovers herself in restaurant kitchens, what she obsesses over before she sends painstakingly crafted servings out to nourish her guests.

For Emma Bengtsson, that moment – perhaps, more aptly, a series of moments – came as her grandmother introduced her to the traditions of Swedish cuisine.

They spent countless days at her grandmother’s house along Sweden’s West Coast, where Bengtsson learned humble lessons from an accomplished home cook – lessons that Bengtsson now brings to life every day she steps into the kitchen at Aquavit, one of Manhattan’s top-tier restaurants that, as evidenced by its eponymous name for the nation’s signature food-friendly spirit, specializes in Swedish cuisine.

After studying every restaurant role at Stockholm’s Hotel and Restaurant School, Bengtsson navigated the storied kitchens of her native country, starting with an internship at Edsbacka Krog, which then held the only two Michelin stars in Sweden. That led to working at the bistro Restaurant Prinsen before arriving at Operakällaren, where she cooked for five years at this historical and acclaimed restaurant in Stockholm’s Opera House.

Along the way, she carved a personal niche by specializing in Sweden’s oft-overlooked sweet tradition, earning rave reviews as a pastry chef.

Lured in 2010 to Aquavit, whose menu offerings across both its upscale and bistro dining rooms reflect Sweden’s 500-year-old culinary traditions, Bengtsson spent four years there as executive pastry chef and earned a name for her reinterpretations of classic Swedish desserts and the introduction of a new bread program.

But when she first was offered Aquavit’s executive chef role, she turned it down, not sure whether she was the right chef to guide Aquavit next. Fortunately for today’s diners, she changed her mind and almost immediately pushed the restaurant to the next level “with a lot of help. I could never have succeeded in this role without the support of everyone working in the restaurant, especially my kitchen staff.”

And she’s made a mark, as Bengtsson elevates Aquavit’s flavor and precision, earning the restaurant its second Michelin star. To her, it’s “the most significant mark I’ve made.” She is preparing for the opening this month of Aquavit’s first outpost in London.

Bengtsson recently shared her insights with us on Scandinavian cooking – both in Sweden and in America – as well as what motivates her in the kitchen each day. In addition, she revealed what inspires her and keeps her creativity flowing outside the kitchen.

My grandmother’s teachings are exhibited in the Aquavit kitchen every day. With her, I first learned to focus on the purity of an ingredient’s flavor, which is at the heart of Swedish cooking. That theory can be seen at work in every dish at Aquavit.

You worked in several highly acclaimed restaurants in Sweden, including at Operakällaren, whose owner was one of Aquavit’s original partners. You’ve talked about how Swedish kitchens are much different than American kitchens. How are you bridging that gap?

What do you consider the most important (or, perhaps instead, the most overrated) Swedish ingredient – and why? Is there something that you’d never try to reinvent?

For me, the most important ingredient is ättika, a type of very strong vinegar commonly used in Swedish cuisine but not so commonly found in the U.S. It’s a very potent vinegar, which is used in many ways. Most notably, it’s how Swedes do the bulk of our preserving, which is a central part of our culinary legacy.

Something I’d never reinvent? Any husmanskost – the most traditional Swedish dishes (akin to French bistro fair). These classic dishes – such as Swedish meatballs – have been perfected over the centuries and are cherished in the Swedish tradition. I would never try to radically change them.

You have deep roots in the pastry kitchen, and Swedish desserts perhaps unfairly don’t have as high a profile here as the nation’s savory dishes. But Swedes love their sweets. What makes a Swedish pastry special?

Swedish desserts use a lot less sugar. Instead of the overt sweetness found in most common pastries, Swedish pastries are focused on a concentrated flavor profile based upon seasonal ingredients, such as a strawberry in the summer or a hazelnut in the winter.

It’s well known that you initially turned down the executive chef role, but then earned Aquavit its second Michelin star within six months. That makes you only the second female chef – and first Swedish one – to run a two-star restaurant in the United States. How are you building on that success?

We were really excited in 2015 when Aquavit earned its second Michelin star. As for the effect it had – I’m not sure it has had a huge effect on our behavior. We’ve kept our heads down and our focus on what’s next. Our goals are the same.

What have you learned from your American customers, from their expectations of Swedish and Scandinavian food to their reactions to the evolution you have brought to Aquavit?

I’ve found most Americans are unaware of the diversity of Swedish cuisine. They come in expecting meatballs, which we have and love, but don’t realize how much more there is to the Swedish tradition. Most guests are pleasantly surprised and eager to learn about what else this legacy has to offer.

What’s your favorite dish on the current menu? And what was the inspiration behind it?

I never have a favorite. Having a favorite is dangerous because then you can get stuck replicating those flavors, without regard for what is working in the restaurant. Favorites are for the guests to pick. I listen to what their favorites are.

At Aquavit in New York, you’re in a destination food city. How do you know when to stay true to Swedish traditions and when to blur those culinary lines?

I have no interest in professionally cooking any other cuisines, although I love cooking with Southeast Asian flavors at home. With that said, Swedish cuisine is itself a mix of different culinary traditions, which have been in contact with Swedes over the centuries. Many of the flavors most associated with Swedish cooking, such as black cardamom, are not indigenous to Sweden. Only through incorporating the traditions and ingredients we’ve encountered throughout history, do we get “Swedish” cuisine.

As a farm-to-table proponent, what access do you have to the types of Scandinavian products that define your cuisine? Are you finding local suppliers for such things as fish and lingonberries that match the Nordic taste profile? And how are you helping to support your local suppliers?

Most items are found locally. The climate in the New York area is similar to that of Sweden, so you can find a lot of the same vegetables at the farmers’ market in New York City that you might find in Stockholm. This makes it feasible to source “Swedish” ingredients from our local farmers. With that said, there are items grown in cooler and more wooded areas, like lingonberries and cloudberries, which are not grown in the NYC area. Those we get from Canada – it’s a bit closer than Sweden.

Even chefs need to get out of the kitchen, and we understand that you enjoy bachata, a type of salsa dancing from the Dominican Republic. Does it allow you to escape your chef brain – or does it spark your creativity?

For me, it’s definitely an escape. It’s the only time I can shut my brain off from the kitchen. It started with salsa dancing at a club where they played a bachata song. I loved the different beat and technique I saw in the other dancers. I decided to learn and never looked back. Turns out I liked bachata more than salsa.

What can we expect next in Swedish cuisine? What are you seeing in your homeland that will be finding a place at Aquavit?

I truly try not to pay attention to trends, in Swedish cuisine and otherwise. At Aquavit, we aim to keep our focus on the evolution of our own kitchen, with as little outside influence as possible.

What is the one dish that you can take a single bite of and find yourself carried back to the western coast of Sweden? Why?

Growing up, I would eat tons of skagen salad and other shrimp dishes during the summers when my family would visit the archipelago outside of Gothenberg.

Skagen was never anything that we would make at home. We always bought it from the fish guy. The best part was that it was amazing: fresh, creamy and that we ate it out in the nature sitting on a rock with our feet in the water. It’s the memories about being a carefree kid in summer eating shrimp salad on fresh baguette with the sun on your face and your feet in the cold water.